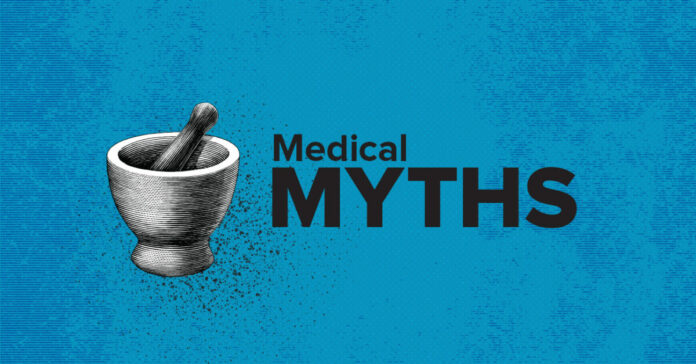 Welcome to the latest edition of our Medical Myths series. Today, to mark World Alzheimer’s Day, we will be tackling myths relating to both Alzheimer’s disease and dementia at large.

Today, an estimated 5.8 million people aged 65 years or older in the United States have dementia.

Due to the fact that the average lifespan of people in the U.S. has increased over recent decades, some experts project that by 2050, the number of older adults with dementia could reach 13.8 million.

Figures of this stature spark justifiable fear, and, as we have found in previous Medical Myths articles, fear tends to breed misconceptions.

In this article, we aim to dispel 11 of these myths.

This statement is not true. Dementia is not a normal part of aging.

According to a report that the Alzheimer’s Association published, Alzheimer’s disease, which is the most common form of dementia, affects 3% of people aged 65–74 years in the U.S.

This is not quite correct. Alzheimer’s is a type of dementia, accounting for 60–80% of all dementia cases. Other types of dementia include frontotemporal dementia (FTD), vascular dementia, mixed dementia, and Lewy body dementia.

The National Institute on Aging define dementia as “the loss of cognitive functioning — thinking, remembering, and reasoning — and behavioral abilities to such an extent that it interferes with a person’s daily life and activities.”

Although dementias share certain characteristics, each type has a distinct underlying pathology.

Alzheimer’s disease is associated with a buildup of so-called plaques and tangles in the brain. These structures interfere with brain cells, eventually killing them. In contrast, brain cell death in vascular dementia occurs due to a lack of oxygen, which can result from a stroke, for instance.

FTD, as another example, occurs when abnormal protein structures form in the frontal and temporal lobes of the brain, causing the brain cells in these regions to die.

A common myth is that dementia is purely genetic. In other words, if a person’s family member has a dementia diagnosis, they are guaranteed to develop dementia later in life. This is not true.

Although there is a genetic component to some forms of dementia, the majority of cases do not have a strong genetic link.

As we learned above, rather than genetic factors, the most significant risk factor for dementia is age. However, if a parent or grandparent developed Alzheimer’s when they were younger than 65 years, the chance of it passing on genetically is higher.

Early-onset Alzheimer’s is relatively uncommon, though. It occurs in about 5.5% of all Alzheimer’s cases.

As the majority of dementia cases are Alzheimer’s disease, this means that most dementia cases are not hereditary. FTD, which is much less common, has a stronger genetic link, but if a parent or grandparent develops the condition, it does not mean that children or grandchildren are guaranteed to develop it.

In the 1960s, scientists injected rabbits with high levels of aluminum. They found that the animals developed neurological lesions similar to those that form in the brains of people with Alzheimer’s.

Additionally, some studies have identified aluminum within the plaques associated with Alzheimer’s. However, aluminum also appears in the healthy brain, and researchers have not established a causal link between this element and the disease.

Following on from these studies, myths still circulate that drinking from aluminum cans or cooking with aluminum pots increases the risk of Alzheimer’s.

However, since those early experiments, scientists have not found a clear association between Alzheimer’s and using aluminum pots and pans.

Although researchers will, eventually, establish the precise relationship between aluminum and Alzheimer’s, consuming aluminum through the diet is unlikely to play a major role.

However, they also write that some research has found “a potential role for high dose aluminum in drinking water in progressing Alzheimer’s disease for people who already have the disease.”

Thankfully, this is not the case. Many people with a dementia diagnosis lead active, meaningful lives. Some people fear that if a doctor diagnoses them with dementia, they will no longer be able to go for a walk alone and will have to stop driving their vehicle immediately.

It is true that these adjustments may come in time as the condition progresses, but in mild cases of dementia, no changes may be necessary. As dementia worsens, changes to the way an individual leads their life are likely, but that does not mean that the person cannot lead a fulfilling life.

“Too many people are in the dark about dementia — many feel that a dementia diagnosis means someone is immediately incapable of living a normal life, while myths and misunderstandings continue to contribute to the stigma and isolation that many people will feel,” explains Jeremy Hughes, former Chief Executive of the Alzheimer’s Society.

Although memory loss can be an early symptom of dementia, it does not necessarily signify the start of this condition. Human memory can be unpredictable, and we all forget things occasionally. However, if memory loss is interfering with everyday life, it is best to speak with a doctor.

Although memory issues tend to be an early sign of Alzheimer’s disease, that is not the case for other forms of dementia. For instance, early signs and symptoms of FTD can include changes in mood and personality, language difficulties, and obsessive behavior.

This, unfortunately, is untrue. Importantly, though, certain factors can either reduce the risk of certain types of dementia developing or delay their onset.

For instance, the Lancet Commission’s 2020 report on dementia prevention, intervention, and care lists 12 factors that increase the risk of dementia:

Some of these factors are more difficult to modify than others, but working on changing any of them might help reduce the risk of developing dementia. The authors of the report explain:

“Together, the 12 modifiable risk factors account for around 40% of worldwide dementias, which consequently could theoretically be prevented or delayed.”

However, as Dr. Nancy Sicotte, a neurologist at Cedars-Sinai hospital in Los Angeles, CA, explains, “Reducing your risk requires starting these lifestyle changes from the get-go, not waiting until you’re 70.”

Linked to the section above, this is also false. To date, there is no strong evidence that any vitamin or mineral supplements can reduce the risk of dementia. In 2018, the Cochrane Library conducted a review with the aim of answering this question.

Their analysis included data from more than 83,000 participants across the 28 included studies. Although the authors report “some general limitations of the evidence,” they conclude:

“We did not find evidence that any vitamin or mineral supplementation strategy for cognitively healthy adults in mid or late life has a meaningful effect on cognitive decline or dementia, although the evidence does not permit definitive conclusions.”

In some cases, people with dementia might find it increasingly hard to make sense of the world around them. This confusion can be frustrating, and some individuals might respond to the emotions in an angry manner. However, this is not the case for everyone.

In a study involving 215 people with dementia, 41% of the participants developed aggression during the 2-year study. When they looked at factors that increased the risk of developing aggression, the researchers identified two of the primary factors as physical pain and a low quality relationship between the person and their caregiver.

Unfortunately, dementia can be fatal. According to a recent study, which appears in JAMA Neurology, dementia may be a more common cause of death than experts have traditionally thought it to be. The authors “found that approximately 13.6% of deaths were attributable to dementia over the period 2000–2009.”

Dementia worries people, especially as they age, and this is justifiable in many ways. However, it is important to counter misinformation that might enhance concerns and stigma.

For now, researchers are working tirelessly to develop better ways to treat and prevent dementia. In the future, hopefully, science will reduce the impact of dementia and, therefore, the fear associated with the condition.