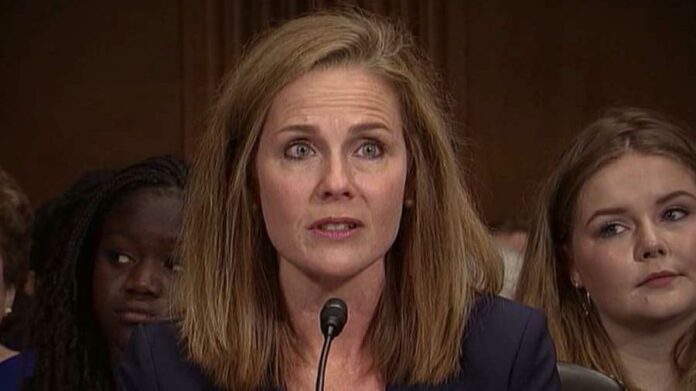 A media campaign has erupted against Amy Coney Barrett, even though President Trump hasn’t actually nominated her to the Supreme Court.

Barrett is clearly the front-runner, having spent a second straight day at the White House as the president moves toward his Saturday announcement. And of course there should be substantial scrutiny of her record if she’s picked, given that replacing Ruth Bader Ginsburg is a lifetime appointment.

But there are early signs this is going to be ugly, and that her religion will be front and center. That subject came up in 2017 when the Senate approved her as a federal appeals court judge in Chicago.

Newsweek jumped on the judge with a smear that turned out to be factually wrong.

PRESS POUNDS REPUBLICANS ON COURT VACANCY, BUT HYPOCRISY IS WIDESPREAD

Barrett is a devout Catholic, and the magazine described her (as previous profiles have) as a member of People of Praise, “the charismatic Christian parachurch organization, which was founded in South Bend, Indiana in 1971, teaches that men have authority over their wives. Members swear a lifelong oath of loyalty to one another and are expected to donate at least 5 percent of their earnings to the group.”

So she should be disqualified because of her religious affiliation? Isn’t that the essence of anti-Catholic prejudice?

Newsweek went a step further and invoked Margaret Atwood’s novel, “The Handmaid’s Tale,” “where women’s bodies are governed and treated as the property of the state under a theocratic regime.”

Uh, but Newsweek, in its zeal, tied the novel to the wrong group. Its correction:

“This article’s headline originally stated that People of Praise inspired ‘The Handmaid’s Tale’. The book’s author, Margaret Atwood, has never specifically mentioned the group as being the inspiration for her work. A New Yorker profile of the author from 2017 mentions a newspaper clipping as part of her research for the book of a different charismatic Catholic group, People of Hope. Newsweek regrets the error.”

As National Review puts it, “the attacks over the last few days have been steeped in anti-Catholicism, other types of bigotry, and lazy error.”

The liberal site Refinery 29 called Barrett “the Potential RBG Replacement Who Hates Your Uterus.” Yes, that would be a reference to her pro-life views. But Barrett and her husband have seven children, including one she carried to term after learning he would have Down’s syndrome, and two adopted from Haiti.

As for those who see her as a threat to Roe v. Wade, the New York Times noted that in 2016, Barrett “said that the core holding of Roe v. Wade was that women had the right to an abortion, and that was not likely to change in the future, but how states restrict abortion might. ‘I think the question of whether people can get very late-term abortions, you know, how many restrictions can be put on clinics, I think that would change,’ she said.”

Barrett is a onetime Antonin Scalia clerk with impeccable legal credentials. But there was a moment at her confirmation hearings that became a rallying cry for the Christian right. It was when Dianne Feinstein cited her Catholic beliefs as giving many on the Democratic senator’s side “this very uncomfortable feeling,” adding: “The conclusion one draws is that the dogma lives loudly within you.”

Judges are supposed to rule based on their reading of the law–Barrett is a “textualist”–and not their religious beliefs. But why is there an automatic assumption that she would do that? Joe Biden is a committed Catholic, and as a matter of public policy he supports abortion rights.

Jonathan Turley, the George Washington University law professor who testified against the Trump impeachment, writes in the Hill that “the late Justice Ruth Bader Ginsburg also was religious. She publicly declared: ‘I am a judge, born, raised and proud of being a Jew. The demand for justice, for peace and for enlightenment runs through the entirety of Jewish history and Jewish tradition.’ She noted that she was the only justice to have a mezuzah affixed to her office door…

Ginsburg regularly studied and attended conferences on Jewish religious law. She often discussed how she insisted the traditional certificates reading ‘the year of our Lord’ be changed as unacceptable for Jewish lawyers. She was right, of course, but her references to faith did not make her a religious zealot.”

SUBSCRIBE TO HOWIE’S MEDIA BUZZMETER PODCAST, A RIFF OF THE DAY’S HOTTEST STORIES

Democratic Sen. Joe Manchin agrees that certain arguments are out of bounds. “I’m Catholic, okay,” he told Fox News. “And religion should not enter into it. It sure doesn’t with me.”

Obviously, there’s going to be a huge political battle over Barrett or any other Trump nominee. Gone are the days when Ginsburg, Bill Clinton’s nominee, could by confirmed by a vote of 96-3, or Ronald Reagan’s nominee Scalia could be confirmed 98-0. (I remember that well, since I covered the Scalia hearings.)

Liberal lawyer Jill Filipovic writes on NBC’s website that “it would be such an insult to Ginsburg’s life and her work to appoint a judge like Barrett: someone who is happy to take advantage of the opportunities her predecessors created, who is smart enough to grasp how she got where she did and is nonetheless reactionary enough to help burn RBG’s legacy to the ground.”

But that’s why we have elections. I’d much prefer to see even a fierce ideological debate over Barrett and not a religious one.