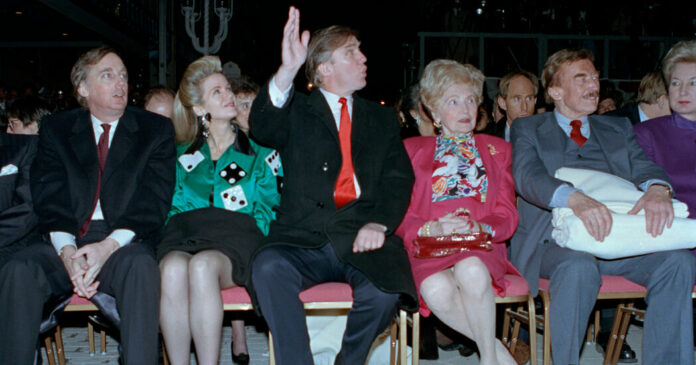 In her best-selling memoir, Mary L. Trump, President Trump’s niece, told a family story that detailed the ways in which she claims her relatives — the president among them — tricked, bullied and ultimately cheated her out of an inheritance worth tens of millions of dollars.

On Thursday, more than two months after the book was published and a little more than one month before the election, Ms. Trump told her story again — this time in a lawsuit.

The suit, filed in State Supreme Court in Manhattan, accused Mr. Trump, his sister Maryanne Trump Barry and their brother Robert Trump, who died in August, of fraud and civil conspiracy. It seeks to recover the millions of dollars Ms. Trump claims to have lost.

In its first sentence, the lawsuit says that, for the Trumps, “fraud was not just the family business — it was a way of life.” Beginning in the 1980s, the suit contends, the president and his siblings took control of the New York City real estate empire their father, Fred Trump Sr., had built and “exploited it to enrich themselves” to the detriment of everyone around them.

Ms. Trump, 55, claims to be one of her family’s victims. Her suit describes a plot against her, broken cinematically into three separate acts: “The Grift,” “The Devaluing” and “The Squeeze-Out.”

It recounts a narrative that began in 1981, when Ms. Trump’s father, Fred Trump Jr., unexpectedly died, leaving her, at age 16, with a valuable minority stake in the family empire. The story ends nearly 40 years later, when Ms. Trump says she discovered, with the help of journalists from The New York Times, that President Trump and his siblings “used their position of power to con her into signing her interests away.”

The White House has previously cast doubt on Ms. Trump’s book, which contains similar allegations, and has said the memoir was “in Ms. Trump’s own financial interest.”

The family lawsuit was the latest legal action to make claims against the president in his personal capacity. Earlier this month, the Justice Department moved to assume responsibility for defending Mr. Trump against a defamation suit brought against him by the writer E. Jean Carroll, who has alleged he raped her in a Manhattan department store in the 1990s.

In August, the New York attorney general’s office revealed in court papers that it had intensified an investigation into whether Mr. Trump and the Trump Organization had committed fraud by overstating assets to get loans and tax benefits.

In a statement issued by her lawyer, Roberta Kaplan, Ms. Trump said her family had betrayed her by “working together in secret to steal from me” and by “conning me into giving everything away for a fraction of its true value.”

“I am bringing this case,” she added, “to hold them accountable and to recover what is rightfully mine.”

When Fred Trump Jr., the president’s older brother, died from an alcohol-induced heart attack in the early 1980s, he left Ms. Trump, his daughter, a profitable portfolio that included a stake in nearly 1.8 million square feet of prime Trump family real estate in Brooklyn and a portion of a group of property partnerships known as the Midland Associates Group.

Because Ms. Trump was a teenager at the time and had only a “cursory knowledge” of the value of her holdings, the portfolio was overseen by Mr. Trump and his siblings, who, the lawsuit says, had a fiduciary responsibility to look after her interests.

Instead, the suit maintains, Ms. Trump’s aunt and uncles embarked on “a complex scheme” to siphon money away from her by, among other things, taking “exorbitant management fees, consulting fees, and salaries” from the companies she had a stake in and by issuing loans to themselves from businesses she controlled that “included no terms of repayment.”

At the same time, the suit contends, Mr. Trump and his siblings worked with a “friendly appraiser” to “grossly understate the value of Mary’s interests,” even as they “fostered the impression that everything was OK.”

In 1999, when Fred Trump Sr. died and his will was to be executed, Mr. Trump and his brother and sister sought to gain control of Ms. Trump’s portion of the empire, according to the suit.

That October, for example, Robert Trump met Ms. Trump in the Drake Hotel in Midtown Manhattan and threatened that he and his siblings would “bankrupt” Midland, the partnership group she had a stake in, if she did not comply with their demands, the lawsuit says. The suit quotes Robert Trump as telling his niece that the move to destroy the company was designed to leave her financially liable for debts she could not afford.

Initially refusing to give in to her family, Ms. Trump and her brother, Fred Trump III, contested Fred Trump Sr.’s will in March 2000, saying it was not fair to them. But according to the lawsuit, her aunt and uncles “ratcheted up the pressure.”

At Ms. Trump Barry’s suggestion, the suit contends, the family cut off health insurance payments to Ms. Trump and her brother — “an act of unfathomable cruelty,” because one of Fred Trump III’s children had cerebral palsy and required round-the-clock nursing care.

Finally, as Ms. Trump’s legal fees began to mount, Mr. Trump and his siblings “exploited the opportunity” and tried to “squeeze Mary out of her interests altogether,” the suit maintains. They told her they would not settle the probate case or reinstate her health care unless she relinquished her stake in Midland and her Brooklyn real estate holdings, according to the suit.

Even then, the suit claims, they provided Ms. Trump with inaccurate financial statements and “valuations riddled with deliberate falsehoods” in an effort to drive down the amount they had to pay her.

The Trump family “not only deliberately defrauded Mary out of what was rightfully hers, they also kept her in the dark about it — until now,” the lawsuit says.

Ms. Trump’s book, “Too Much and Never Enough: How My Family Created the World’s Most Dangerous Man,” sold more than one million copies in its first week despite a lengthy effort led by Robert Trump to stop its publication. A clinical psychologist, Ms. Trump has since become a fixture on the talk-show circuit, describing her family’s internal dynamics and fiercely criticizing the president.