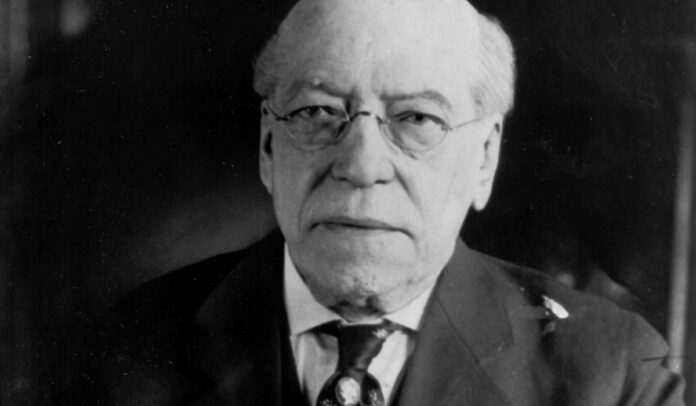 Mark Mix, a tireless fighter for “right to work” laws that guarantee a person cannot be compelled to join a union or pay union dues, says he knows exactly whom he would like to speak for his cause: Samuel Gompers.

Gompers stands as a colossus in the history of America’s organized labor movement, yet Mr. Mix sees him as someone who understood the virtue of making union membership voluntary.

“‘I want to urge devotion to the fundamentals of human liberty — the principles of voluntarism,’” said Mr. Mix, quoting Gompers from the 1924 convention of the American Federation of Labor, which he founded. “‘No lasting gain has ever come from compulsion. If we seek to force, we but tear apart that which, united, is invincible.’

“Well,” Mr. Mix said admiringly, tossing the quote off from memory, “if we were hiring a spokesman, we’d hire Gompers.”

Few, if any, of the modern unions that have grown out of what Gompers and others constructed would hire Mr. Mix, or indeed have anything at all to do with the National Right to Work Legal Defense Foundation that he leads.

The foundation is not a law firm, per se, though it employs lawyers who work strictly pro bono for clients. If unions are known to be tough fighters, the foundation matches them. Attorneys are forbidden from settling cases on behalf of the foundation, only at the behest of the clients.

Boosted by the 2018 landmark Supreme Court decisions in Janus v. American Federation of State, County and Municipal Employees (AFSCME) that stopped mandatory dues payments for government workers, the right-to-work fight went from being mostly a distraction for Big Labor to a genuine movement.

“Oh, for the first 20 years we were on defense, definitely on defense all the time,” Mr. Mix recalled. “We were like a gnat flying around the AFL-CIO.”

But the notion that union membership or dues should not be compulsory has resonated with federal judges and everyday Americans, a majority of whom favor voluntary membership.

Gallup’s recent polling shows that 65% of American adults support labor unions, which is the highest level since 2003, though that does not reflect opposition to getting a choice about whether to join or pay dues.

The last time Gallup asked about right-to-work laws, in 2014, more than 70% of American voters supported that as well.

When Mr. Mix grew up, there wasn’t any question about whether he would take a pro-union line. His stepfather was a welder and a rock-ribbed member of the International Association of Merchants.

Mr. Mix, now 58, also idolized a teacher at his high school who was also the town mayor and a lifelong Democrat.

Consequently, Mr. Mix’s political life began as a Democrat and he would help raise funds for Democratic candidates. That solid liberal beginning deepened at Alfred University.

Through a series of events, Mr. Mix found himself at James Madison University in Harrisonburg, Virginia, among a motley house crew that included housemates he described as “a drug addict, a jock and a Confederate rebel.” He encountered the books by Ayn Rand and some new economic ideas in the classroom, “and everything started to look a little different,” he said.

He started with The National Right to Work Legal Foundation the day after Christmas 1986, spent his first years driving around the country passing or defending right to work laws in 14 states and has been at it ever since.

“It was incremental, the improvement, for a long time,” he said. “The unions would give up an employee now and then, but they didn’t want to lose a big case.”

Even today, Mr. Mix argues that the battle is misconstrued. It is not a question of unions or no unions, in his telling. Rather it is about unions with legally confiscated money or unions with freely given money.

“It has become a regressive, socialist movement,” he said of present-day unions. “You should not be able to force someone to pay you for the privilege of working. Organized labor is one of the most privileged private groups in America. There are some laws saying you have to pay them.”

Legal decisions have chipped away at that compulsory financing. Victories in Knox v. Service Employees International Union in 2012 and in Janus were rooted in years of work educating people much more than in changing judges, in Mr. Mix’s telling, as even the thinking of conservative figures such as Antonin Scalia evolved on the topic.

“We have always made the First Amendment argument, about the freedom of speech and association,” he said. “Scalia, for instance, was always a work in progress because his initial response would always be, ‘The legislature is the site of the original sin. You have to go to the legislature.’”

The same has been true for other Republican figures who might be assumed to be right-to-work supporters, such as former Govs. Mitch Daniels in Indiana and Scott Walker in Wisconsin.

They, too, first opposed right-to-work laws, but they came to favor them when persuaded that voluntary union membership and dues-paying had the backing of a majority of their constituents.

Mr. Mix and his allies are facing one of their biggest challenges in years. Democratic presidential nominee Joseph R. Biden has embraced the union’s fondest dream: a federal statute that would wipe out in a stroke all state right-to-work laws.

A Biden administration could mark a reversal of Big Labor’s ebbing clout. In 2017, union members represented 10.7% of the workforce, just half the 20.1% unionization rate of 1983, itself a significant decline from the one-third of the labor force in the 1950s.

Yet unions still represent an important money source for Democratic politicians. In the 2016 election cycle, groups and individuals associated with organized labor poured $217 million into races, and 90% of that total went to Democrats, as it has for at least the past two decades, according to the Center for Responsive Politics.

In the current election cycle, campaign finance tracked by OpenSecrets shows 20 unions have poured more than $100 million into political campaigns. Nearly a quarter of that came from the two largest teachers unions: the National Education Association and the American Federation of Teachers.

Most of that money is being spent in hopes of passing the Protecting the Right to Organize Act, which a Biden administration would back. For now, it languishes in Congress after passing in the House on a party-line 224-194 vote in February.

Mr. Mix understands the fight remains joined but hopes recent history proves an ally. To buttress that hope, he has a memento suspended from his office ceiling.

It arrived in a UPS box on Dec. 17, 2012, and though it had no return address Mr. Mix knew who sent it. It settled a bet he had made with a pro-union friend.

“After Indiana had approved a right-to-work bill, I told him they were coming for Michigan next, and he said Michigan would pass a law like that when pigs fly,” Mr. Mix chuckled. “So now I have a pig flying in my office.”