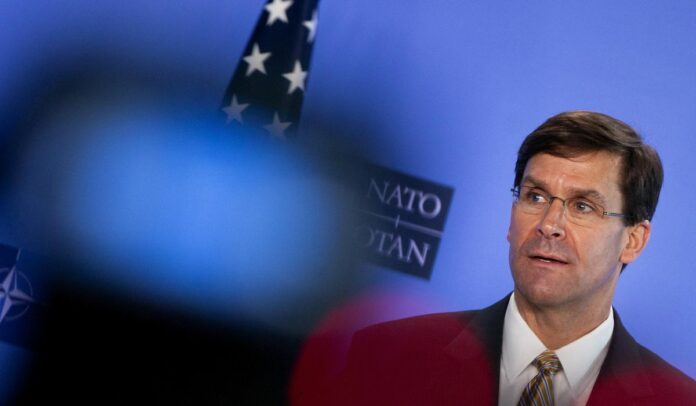 A rash of resignations has left U.S. military leaders scrambling to fill vacancies in key positions throughout the Pentagon and has sparked a standoff with lawmakers who are convinced that President Trump’s personal politics drive hirings, firings and promotions inside the Defense Department.

The Pentagon over the past three weeks has been given at least four high-level resignations, including from top officials who had privately raised concerns with some of Mr. Trump’s foreign policy moves, most notably the decision last year to temporarily halt military aid to Ukraine.

The president’s recent threat to use active-duty troops to suppress nationwide riots — a threat he ultimately decided against — also has had a chilling effect throughout the Pentagon. It has even led to public friction between Mr. Trump and Defense Secretary Mark Esper and sparked an almost unprecedented wave of military criticism aimed at the commander in chief.

But critics say that overt resistance to Mr. Trump raises its own long-term questions of civilian-military relations and could draw the Pentagon into the partisan fights it has long sought to avoid.

Mr. Trump’s influence on personnel moves now is coming under an even harsher spotlight. Last week, Sen. Tammy Duckworth, Illinois Democrat, vowed to block the Senate confirmations of more than 1,100 senior military promotions until Mr. Esper confirmed the promotion of Army Lt. Col. Alexander Vindman, who offered testimony in the House’s impeachment inquiry against the president.

On Wednesday, his lawyer said Col. Vindman will retire from the Army.

Col. Vindman and his twin brother, a National Security Council aide, were abruptly dismissed from their White House posts in February.

While deep concerns over political retribution exist inside the Pentagon, specialists say, the wave of resignations goes beyond that. They argue that a perfect storm of circumstances has come together: the usual exodus during the final months of any presidential term, frustration with Mr. Trump’s policies among top Pentagon officials, and a White House that increasingly feels it has to get genuine supporters of Mr. Trump’s agenda into key posts if the president’s often untraditional foreign and military policies are to be carried out.

“Even if the president wins a second term, they know there’s often a turnover in personnel. And they might get caught in that,” said Mark F. Cancian, senior adviser at the Center for Strategic and International Studies and a former official in the Defense Department and the White House Office of Management and Budget. “There’s no guarantee you’ll be able to stay in your job. … So a lot of people bail before the election.

“And I think Trump is getting more comfortable firing people,” Mr. Cancian said. “I think it’s a combination of those things.”

For Pentagon leaders, the exits have come at a crucial time. The military is dealing with a long-term strategy shift to face a growing threat posed by China, is implementing an unexpected redeployment of troops from Germany ordered by Mr. Trump, and is managing a major drawdown of forces from Afghanistan. That list does not even include the COVID-19 pandemic, which has slowed training and deployments, sidelined aircraft carriers, and forced the Pentagon to direct huge amounts of time and resources toward domestic medical assistance and research into a coronavirus vaccine.

The resignation trend, however, began even before those issues emerged. In December, at least five top Pentagon officials announced their departures. They included Randall G. Schriver, a key policy voice who served as assistant secretary of defense for Asian and Pacific security.

At least two influential retired generals pulled their support for Gen. Tata after those Twitter posts were revealed.

As that nomination worked its way through the Senate, the Pentagon was hit with another wave of resignations.

Acting Pentagon Comptroller Elaine McCusker announced her resignation June 16 after she was passed over for the permanent post. Ms. McCusker acknowledged raising concerns about the White House freeze on aid to Ukraine last year, an issue that ultimately led to the president’s impeachment in the House. He was acquitted by the Senate.

On June 18, Kathryn Wheelbarger, acting assistant secretary of defense for international security affairs, announced her resignation. Ms. Wheelbarger was expected to move on to a top intelligence post inside the Pentagon, but the White House pulled her nomination.

Ms. Wheelbarger served as a top aide on the Senate Armed Services Committee during the chairmanship of Sen. John McCain, a top political enemy of the president. She was also viewed as a close ally of former Defense Secretary James Mattis, who resigned in protest in late 2018 over Mr. Trump’s Syria policy.

Her resignation, perhaps more than all of the others, seems to have struck a nerve with current and former Pentagon officials.

“She is someone I got to know well over the last three years and, with sincere appreciation for her many contributions and years of service, I wish Katie the very best in what I’m sure will be a very bright future,” Mr. Esper said in a statement last month.

“Katie Wheelbarger is one of the most talented and dedicated public servants with whom I’ve ever had the privilege to serve. It is a mistake not to promote her to higher levels of service at this time,” Mr. Schriver told Politico last month.

The week after Ms. Wheelbarger’s exit, Michael Griffin, the Pentagon’s undersecretary of research and engineering, and his top deputy, Lisa Porter, submitted their resignations.