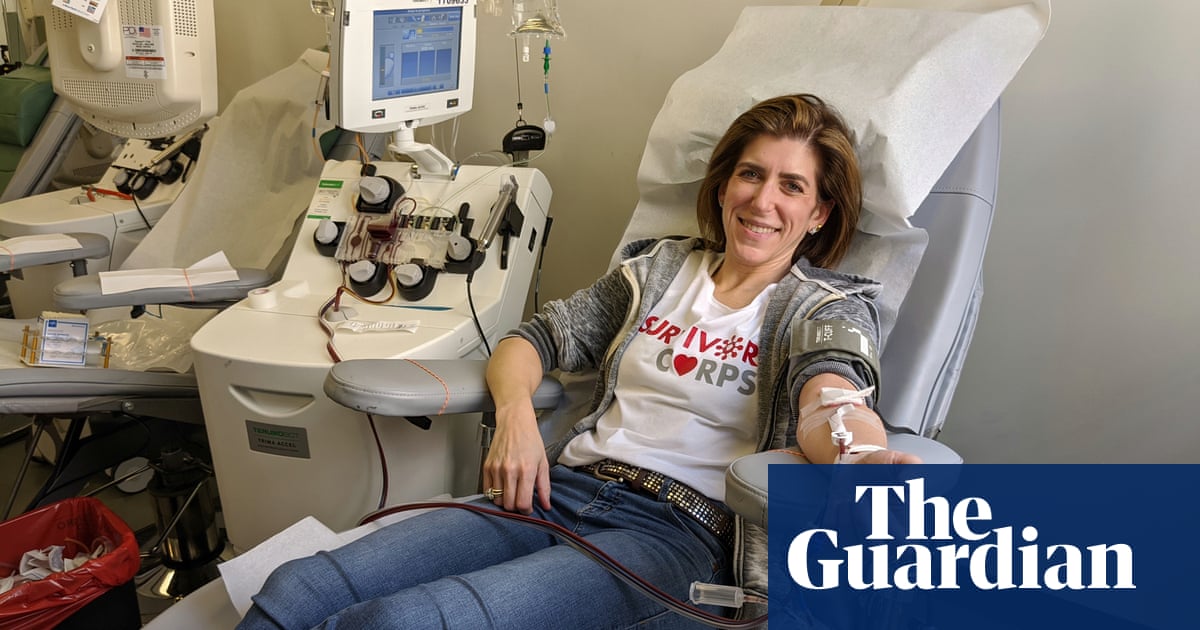 Cary Blumenfeld and his wife, Leann, who is pregnant, were looking forward to welcoming a new member to their family. The timing was perfect. Both of their young sons were enjoying school. Business was thriving; they had just had a record year selling real estate in Atlanta. But then, one by one, the family fell ill with Covid-19.

It was Leann who got sick first, then Cary. Leann’s father, Steven Feldman, sent text messages and called daily to check in on them. It was around that time, too, that he began to exhibit similar symptoms to Cary. Fevers. Raging headaches. Strange taste sensations.

Just as the Blumenfelds were beginning to recover, Steven took a turn for the worse. He started having trouble breathing. An ambulance was called, and he was intubated that same night. The doctors tried everything to clear the virus, including hydroxychloroquine, but Steven’s condition showed little signs of improvement.

Running out of options, Cary contacted relatives in the medical profession and began discussing the use of convalescent plasma with Steven’s physicians, who advised it could be done for compassionate use.

Convalescent plasma is the liquid component of blood that can be collected from patients who have recovered from an infection. When somebody overcomes an illness, they produce life-saving antibodies – protective blood proteins that ward off antigens, like viruses – and those remain within the blood for a period of time (usually up to three months).

Under new FDA guidelines, only eligible blood donors who have had a documented diagnosis of Covid-19, and remain asymptomatic for at least 14 days post-recovery, may donate their plasma.

The idea is that these antibodies “can give a temporary assist by interfering with the virus until that person mounts an immune response,” according to the MIT Technology Review.

Cary’s family immediately put out a video through a local TV station asking for people who had survived the illness to donate blood, and got hundreds of responses – three of which resulted in the first donations of this kind to be made in the south-east United States.

But this is not a new method. It has been tried and tested for over a hundred years on numerous illnesses, most recently for diseases such as Ebola, as well as Sars, Mers and 2009 H1N1, otherwise known as swine flu. In China, there are even some scattered examples of severely affected patients with Covid-19 who have undergone the procedure and shown some signs of recovery. However, these pilot studies have not been proven with complete certainty.

One report from the state-owned Chinese pharmaceutical company Sinopharm concluded: “The optimal dose and time point, as well as the clinical benefit of convalescent plasma therapy, needs further investigation in larger well-controlled trials.”

Normally, this sort of research would take years to bring to fruition, but Dr Eldad Hod, an associate professor at Columbia University Vagelos College of Physicians and Surgeons, is confident that their collaboration and data-sharing arrangements with institutions such as Johns Hopkins University and the Mayo Clinic can help expedite that process.

This “liquid gold”, says DR Hod, in reference to the colour of plasma, has a wide range of potential prophylactic and medicinal uses, from preventing illness among frontline healthcare workers to treating patients in critical care units – like Steven.

Randomised clinical trials are due to begin next week. In addition to supplies, Dr Hod estimates that the university will need to build up an inventory of 400 units of plasma in its blood banks to support this study. A single Covid-19 survivor can provide enough plasma to treat two or three other patients.

Once a national resource of convalescent plasma has been gathered, academic laboratories will need to work with industry partners to extract the antibodies so that they can create hyper-immune globulin, vials of purified antibodies, which are easy to ship worldwide (unlike plasma). This is already done with treatments for rabies, for example.

“If we continue to have a supply, that might buy us time to develop new vaccines or new treatments [that can defeat the virus],” he adds.

Fortunately for researchers, the supply side of the equation has been solved by Survivor Corps, a growing grassroots movement of 32,000 Covid-19 patients and survivors. The group posts regular updates of blood centres accepting donations and links to clinical trials. So far, the Columbia trial has had to waitlist 2,000 respondents because their programme facilities are oversubscribed by Survivor Corps members.

“We are flooding these programmes with volunteers,” says Diana Berrent, the group’s founder.

In mid-March, the Long Island resident woke up feeling as if she “had an anvil” on her chest. She saw it as her civic duty to get tested, but found it next to impossible to do so until she wrote a letter to her local council and posted it on Facebook. It wound up getting the attention of Congressman Tom Suozzi, who intervened to have her tested.

A lawyer-turned-photographer, she chronicled her journey to recovery through a video diary series with the New York Post, covering everything from how to set up the perfect isolation room to a magic show her son performed outside her bedroom window.

We need to take the fear out of all this, says Diana. To that end, she has recorded her experiences giving blood to Columbia, Vir Biotechnologies and numerous other initiatives, all in an effort to demystify the 32-minute procedure, which she described as painless.

“It was one of the most satisfying moments of my entire life, including getting married and having children. Not many people could say that they saved a single life in their lifetime,” she adds.

Jillian Finn is a recently joined member of Survivor Corps, who contracted Covid-19 during her year abroad studying in Europe.

“You see a lot of people on the group posting for their family and sharing pictures of them,” she says. “They’re asking for help, and it’s really hard to hear that these horrible things are happening, so if you can donate, why wouldn’t you?”

For families like the Blumenfelds, who contracted Covid-19 at an approximate time to their loved ones, it is all the more excruciating because, in most cases, they have not surpassed the 14-day mark of being asymptomatic to qualify for a transfusion.

In Cary’s father case, it took two days to run tests on the plasma before it was safely administered on Thursday.

“Staff at the hospital started seeing slight, slight improvements about 48 hours after the plasma treatment,” Cary says. “The oxygen from the ventilator decreased by 2 to 3%. And the doctors started weaning him off his sedation medications. He opened his eyes. The nurses asked him: ‘Do you know you’re at Northside hospital?’ And he nodded his head.”

At present, the hospital is shut to visitors and none of the family has been able to be by Steven’s bedside.