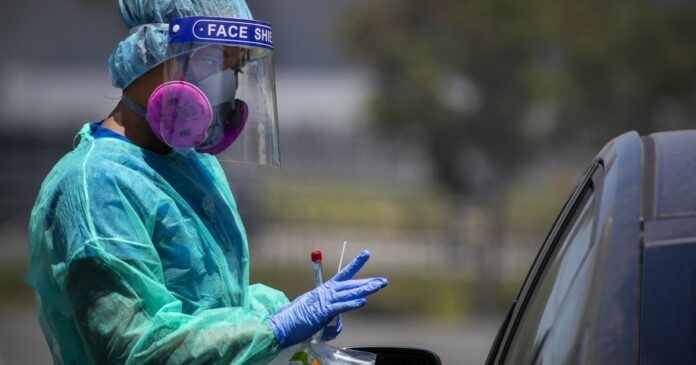 Los Angeles County officials have announced another record-breaking day among patients hospitalized for the coronavirus.

More than 155,000 people have been infected in the county since the pandemic began, and officials said that as of July 9, healthcare workers and first responders accounted for 10,450 cases. That number is up more than 1,000 from the week prior, the largest increase among those professions.

Sixty-three healthcare workers have died from COVID-19, Public Health Director Barbara Ferrer said Monday. Nurses account for 49% of those deaths, and of those who have died of coronavirus-related infections, nurses in skilled nursing facilities account for 71%.

There also have been 812 cases of COVID-19 among pregnant women, as of July 17, health officials said. Of those, 79% were symptomatic, and there has been one death among pregnant women — a number first reported weeks ago. No newborns have tested positive for the virus.

Like all Latino residents, pregnant Latina women have been disproportionately affected by the virus, accounting for 3 out of every 4 cases of pregnant women who have contracted the virus, data show.

“This inquiry is a mirror image of what the Latinx community has experienced since the pandemic began,” Ferrer said.

Many Latino residents are essential workers, Ferrer said, and may bring the infection home to their pregnant partners. Of the 3,820 people who have died where race and ethnicity has been identified, officials have said that 47% have been Latino.

Officials are currently responding to more than 1,000 outbreaks of the virus, Ferrer said.

Although contact tracing remains a key tool in the fight against the spread of the disease, Ferrer said its methods can’t be fully relied on.

While the county has added more contact tracers — totaling more than 2,500 — tracing doesn’t occur in public spaces and is only as effective as contacted individuals allow it to be. For example, of the roughly 57,000 people of the contacted individuals who completed an hour-long phone interview with a contact tracer, only 57% provided information on their close contacts and employers. Many cited fear over such information affecting their housing, job status or relationships.

“We are limited in our ability to force people to share important information,” Ferrer said.

The disease has become most prevalent in the relatively young, with roughly 53% of the latest infections occurring in people younger than 41, and 52% of the cases to date in the county occurring in that age group. Supervisor Kathryn Barger said that the increase accounts for activity seen over the Fourth of July weekend and in the weeks prior.

L.A. Mayor Eric Garcetti repeated a dire warning over the weekend that the city is on the brink of fully shutting down again. The mayor blamed a rapid reopening of the economy and people becoming less vigilant about following public health guidance for the rise in the number of infections.

The city is in an orange-level threat territory, the second highest of the color-coded categories he unveiled in early July. But if the situation escalates — for example, if hospital capacity becomes limited — the threat assessment could move to red, which would lead to a total shutdown, Garcetti warned.

“I stand behind the decisions we made [to reopen],” Barger said in response to Garcetti’s comments. “I think it’s unfortunate for us to be debating what we should have done. We need to look forward.”

Among a troubling spike in the number of coronavirus cases across California, Gov. Gavin Newsom announced a bit of positive news on Monday: The rate of positive infections over the past 14 days has held steady, while the seven-day average has dipped slightly.

Newsom reported that the statewide positivity rate has remained at 7.4% for the past two weeks and that the one-week average for positive infections decreased from 7.7% to 7.2%.

A more concerning number, however, is the hospitalization rate, which has increased by 16% over the past 14 days. Still, that number is a smaller overall increase when compared to the weeks before.

But, Newsom warned, the numbers apply to the state as a whole, which has confirmed more than 337,000 infections and 7,716 coronavirus-related deaths.Several counties are still experiencing a surge in infections.

“County-by-county, things look very differently than they do statewide,” the governor said. “We are in the midst of this pandemic — it is not going away any time soon.”

Los Angeles is one of 33 counties the state is monitoring for a surge in cases and hospitalizations.

While some counties, like San Francisco, have moved off and on the state’s watch list over the last few weeks, L.A. County has remained for the better part of a month.

The county is also above the 8% positivity rate the state has called for.

On Sunday, officials reported a record number of COVID-19 patients in hospitals: 2,216. Of those, 26% were in intensive care, and 19% are on ventilators. It was the fifth consecutive day the county saw more than 2,100 patients in hospitals and the first day that number surpassed 2,200.

Despite the increase, the county is still in good shape with the number of available hospital beds, officials said.

More than 1.5 million county residents have been tested for the virus, and 10% have tested positive, as of Sunday, data show. The seven-day average for positive infections is at 8.8%.

An experimental vaccine trial in the U.S. is scheduled to begin soon. Roughly 30,000 people, including Californians, will be enrolled.

Scientists at Oxford University recently announced that an experimental coronavirus vaccine has been shown in an early trial to prompt a protective immune response in hundreds who got the shot. Researchers began testing in April in about 1,000 people, and half received the experimental vaccine.