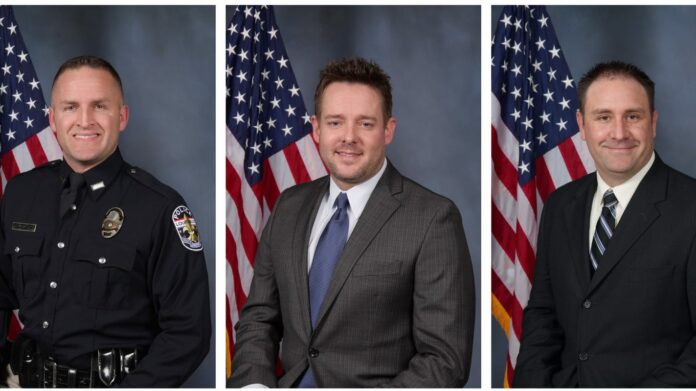 LOUISVILLE, Ky. – A former detective with the Louisville police department has been indicted on felony charges of wanton endangerment after shooting into the an apartment next door to Breonna Taylor, the 26-year-old EMT who was killed in her own home by police.

Brett Hankison, who was fired in June, is facing three felony counts and bail was set at $15,000. A warrant has been issued for his arrest.

Two other officers involved in the shooting, Sgt. Jonathan Mattingly and Detective Myles Cosgrove, were justified in their use of force, state Attorney General Daniel Cameron said at news conference. All three fired their weapons at Taylor’s apartment.

A wanton endangerment charge is a class D felony and carries a penalty of one to five years in prison.

The charges read by Judge Annie O’Connell on Wednesday said that Hankison “wantonly shot a gun” into adjoining Apartment 3. The occupants of that apartment were identified by initials. None of them were BT – Breonna Taylor.

That means the grand jury did not find that Hankison wantonly fired into Taylor’s apartment the night she died or that any of the officers are criminally liable in her death.

In May, Taylor’s neighbor, Chesey Napper, filed a lawsuit against the LMPD officers, claiming that the officers’ shots were “blindly fired” and nearly struck a man inside. Napper was pregnant and had a child in the home, according to the lawsuit.

Cameron said Wednesday that the grand jury decided homicide charges are not applicable because the investigation showed that Mattingly and Cosgrove were justified in returning deadly fire after they were fired upon by Kenneth Walker, Taylor’s boyfriend, who has said he didn’t know police were at the door.

He said there was “nothing conclusive to say” that any of Hankison’s bullets hit Taylor.

“Justice is not often easy and does not fit the mold of public opinion. And it does not conform to shifting standards,” Cameron said. “I know that not everyone will be satisfied with the charges we’ve reported today.

“My team set out to investigate the circumstances surrounding Ms. Taylor’s death. We did it with a singular goal in mind: pursuing the truth. Kentucky deserves no less. The city of Louisville deserves no less. If we simply act on emotion or outrage, there is no justice. Mob justice is not justice.”

Cameron said he would create a task force to review the process of securing, reviewing and executing search warrants in Kentucky. It will be a “top-to-bottom review of the search warrant process,” he said.

Around 200 protesters gathered at Jefferson Square Park in downtown Louisville as the announcement was played on a loudspeaker. They almost immediately began chanting “No justice, no peace.”

“I’m heartbroken,” Logan Cleaver, a protester, said Wednesday immediately after the grand jury’s decision was announced. “This is not a justice system if it’s not for everybody.”

A visibly upset Tamika Palmer, Taylor’s mother, traveled to Cameron’s announcement in Frankfort but left without commenting. Attorneys for the Taylor family said they would not be talking or issuing a statement.

Taylor’s sister, Juniyah Palmer, posted a picture on Instagram of her with Breonna, saying, “Sister, I am so sorry.”

Ben Crump, a nationally renowned civil rights attorney who is representing the Taylor family, tweeted that Hankison should have been charged with “wanton murder.”

“This is outrageous and offensive!” he said.

The announcement comes after Cameron’s office presented its findings to the jury earlier this week. His team has been investigating the Taylor shooting since May.

The uncertainty swirling around the decision on possible criminal charges in Taylor’s death has drawn both local and international attention as protesters have marched and chanted on Louisville’s streets for 119 consecutive days. Protesters in Louisville and supporters across the U.S. have called for “justice for Breonna” and other Black Americans, such as George Floyd in Minneapolis, who have been killed by police.

In anticipation of Cameron’s announcement, Louisville Mayor Greg Fischer invoked a 72-hour curfew, effective Wednesday night, from 9 p.m. to 6:30 a.m. A week ago, Fischer announced the city agreed to a $12 million settlement with Breonna Taylor’s family that includes more than a dozen police reforms.

Downtown Louisville has taken on the appearance of a city under siege, with plywood nailed across business fronts and concrete barriers cordoning off a 25-block perimeter.

Protesters will still be able to access downtown on foot to demonstrate and retain their First Amendment rights, city officials said.

“I hope all of this is not needed,” Schroeder said.

Through it all, Cameron, a rookie Republican attorney general elected in November 2019 and a protege of Majority Leader Mitch McConnell, has stayed quiet. Until the decision came down Wednesday.

Mattingly, Cosgrove and Hankison have faced intense public scrutiny – and threats – in the six months since Taylor died and her case gained national attention.

Mattingly, who was shot during the raid, and Cosgrove have been on administrative reassignment since March. Hankison, meanwhile, was fired in June after the interim police chief determined the evidence showed he fired indiscriminately into Taylor’s apartment.

Mattingly and Cosgrove, as well as four other LMPD officers, still face an internal investigation for possible violations of department policy in the Taylor shooting that could potentially cost them their job.

Taylor, a 26-year-old ER technician, was killed after officers used a “no-knock” search warrant at her apartment shortly before 1 a.m. on March 13, looking for drugs and cash as part of a larger narcotics investigation connected to her former boyfriend.

When the door burst open, Taylor’s boyfriend, Kenneth Walker, fired a single shot from his Glock handgun. Police said that round hit Mattingly in the thigh, severing an artery.

Mattingly, Cosgrove and Hankison fired more than two dozen rounds in response, spraying the apartment and hitting Taylor six times. Taylor, who was unarmed, died in her hallway.

Walker has since filed a lawsuit against the department, arguing he is a victim of police misconduct and seeking immunity from prosecution.

Cameron’s office obtained the police department’s Public Integrity Unit investigation into the officers’ conduct on May 20. The duration of the investigation prompted questions from public officials and impatience from onlookers demanding justice for Taylor.

In 2020, unprecedented protests have swept through Louisville and the US. Why now?