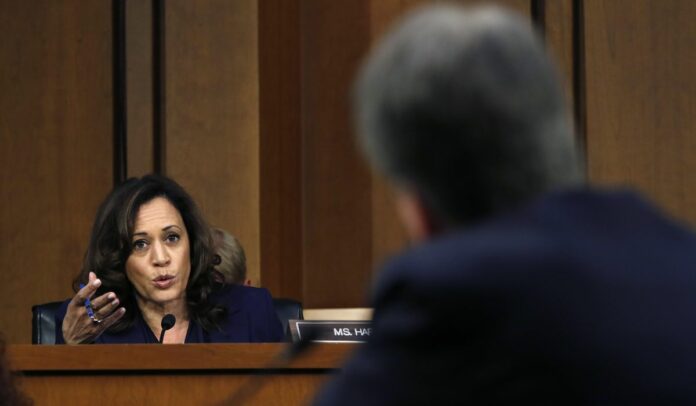 When Sen. Kamala Harris went toe-to-toe with Justice Brett Kavanaugh at his confirmation hearing, things didn’t quite work out as planned.

The California senator suggested he had compromising conversations about the special counsel probe into Trump-Russia collusion — an allegation he vehemently denied, defusing her bombshell of a question.

Democrats hope Ms. Harris, now the party’s vice presidential nominee, has the goods this time to be the master inquisitor and anti-confirmation chief against the president’s third Supreme Court nominee.

“Her voice in these hearings or in the campaign, focusing the American people on what is at stake — what is on the ballot — health care, reproductive rights, labor rights, LGBTQ rights, I think she will be very compelling,” said Sen. Chris Coons, a Delaware Democrat who sits on the Judiciary Committee with Ms. Harris.

Her spot on the panel will put the Democratic ticket front and center in the confirmation fight that is poised to overtake the presidential race, with the hearings expected in mid-October.

It’s also considered an ideal forum for Ms. Harris, a former prosecutor and California attorney general, to play the role of attack dog for Democratic presidential nominee Joseph R. Biden and to stoke outrage among the party base over what critics call a slapdash confirmation process just weeks ahead of the Nov. 3 election.

“As the vice-presidential candidate, Sen. Harris will be able to use the hearings to make the case that the nomination is an overt abuse of power,” said Richard Anderson, a political science professor at the University of California, Los Angeles.

The Trump campaign isn’t sweating it, though, predicting her antics will reveal her to be a pure partisan.

“With Justice Kavanaugh, Harris showed the American people she clearly has a problem with pro-life principles and religious freedom, and we’re sure she’ll abuse her position to baselessly attack whoever the president nominates,” said Samantha Zager, deputy national press secretary for the Trump campaign.

Her famous exchange with Justice Kavanaugh in early September of 2018 lasted for several uncomfortable minutes as she insinuated, while never exactly saying, that she had inside knowledge about his discussions.

“Have you discussed Mueller or his investigation with anyone at Kasowitz, Benson & Torres — the law firm founded by Marc Kasowitz, President Trump’s personal lawyer? Be sure about your answer, sir,” Ms. Harris warned the nominee.

The line of questioning suggested a conflict of interest for Justice Kavanaugh, as special counsel Robert Mueller’s Russia probe was in process at the time and the findings could have led to a Supreme Court case.

It looked like she had him on the ropes. He would either admit a conflict of interest or fall into a perjury trap set by Ms. Harris.

The high drama ultimately fell flat, however, with a quizzical Mr. Kavanaugh denying any knowledge of what she was talking about. Within a day, Democrats abandoned the issue.

Her aggressive style could play out differently this time now that Mr. Trump has pledged to put forth a female nominee.

“Women will react more negatively to her badgering a female nominee than her badgering Kavanaugh,” said Curt Levey, president of the conservative Committee for Justice.

The president has a shortlist of five women for the seat and plans to announce his pick Saturday from the White House. The candidates to fill the seat left by the late Justice Ruth Bader Ginsburg are:

Mr. Levey thinks it’s wise for Democrats to make Ms. Harris the face of the Supreme Court showdown instead of Mr. Biden, who chaired the Senate Judiciary Committee during the heated confirmation hearings of Judges Robert Bork and Clarence Thomas.

Mr. Biden, who was chairman of the committee for the separate hearings, led the charge in accusing Judge Bork of rolling back civil rights for women and Blacks. He stood by as the late Sen. Edward M. Kennedy said the judge would force women to have back ally abortions.

Justice Thomas’s hearing mirrored the chaos of Justice Kavanaugh’s when he was accused of sexual misconduct. The hearings marked some of the most divisive, partisan moments in American legal and political history.

Mr. Biden suffered criticism both for allowing the hearing to become a “high-tech lynching,” as Justice Thomas put it, and for failing to protect Anita Hill from a Republican grilling when she accused the nominee of sexual misconduct.

“He, more than anyone, is responsible for the mess we have today,” Mr. Levey said of Mr. Biden.

Amy Koch, a political strategist who was the first woman to serve as Senate majority leader in Minnesota, said highlighting Mr. Harris’s sparring with Justice Kavanaugh would be “valuable” to the Biden campaign, acknowledging that revisiting those videos could also help with fundraising and energize their supporters.

“Clearly the attorney in her really came out and I think that sort of strong law-and-order part of her was really demonstrated,” Ms. Koch said. “It’s really important how they are going to define their message on this. I think it has been a little sporadic at this point.”

Senate Majority Leader Mitch McConnell, Kentucky Republican, has the votes to quickly advance the president’s pick, and he’s warned that Democrats are bound to oppose the nominee as they have for decades — using what the Kentucky Republican called the same recycled excuses.

“The far-left playbook stays exactly the same,” he said. “No matter their record, every nominee gets the same insane treatment so long as the president who nominated them is not a Democrat.”

Democrats want the process to stop and wait until after the results of the Nov. 3 election, when Mr. Biden could be making the nomination.