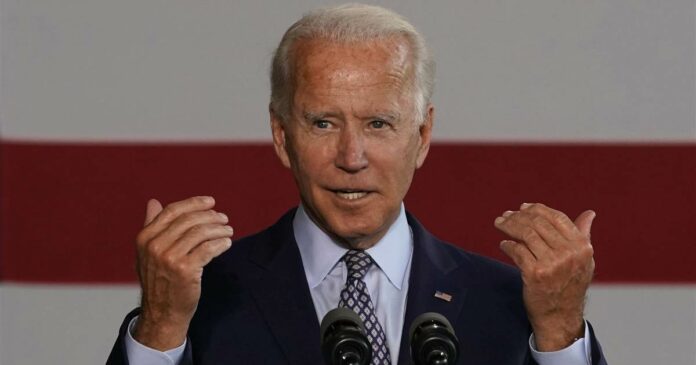 WASHINGTON — Weeks after launching his presidential campaign, Joe Biden predicted that once President Donald Trump was defeated, Republican lawmakers would have an “epiphany” and be more willing to cooperate with Democrats to solve the country’s problems.

His progressive critics weren’t sure whether to laugh or cry. Left-leaning activists and some 2020 rivals lambasted the former vice president as hopelessly naive — had he met Senate Majority Leader Mitch McConnell? Did he nap through the Obama administration?

Biden didn’t relent. And most voters didn’t seem to mind.

“With Donald Trump out of the way, you’re going to see a number of my Republican colleagues have an epiphany. Mark my words. Mark my words,” he said at a Nov. 6 fundraiser hosted by the Washington law firm Sidley Austin.

Then his message subtly shifted.

Biden stopped using the word “epiphany.” His predictions of future GOP behavior morphed into optimism and hope that they’d feel freer to cooperate in a post-Trump world.

At a recent NAACP town hall, Biden said that “with Trump gone, his ability to retaliate against Republicans is diminished.” He said that “maybe” GOP colleagues “will find the courage to do what I know many of them think they should do, but that remains to be seen.”

Biden never rescinded his vows to invite Republicans to the table, but he had refined his message. He won the Democratic primary and now enjoys a substantial lead in polls against Trump as voters find solace in his pleas to heal a country plagued by a pandemic, recession and racial tribalism.

Asked about Biden’s earlier predictions of a Republican epiphany, Sen. Chris Coons, D-Del., a close ally who holds Biden’s old Senate seat, interrupted with a pithy retort: “Have you heard him say that in the last six months?”

The shift in signaling from Biden points to a daunting challenge he will face if elected president: Can he deliver? A partisan gulf that began decades ago has widened and deepened under Trump, making it likely that Biden’s agenda to rebuild the country would run into the same kind of Republican opposition that Barack Obama faced as president.

“Nobody knows better than Joe Biden just how much Mitch McConnell’s obstruction cost than the vice president who was charged with going to the Senate and trying to get bipartisan support for the Affordable Care Act, for the Recovery Act, for critical nominations,” Coons told NBC News in an interview. “Joe is perfectly clear-eyed about the moment we’re going to face in January if he’s elected.”

Some liberal activists say Biden is repeating the mistakes that Obama made by misunderstanding the nature of the opposition.

“At the heart of my concern about VP Biden has been that he continues to want to deal with Republicans like he’s in the Senate in 1982,” said Neil Sroka, a spokesman for Democracy For America, a progressive activist group that supported Bernie Sanders for president. “He still has this very flawed corporate Dem understanding of the path towards compromise.”

A centerpiece of Biden’s agenda — rolling back most of the Trump tax cuts to boost investments in health care, infrastructure and green energy — is a nonstarter with most Republicans.

“It’s going to be very hard to make the argument — to anyone really, but certainly to Republicans — that coming out of the economic crisis the answer is to raise taxes and make it harder to create jobs,” said Michael Steel, a GOP consultant who was a spokesman for then-House Speaker John Boehner, R-Ohio. “And there will be a return to concerns about deficits and debt next year, regardless of what happens in the election.”

“The sort of moderate Republicans that the former vice president has worked with in the past are increasingly rare on Capitol Hill,” Steel said. “And to the extent that they’re there, they’re the ones most at risk in the 2020 election.”

As Democrats’ prospects of sweeping the White House and Congress brighten, the tension foreshadows a showdown over the filibuster. Democrats have a viable path to 50 votes in the Senate but not to 60. Coons, an institutionalist who has defended the super-majority threshold, opened the door to abolishing it if it stands in the way of advancing an agenda that powers Biden to victory.

“I hope that they will give up their obstructionism, but I do not expect it,” Coons said. “I will not sit by for four years and allow Republican obstructionism to prevent us from making progress on racial justice, a recovery that builds our economy back stronger and addressing this pandemic.”

Coons said he “will work very hard” to find senators to responsibly solve problems. “If that includes no Republican then we’re going to have to make changes to move forward,” he said.

A campaign spokesperson said Biden opposes abolishing the filibuster. The aide declined to comment on Biden’s earlier remarks about predicting a Republican epiphany and whether the candidate’s thinking has evolved.

Politically, Biden’s pitch appears to be working as he presses a message of healing and unity in television ads, social media posts and speeches. Surveys show Americans souring on Trump’s inflammatory style and questioning his competency.

A Pew Research Center poll released in late June found that Biden holds a 14-point lead over Trump on the question of who can “bring the country closer together.” Overall, the poll found him leading Trump by 10 points.

This week, Biden sought to dispel criticism that he is starry-eyed about the path forward.

“I have no illusion how tough the road ahead is going to be for our country. But I’m an optimist. I know the history and the heart of this country,” he said Thursday at a speech in Dunmore, Pennsylvania. “The only entity, the only thing that can tear America apart is America itself.”