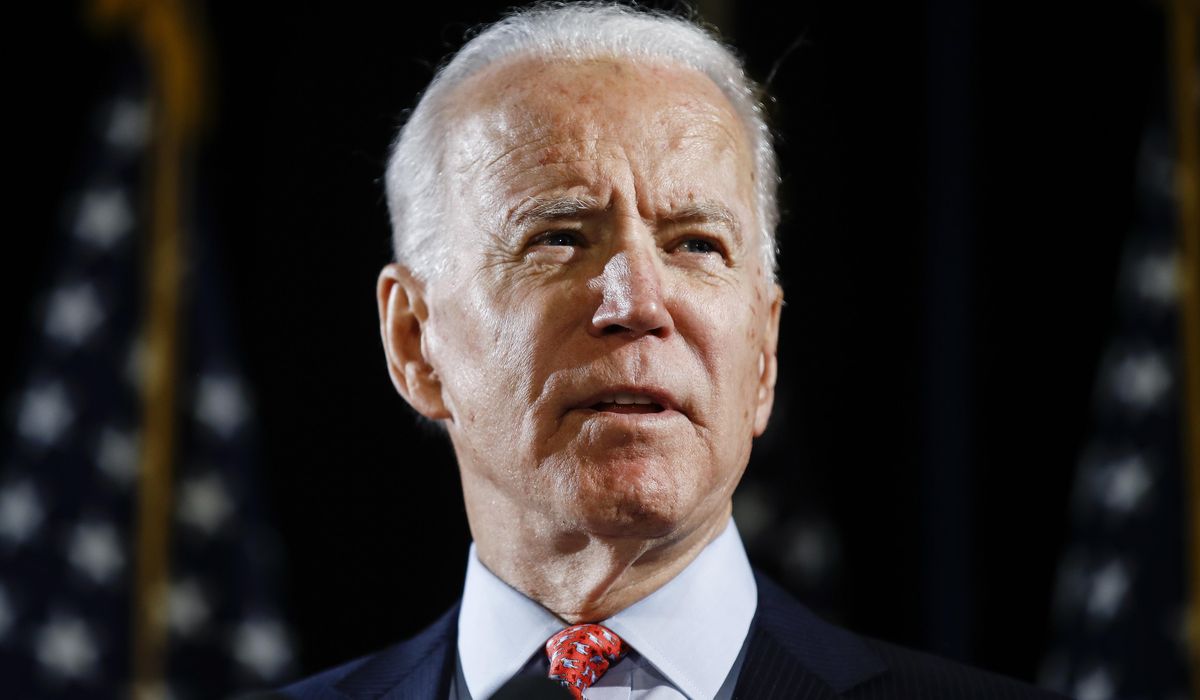 Joseph R. Biden’s search for a running mate spawned an online debate this week over whether the presumptive Democratic presidential nominee is better off tapping Sen. Elizabeth Warren or Sen. Kamala D. Harris — or someone else.

The pro-Harris wing of the Twittersphere argues the California Democrat is younger, has prosecutorial chops and that choosing Ms. Warren would likely cost the party a Senate seat.

The gung-ho Warren crowd counters that she’s the brainiest option on the board, could galvanize far-left voters, and comes with a bonus — her burrito-loving dog, Bailey.

Mr. Biden’s hunt for a vice president, a position he held for eight years in the Obama administration, is underway.

The 77-year-old has vowed to pick a woman but has been coy about whether a favorite has emerged.

Meanwhile, cooped up party insiders, talking heads and keyboard warriors have been left to handicap who could help smooth out Mr. Biden’s rough edges and strengthen the ticket headed into the general election.

Jennifer Lawless, a political science professor at the University of Virginia, said that studies have in general shown the choice of a running mate does not make or break a campaign, but they can do something Biden needs: generate a fresh dose of enthusiasm for a White House hopeful.

“I think first he needs to energize a base that is very excited about defeating Donald Trump but not necessarily that excited about him,” Ms. Lawless said. “So the extent that he can do something that speaks to the more diverse, younger demographics of the party the better off he is.”

President Trump faced different questions about his bid in 2016 and his choice of Mike Pence has been heralded as one of the smartest moves he has made as a politician.

Mr. Pence, a former governor and former member of Congress, added the missing element of governing experience to the billionaire businessman’s unconventional campaign. Since the election, the steady vice president has become known as a calming force at The White House.

Pete D’Alessandro, who served as an adviser to Sen. Bernard Sanders’ presidential campaign, said Mr. Biden has the chance to send a powerful message to voters with his choice.

“For the symbolism it is important,” Mr. D’Alessandro said. “When you pick a woman you are saying this is a major part of our constituencies we want to talk to.”

“It is the same thing when you pick a progressive,” he said. “You are telling those voters you are important.”

Mr. Biden whittled down the list of possible contenders when he pledged in a debate last month to tap a woman as his running mate, marking a historic rhetorical turn away from the question of whether a woman would be picked as vice president to who she would be.

Several of the contenders say they would welcome the chance to serve alongside Mr. Biden, including Ms. Warren and Stacey Abrams, a former Georgia gubernatorial candidate and prominent voting rights activist.

Asked if she would accept the offer if Mr. Biden made it, Ms. Harris, who recently joined Mr. Biden on a virtual fundraising event, said she would “obviously be honored to serve with Joe.

“But I’m just telling you that my focus right now is really on what we are dealing with right now,” she said Thursday on MSNBC. “I have been focused 100% on this pandemic.”

The shortlist also is thought to include a trio of Midwesterners — Sens. Amy Klobuchar of Minnesota and Tammy Baldwin of Wisconsin and Michigan Gov. Gretchen Whitmer.

Others have suggested Mr. Biden could do the unexpected by selecting former first lady Michelle Obama or draft New York Gov. Andrew Cuomo (a move that would require him to break his earlier promise about picking a woman).

Centrist Democrats and even some Republicans say Mr. Biden would be best served tapping someone such as Ms. Harris or Ms. Klobuchar because they could appeal more moderate voters who are turned off by Mr. Trump. That crowd is less inclined to embrace the likes of Ms. Warren or Ms. Abrams.

Ms. Warren and Ms. Abrams, however, could be more appealing to those looking for ideological warriors.

“I would be an excellent running mate,” Ms. Abrams told Elle Magazine in an interview published this week. “I have the capacity to attract voters by motivating typically ignored communities.”

“I am ready to help advance an agenda of restoring America’s place in the world,” she said. “If I am selected, I am prepared and excited to serve.”

Rep. Alexandria Ocasio-Cortez, who has emerged as the face of the Democratic Party’s progressive wing, said this week that just picking a woman is not enough.

“While I am encouraged that Biden has said he wants a woman of color to be his vice president, for me what is really important is not only just that woman’s identity in terms of gender and cultural terms, but I think what is very important is who that woman is in her stances,” Ms. Ocasio-Cortez said in a Politico playbook “virtual interview.”

“I think it would be encouraging if Biden picked someone who is also a little bit more progressive than he knows may push him,” Ms. Ocasio-Cortez said.

Mr. D’Alessandro said Mr. Biden would break with recent precedent if he moved in that direction. He pointed out that Mrs. Clinton selected Sen. Tim Kaine of Virginia and Mr. Obama went with the more moderate Biden.

“You really have to go back to Jimmy Carter to find a moderate nominee who was willing to move to the left with his vice presidential pick,” Mr. D’Alessandro said.

“I think one of the nice symbols would be for Joe Biden to name somebody that is clearly to his left as his running mate,” he said. “Again it is a symbol. It doesn’t mean he is going to govern from the left, but it means that he understands there are people who want to be represented on the ticket.”