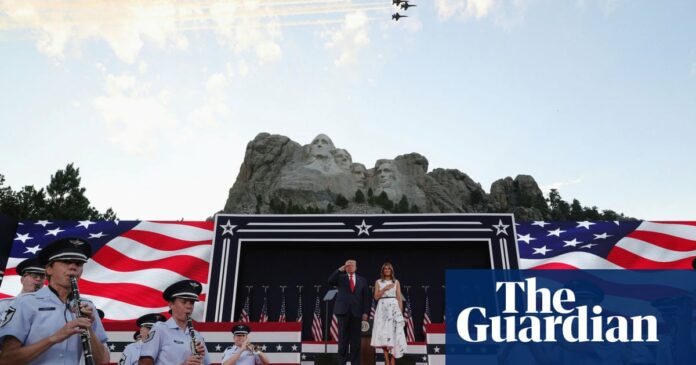 Two miles from the White House is a small gun. The .44-calibre derringer pistol is displayed in a museum beneath Ford’s Theatre in Washington. It was fired by John Wilkes Booth, a white supremacist and sympathiser of the slave-owning Confederacy, when he assassinated Abraham Lincoln five days after the end of the American civil war.

Booth could never have guessed that, a century and a half later, the lost cause would find a new flag-bearer in the White House – nor that it would be in the form of Donald Trump, a New York businessman obsessed with being on the winning side.

As a surge of protests against racial injustice in recent weeks toppled Confederate statues and demanded the renaming of military bases, the US president dug in for the status quo. And on Monday he went further by explicitly criticising Nascar, the National Association for Stock Car Auto Racing, for banning the stars and bars flag of the slave-owning Confederacy.

On one level, it may seem bizarre. On another, it makes perfect sense ahead of November’s election against Joe Biden. The president, who counts Gone With the Wind among his favourite films, is repurposing the civil war as a culture war against an enemy within.

“There’s a reason why he says what he says the way he says it, because it still has resonance,” Michael Steele, a former Republican National Committee chairman, told the MSNBC network on Monday. “It still has appeal to a significant number of white Americans in cities, in suburbs, in rural parts of our country. So this is going to require a lot more effort to pull out that vote that Joe Biden is going to need versus what a Trump is going to need.”

On the eve of independence day, Trump staged a jamboree at Mount Rushmore, which depicts images of presidents George Washington and Thomas Jefferson, both of whom owned slaves, as well as Lincoln and Theodore Roosevelt. He railed against “far-left fascism” that he claimed wants to desecrate such monuments, earning cheers from an overwhelmingly white crowd in the Black Hills of South Dakota

Steele added: “I’m sceptical that this is going to be a big win for Joe, or a cakewalk in any way, because the president knows what he’s doing. He does what he does and says when he says the way he does it for a reason, because he knows at his core there’s appeal.

“Look at the folks who showed up at Mount Rushmore, putting their own health in jeopardy. There is a resonance and that resonance goes to places beyond just the Trump vote.”

Trump spent decades stoking culture wars and racial divisions but has now dispensed with the dog whistle in favour of a brass band against what he calls “the radical left, the Marxists, the anarchists, the agitators, the looters, and people who, in many instances, have absolutely no clue what they are doing”.

In the Nascar tweet, he claimed that Bubba Wallace, the sport’s only top-level African American driver, should apologise after a “hoax” noose was found in his garage (it was Nascar, not Wallace, that reported the noose). Later on Monday, Trump took a Twitter swipe at the Washington Redskins football team and Cleveland Indians baseball teams for being “politically correct” – and by extension weak – by considering name changes.

To some, these appear to be desperate measures. After presiding over more than 130,000 deaths from the coronavirus and tens of millions of job losses, the president trails Biden by double digits and needs distractions.

But ahead of the midterm elections in 2018 he sought to whip up fears of “caravans” of illegal immigrants, only for Republicans to be crushed in the House of Representatives. So history and logic suggest that going after a shrinking base ever more zealously is a one-way ticket to landslide defeat in a diversifying nation where surveys show broad support for Black Lives Matter protests.

John Zogby, a pollster and author, said: “I believe it is a deliberate election strategy, albeit a very strange one. I do recall feeling that the things that he said coming down the escalator five years ago in New York were also very strange, although he had the good fortune to run against someone [Hillary Clinton] equally disliked and distrusted back then.

“He’s clearly carving out for himself a very narrow position, one could say the base of his base, and the only way that it really could work in electoral politics is for a complete and total Biden collapse. The other part of Trump’s strategy, of course, is to enable that collapse – Sleepy Joe, Corrupt Joe – and then a hope that Biden steps in it somehow and makes an egregious error. But by any standard, this is very strange as a strategy.”

It is a huge gamble that keeps Republicans up at night, but Trump may simply be following his own instincts: even detractors were forced to admit that a certain intelligence and genius for publicity got the better of both party establishments in 2016.

Trump’s thinking, as ever, is also shaped by the conservative Fox News. “If you want to understand the rhetorical roots of Trump’s Independence Day speech at Mount Rushmore, go back and watch Tucker Carlson’s monologues for the past six weeks,” wrote the Axios website, laying out example after example of how Trump’s remarks echoed those of the popular host.

Antjuan Seawright, a Democratic strategist from the same state, said: “I think it is without any doubt in my mind a laser-focused strategy by Trump and his political affiliates to do this, and he will find some success with a certain segment of voters in this country, because those are the same people who supported him in 2016 and some of that support continues to follow him.

“So he indeed tickles the ear and flutters the heart of some with that type of rhetoric and that type of messaging. However, I do believe in my heart that there are people who have come to the reality that this is not who we are as Americans and this country cannot go forward in the direction of progress with the leader of the free world behaving like that.”