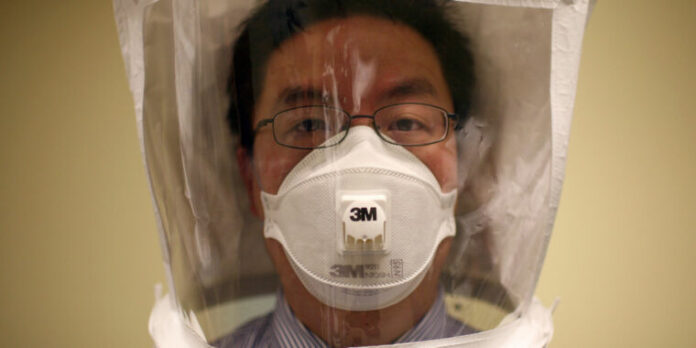 A debate has erupted among researchers over the potential for the pandemic coronavirus, SARS-CoV-2, to spread through the air and—if it does so often enough—what to do about it.

Though talk of airborne transmission has been simmering since the beginning of the pandemic, it reached a boiling point this week following a letter penned by two researchers and addressed to “national and international bodies.” The letter, eventually signed by 239 researchers, urged those bodies to acknowledge the potential for airborne spread and to recommend control measures aimed at preventing it.

“Most public health organizations, including the World Health Organization, do not recognize airborne transmission except for aerosol-generating procedures [AGPs] performed in healthcare settings,” the letter stated. The evidence on airborne transmission is “admittedly incomplete,” the letter went on, but “[f]ollowing the precautionary principle, we must address every potentially important pathway to slow the spread of COVID-19.”

The letter was published Monday as a commentary piece titled “It is Time to Address Airborne Transmission of COVID-19” in the journal Clinical Infectious Diseases. But by then, it had already created a dustup, making headlines in The New York Times, The Washington Post, the Los Angeles Times, and others.

Most of the media coverage has homed in on the conflict with the WHO, casting the researchers’ letter as yet another ding against the organization’s pandemic response. In the past months, many researchers and public health experts have criticized the WHO, saying it stumbled in the wake of fast-paced research relating to mask use and garbled messaging on the risks of virus transmission from people who show no symptoms of COVID-19, among other things. The WHO’s stance on aerosols is yet another example of the organization being overly cautious at interpreting data and sluggish at recommending life-saving precautions, critics say.

Meanwhile, researchers have erupted in debate of their own regarding airborne transmission. There are disputes over the data—and what it means—as well as definitions of airborne droplets and how the current data should translate to precautions and protective measures.

At the crux of the debate is how, exactly, different research groups classify the throng of teeny globs that spew from our mouths and noses as we breathe, talk, sing, laugh, shout, sneeze, and cough.

At one end of the spectrum, there are relatively large droplets, launched often from coughs and sneezes, that have the trajectory of ballistic missiles. These tiny droplets of respiratory secretions can be loaded with infectious virus, cozy in their moist bubbles. But as they are relatively heavy, these droplets tend to fall rapidly to the ground and often don’t make it farther than a meter or two from their launch site.

On the other end of the spectrum, there are aerosols. These are often defined as being less than 5 micrometers in diameter (a micrometer is one-millionth of a meter. For reference, the width of a human hair can range from around 20 micrometers to nearly 200 micrometers.) Aerosols—which are sometimes called droplet nuclei—are lighter than respiratory droplets and can hang in the air, potentially for hours. They can also travel much farther from their launch site, easily traversing and swirling around a large room.

But unlike the plump ballistic droplets, aerosols don’t provide such a cushy environment for viruses. In aerosols, viral particles are more exposed to the elements and may have shorter survival times depending on temperature and humidity levels of a room. And because aerosols are much smaller, they pack in fewer viral particles. A person may have to suck in a high number of aerosol particles to get sufficient dose of virus to trigger an infection.

When relating this to the spread of germs and disease, many epidemiologists try to keep things simple and categorize transmission as being either largely from the ballistic respiratory droplet route or the aerosol route. The mumps virus is in the respiratory droplet category, for instance, which is spread from contact with saliva or close-range sneezes and coughs. The measles virus, which can linger in the air for hours and infect someone well after a sick person has left the room, spreads by aerosols.

These uncomplicated disease transmission bins have been useful and sufficient—up until now, it seems.

We produce a jet stream of respiratory particles—of varying intensities, with droplets of an entire range of sizes, from big, middling, to small—all the time. We do it while breathing, talking, singing, chanting, yelling, laughing, sneezing, coughing, whistling, etc.

That said, there is a growing pile of information on people who have been infected and how their infections likely happened. The bulk of it points to close contact—being within two meters of an infected person where they could be exposed to respiratory droplets of any size, whether they’re plump ballistic ones or aerosolized. There is little data so far suggesting people get infected at long distances or that people are infected from being in rooms long after COVID-19 patients have passed through, like measles. This knocks back the idea of classical aerosol spread. Clinical data, meanwhile, has clearly found SARS-CoV-2 lurking in people’s throats and noses.

Though epidemiologists—including those at the WHO—understand that reality is far more complex, they’ve stuck to the straightforward droplet approach, given data that suggests the bulk of infections align with the short-range droplet category. But other researchers, many of whom are engineers and environmental health experts, are now pushing back, noting that SARS-CoV-2 may be aerosolized.

In a study published in March in the New England Journal of Medicine, researchers at the US National Institutes of Health found that when they put SARS-CoV-2 into a three-jet Collison nebulizer, they could create SARS-CoV-2 aerosols that held viable virus aloft for up to three hours.

Further, some researchers argue that aerosols best explain some so-called “super-spreading events” when many people become infected at once. In the letter to health bodies—written by Lidia Morawska, an air quality engineer at Queensland University of Technology, and Donald Milton, an environmental health researcher at the University of Maryland—the authors note a study of a super-spreading event in a Chinese restaurant. The study found that SARS-CoV-2 spread from one infected person to people at their table plus unrelated people at two nearby tables that happened to be in the stream of an air conditioning unit. The authors of the study concluded that “aerosol transmission of SARS-CoV-2 due to poor ventilation may explain the community spread of COVID-19.”

But epidemiologists and infectious disease experts have pushed back on this line of thinking.

In a press conference Tuesday, WHO chief scientist Soumya Swaminathan noted that data like the NIH’s nebulizer experiment is not necessarily useful for understanding what happens in real life. She explained:

So you have bioengineers and experts in physics who do experiments in laboratories and come out with that kind of data. Now, whether that exactly reflects what happens in day-to-day settings and clinical settings, we cannot extrapolate. Right? So, then you have to take ecological, descriptive data—sometimes from outbreaks that happen in different settings—which may point in a certain direction. But then you cannot always rule out [other possibilities]. For example, it may point to the fact that there could have been limited airborne transmission, but it could also be through fomites [contaminated objects] or other means.

Swaminathan added that the WHO is continually reviewing the data—reading 500 and up to 1,000 COVID-19 studies each day. The WHO technical lead on COVID-19, Maria Van Kerkhove, said that the WHO is working on a scientific brief about transmission, potentially updating the group’s thinking on aerosols. The organization has been working with researchers for weeks now and plans to release the document in the coming days.

Other experts have been more sharply critical of the aerosol argument. In a statement, infectious disease expert Babak Javid of Tsinghua University School of Medicine, Beijing, went further in knocking back the hypothesis of airborne spread in the Chinese restaurant. As he wrote (emphasis his):

In this opinion piece, the authors cite one well-documented transmission cluster in a restaurant in China as evidence for airborne transmission. The source patient was at one table, and diners at several other tables were infected: all of them downstream of an air-conditioner that was positioned in the room. There was no physical contact between the parties. This certainly supports transmission via the air conditioner airflow, be they small or large droplets. However, it should be noted that diners on adjacent tables to the source patient, but who were not in the direction of airflow were not infected. This argues strongly against airborne particles that can distribute throughout a room over a period of time being a source of infection. Furthermore, we know from numerous studies of clearly documented transmission events that physical distance is protective, even indoors. For example, in the well described cluster of the first European outbreak in Munich, one diner transmitted to another, and their only contact was a brief conversation to pass the salt. No other diners in the room were infected. Studying transmission among Beijing households (i.e. necessarily indoors, and for prolonged periods), physical distance of >1m from the source patient was the most consistent and protective factor.

Moreover, air sampling in hospitals has been inconsistent in detecting virus—sometimes turning up with genetic material from SARS-CoV-2 and sometimes not. Even so, experts at WHO and elsewhere note that genetic material alone in air samples does not necessarily mean that there are whole, infectious viruses floating around.