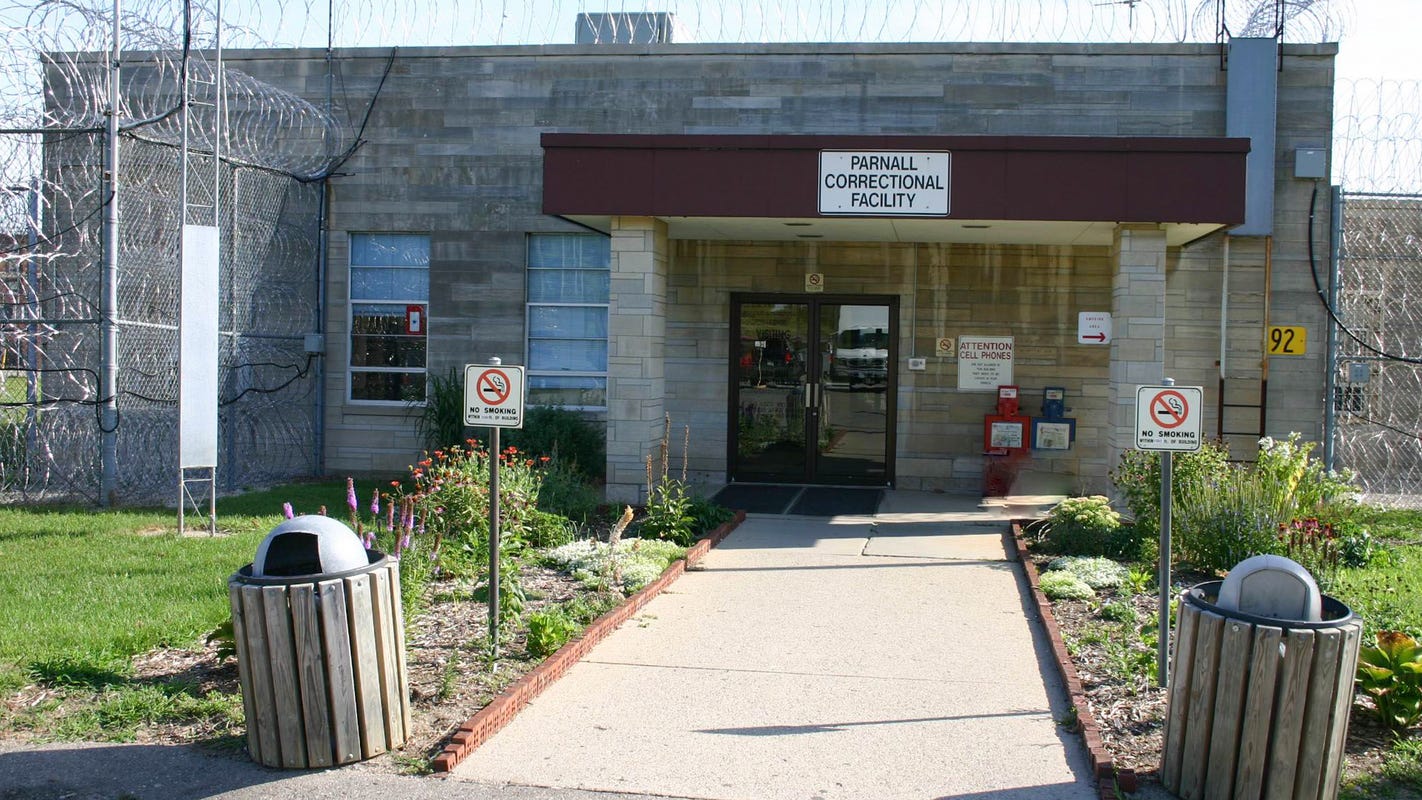 A Michigan prison that’s emerged as a hotspot for coronavirus cases has a rate of infection that exceeds jail systems in New York City and Chicago, both of which have garnered national attention as large sources of the outbreak.

At Parnall Correctional Facility near Jackson, 10% of prisoners and 21% of staff have tested positive for COVID-19, according to a Detroit Free Press analysis of Department of Corrections data.

The percentage of the incarcerated population sickened by the novel coronavirus at Parnall has surpassed the 7% infection rate at the Cook County jail in Chicago, which The New York Times described last week as the largest known source of infections in the United States.

Parnall’s rate is also higher than that of Rikers Island and other New York City jails, which have a collective infection rate of 8%, according to the Legal Aid Society. Like Chicago, New York City’s jail system has a higher COVID-19 case count and a population more than twice as large as Parnall.

Among prison systems that are actively reporting infections, the Stateville Correctional Center in Illinois has a higher infection rate than Parnall at 11%.

The infection rate and high proportion of positive tests at Parnall signals that the confirmed cases are only the “very tip of the iceberg,” said Dr. Josiah Rich, professor of medicine and epidemiology at Brown University and director of the Center for Prisoner Health and Human Rights at The Miriam Hospital in Rhode Island.

More: Why coronavirus is running rampant in Michigan prisons

At the start of the outbreak at Parnall, the minimum-security prison about 75 miles west of Detroit housed 1,641 prisoners. Positive tests of four prisoners housed in single cells in a unit known as 10 Block marked the arrival of the coronavirus at the facility on March 25. Now 162 prisoners from every housing unit are confirmed to have the virus, including four men who have died, according to Department of Corrections spokesman Chris Gautz. Of the 63 Parnall staff confirmed to have COVID-19, more than half are officers.

The rate of infection among residents in surrounding Jackson County is 0.1%.

Since a man from an Upper Peninsula facility was confirmed as MDOC’s first prisoner case of COVID-19, the department has tested 707 inmates. Results have come back positive for 454 prisoners as of Tuesday.

Rich said there could be “thousands” of undetected cases across Michigan’s prison system.

About half of the state’s 29 prisons have at least one confirmed case of a prisoner with COVID-19, with an overall infection rate of 1.2% among roughly 38,000 prisoners. Ten percent of 454 prisoners who’ve contracted COVID-19 have been sent to community hospitals. Eleven prisoners have died as of Tuesday evening.

Staff cases have climbed to 175, or 1.4% of employees as of Tuesday evening. Two MDOC employees have died.

Nearly 2.3 million people are incarcerated in prisons, jails, juvenile detention centers and other facilities across the country, with more than half locked up in state prisons, according to the Prison Policy Initiative, a criminal justice think tank.

Anticipating the arrival of the coronavirus, advocates and health experts across the country began sounding the alarm a few months ago. They say that jails and prisons are like “petri dishes” in which COVID-19 could run rampant among an aging population that’s particularly vulnerable to disease.

“It’s the duty of every state to recognize that a prison sentence shouldn’t become a death sentence just because of a pandemic,” said Wanda Bertram, spokesperson for Prison Policy Initiative.

In Michigan, prisoners, their families and corrections officers have told the Free Press in recent weeks that they fear how quickly COVID-19 is spreading behind bars.

“I have panic attacks,” said Juanita Reynolds, 45, of Tuscola County, who worries about the possibility of her husband contracting the coronavirus before he’s paroled from Parnall in August. “I have anxiety issues. It makes it worse.”

Both Gautz and Byron Osborn, president of the Michigan Corrections Organization union, pointed to the setup of Parnall’s housing as one factor that likely allowed the virus to spread quickly. Three pole barn buildings hold more than half the facility’s prisoners in open bay settings: eight-man cubes with partial walls and no doors. The rest of the population is housed in single-man cells with open bars.

“We’ve known since the beginning of this crisis that once it penetrates a facility that has an open bay setting, it’s going to be really difficult to contain,” Osborn said. “It had probably spread much more quickly in there before the department had been able to get a handle on it.”

Reynolds said she tracks the department’s daily updates on prisoner and staff infections posted online. The growing case count keeps her on edge, she said.

“We’ve yet to have a day where there’s been more negative tests than positive,” Gautz said of the last several weeks. “Hopefully we’ll start to see it come back down, but we don’t want that to be because we’re not doing enough testing.”

Just by being incarcerated, Gautz said, all prisoners technically meet the criteria for testing if they show one symptom of COVID-19. The department has about 750 test kits on hand for prisoners, he said.

Staff who show symptoms, meanwhile, need to seek testing in the community. That’s been a challenge, though Osborn said the department recently secured slots for some officers to get rapid testing in Detroit.

The Detroit Free Press is on guard with breaking news, tips and analysis to help you through this crisis. But we need your help. Please subscribe to support Free Press journalists who are reporting on the coronavirus. Or you can make a tax-deductible contribution to the non-profit Report for America to help us put new reporters on the ground in metro Detroit.

With large numbers of officers and other employees who come and go across multiple shifts each day, the boundaries between prisons and the communities in which they’re located are porous. Experts say the notion that correctional institutions are separate from communities is a fallacy.

Osborn said the department’s four facilities in Jackson and two to the south — Lakeland Correctional Facility in Coldwater and Gus Harrison Correctional Facility in Adrian — employ more than 1,300 officers, plus more civilian support staff. Many of those employees travel from communities across the southern swath of the state, like metro Detroit, Lansing and Kalamazoo.

While Parnall has the highest infection rate among prisoners, prisons in the southeast and south central parts of the state have also been hit hard:

To combat the pandemic, “we need to consider prisons and jails as reservoirs that could lead to epidemic resurgence if the epidemic is not adequately addressed in these facilities everywhere,” Rich at Brown University and two other infectious disease specialists wrote in an essay published this month in the New England Journal of Medicine.

Among other steps, the article recommends the release of prisoners who aren’t likely to offend again, as well as the elderly and ill — measures that advocates have been calling for in Michigan.

Gautz has said the department is working to speed up paroles. Under the “truth in sentencing” law, the department cannot consider prisoners for release before they’ve served their entire minimum sentence.

Governors in states including New Jersey, Washington and Pennsylvania have stepped in and signed executive orders to begin releasing or granting medical furloughs to vulnerable inmates to help stem the spread of COVID-19. Gov. Gretchen Whitmer so far has not ordered the early release of prisoners in Michigan.

The ACLU of Michigan said Whitmer could swiftly lower the prison population during the public health emergency with steps such as temporarily reinstituting the use of good-time and disciplinary credits to advance parole eligibility, waiving technical requirements for parole such as completing classes in prison, and expanding the use of commutations and medical parole for elderly or frail prisoners.

“Lives can be saved, but only if we act now to protect people who are most vulnerable to serious illness and death from COVID-19,” ACLU of Michigan Legal Director Dan Korobkin said in a statement.

Efforts in other states have centered around releasing prisoners with nonviolent convictions. That would exclude people like DeAngelo Thomas, who has been in prison for 16 years for assault with intent to commit murder and says he was wrongly convicted in Wayne County. His earliest release date is three years away.

“Why not release a guy who’s been down as long as I’ve been down?” said Thomas, 42, of Detroit, who said he’s eager to return home to his wife and three daughters. “We’re not coming back to prison, especially when you’re leaving with a plan.”

Thomas knew three of the prisoners at Parnall who’ve died of COVID-19.

“I wake up and praise God every morning I wake up without a fever,” he said.

A component largely overlooked as prisons and jails grapple with how to slow the spread of COVID-19 is proper training on PPE, said Dr. Homer Venters, former chief medical officer of the New York City jail system.

He offered the example of a corrections officer who is handed a mask, and within a day or so, they’re seen wearing it around their neck because no one instructed them how and when to use it. Or, an inmate who cleans the facility is asked to clean the cell of a symptomatic prisoner with no advice on personal precautions.

“The frontline staff for infection control are the officers and detained people. But most of the plans I’ve seen around the country fail to really appreciate that,” said Venters, president of the nonprofit Community Oriented Correctional Health Services. “Now you have lots and lots of very scared people who are detained and very scared correctional officers because nobody’s taking the time to really engage with them as part of that infection control team.”