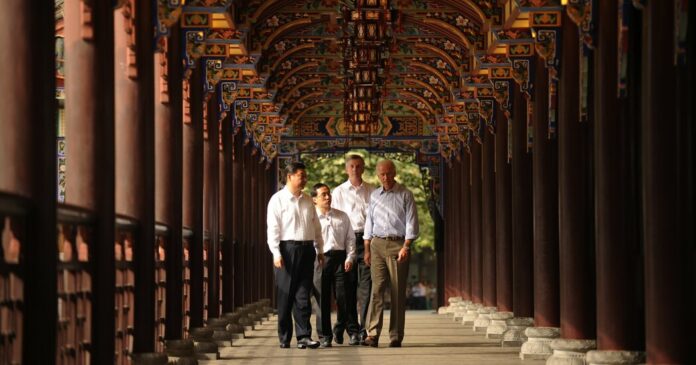 President Trump has brought China’s relations with the United States to their lowest point in years. Joseph R. Biden Jr. could prove, from the Chinese vantage point, to be a tougher and more complex challenge.

Mr. Biden, according to analysts in China, could do more damage than Mr. Trump by pursuing a more coherent strategy to counter China’s global agenda.

Mr. Biden has vowed that if elected, he would take a harder line on climate change and China’s crackdowns on ethnic minorities and Hong Kong. To China’s leadership, he is the candidate more likely to restore strong ties with American allies and mobilize other nations to pressure China more effectively.

“Biden would make the hard lines more effective and more efficient,” said Cheng Xiaohe, an associate professor of international relations at Renmin University in Beijing. “He might resort to more sophisticated and coordinated tactics against China.”

Mr. Trump, who has once again made China a pillar of his campaign, repeatedly claims that he is the tougher of the two candidates where Beijing is concerned. He has launched a costly trade war against China, taken aim at its rising technology industry and repeatedly blamed it for the spread of the coronavirus.

He has also alienated leaders in Europe and Asia and showed a willingness to overrule his own purported security concerns to strike deals that help American companies, as he appears to have done to allow TikTok to continue to operate in the United States.

In China’s hawkish quarters, in fact, there are some who believe that Mr. Trump’s “America First” presidency has, on the whole, benefited China by reducing American global leadership. A popular meme that has circulated for months mocks him as “Build-the-Country Trump,” a pun on a revolutionary name that suggests Mr. Trump has done more to make China — and not the United States — great again.

In public, Chinese officials have not taken sides or commented on the two candidates’ prospects. Cui Tiankai, the Chinese ambassador to the United States, and other officials have also rejected claims that Beijing is seeking to influence or otherwise interfere in the presidential election.

Many of those same officials have come around to the idea that China will very likely face a harsher political environment in the United States, regardless of who wins. The leadership in Beijing now understands that both Democrats and Republicans want to do more to constrain China, analysts said, creating a challenge to the ambitions of China’s leader, Xi Jinping, to expand the country’s economic and geopolitical might.

Mr. Biden is no stranger to China’s leaders, including Xi Jinping. As a senator, he played an important role in China’s accession in 2001 to the World Trade Organization — a point Mr. Trump has repeatedly used to attack Mr. Biden.

The Chinese leadership views Mr. Biden largely through its experience of the Obama administration, when relations were also strained under Mr. Xi’s predecessor, Hu Jintao. The disputes back then centered on cyberespionage and China’s military buildup in the South China Sea.

Mr. Obama hoped nonetheless to make progress on other fronts, including combating climate change and curtailing the nuclear ambitions of North Korea and Iran. He gave Mr. Biden, his vice president, the role of cultivating Mr. Xi, then China’s leader in waiting.

During a visit to China in 2013 Mr. Biden worked with Mr. Xi to ease military tensions and warned him against expelling American journalists based in China. Mr. Xi, standing in the Great Hall of the People in Beijing, called Mr. Biden “my old friend.”

As a candidate, Mr. Biden’s rhetoric has shifted dramatically, vowing to “get tough on China,” in step with a broader bipartisan shift in sentiment in recent years. Last week, he called China a “serious competitor,” though not an opponent, a term he has used to describe Russia.

During a Democratic debate in February, Mr. Biden said that as vice president he had spent more time with Mr. Xi than any other world leader up to that point and understood the nature of the man he would be dealing with, if elected.

Chinese officials are accustomed to China-bashing during election season in the United States. “In the current atmosphere, whoever is weak on China will lose points,” Wei Zongyou, a professor at the Center for American Studies at Fudan University, said.

Yet, Beijing worries that Mr. Biden’s rhetoric is not just bluster, and that if elected, he would work more forcefully to penalize China on human rights issues than Mr. Trump, though his administration has recently imposed sanctions on a number of Chinese officials and companies. Mr. Biden has denounced China’s repression of Muslim Uighurs as genocidal and vowed to meet with the Dalai Lama, the exiled Tibetan spiritual leader.

Mr. Trump, who rarely speaks out on rights issues, expressed support for Beijing’s crackdown on Muslims in Xinjiang in a private meeting with Mr. Xi, according to John Bolton, Mr. Trump’s former national security adviser. The president has yet to meet the Dalai Lama.

Some experts in Beijing are concerned about Mr. Biden’s pledge to craft new trade agreements to counter China’s economic influence in Asia and elsewhere. They also worry he could better mount a global defense of democratic values than the administration has, isolating or constraining Beijing.

“I am under no illusion that Biden would be better,” said Shi Yinhong, a professor of international relations at Renmin University in Beijing. He added that Mr. Biden could feel pressure to act even more forcefully toward China, raising the risk of a military confrontation, something Mr. Trump has been averse to.

In Beijing, Mr. Trump is viewed in some ways as favorable because of his transactional approach, despite the sharp deterioration in relations since the coronavirus pandemic.

The Communist Party has also benefited from images of chaos and division that have emerged from the United States under Mr. Trump. That has allowed the propaganda organs to highlight the strengths of China’s authoritarian system in curbing the coronavirus outbreak.

“From the party’s point of view, Trump is a rolling advertisement for how bad democracy could be,” said Kevin Rudd, the former prime minister of Australia, who maintains close ties to Chinese officials.

Mr. Rudd said Chinese leaders see Mr. Trump as a “genuinely negative force” when it comes to preserving American alliances in Asia and beyond.

Mr. Trump, who, according to Mr. Bolton, asked Mr. Xi to help his campaign, is now asserting that Beijing wants him to lose because of how he has pressured China on trade and technology.

The director of the National Counterintelligence and Security Center, William R. Evanina, echoed that in an assessment last month, citing Beijing’s growing criticism of the Trump administration’s handling of the coronavirus pandemic and the United States’ closure of the Chinese Consulate in Houston. He and other administration officials have not provided any evidence of Chinese officials using social media or other means to support Mr. Biden.

Some Chinese experts have expressed hope that Mr. Biden, if elected, might pursue a more traditional model of diplomacy, seeking to find common ground with Beijing on issues such as climate change or public health.

Chinese leaders have long pushed for that kind of collaborative approach, though officials from both parties in the United States are increasingly frustrated by years of seemingly fruitless discussions.

“If Biden takes office, China and the United States will still maintain conflicts and contradictions on some issues, but there will be an aspect of more cooperation,” said Jia Qingguo, a professor and former dean of the School of International Studies at Peking University.

In China’s strictly controlled political debate, a “pox on both houses” sentiment prevails online, with no clear favorite emerging. Nationalist voices routinely assail the Trump administration for its policies, though the government has toned down some of the outrage and made repeated calls for dialogue as tensions with the United States have soured badly.

No matter who wins in November, China’s leaders seem to recognize that opposition to Beijing’s agenda has mounted across the political spectrum in the United States.

If Mr. Biden prevails, he might find it challenging to undo many of the Trump administration’s actions against China, leaving Beijing facing the same panoply of disputes it does today.

“The broader atmosphere is tough or even unfriendly to China — everyone can see that clearly,” Professor Wei at Fudan University said. “The relationship between China and the United States will not return to the past.”