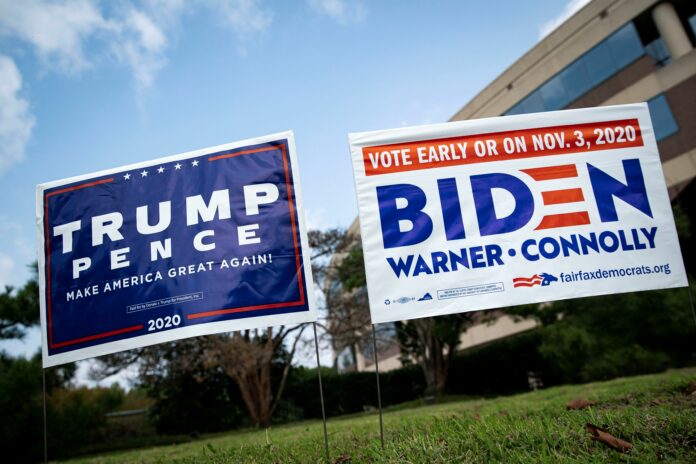 If the presidential debate Tuesday results in a clear winner, there could be a much bigger market reaction than there has been following past political debates, analysts said.

President Donald Trump and former Vice President Joe Biden head into the debate with Biden leading. To the market, it is Biden’s to lose, and if he does, some see it potentially weakening his chances in November — a possible positive for the stock market.

Biden has said he would raise taxes on corporations and the rich, as well as increase capital gains taxes. He also is expected to increase regulation. Biden has proposed raising the top tax rate for capital gains for the highest earners to 39.6% from 23.8%, and he would boost the corporate tax rate from 21% to 28%, but also take away some other advantages.

“The market is looking at this in a very binary way,” said Peter Boockvar, chief investment officer at Bleakley Advisory Group. “Putting aside your politics, if you just look at the math of higher capital gains taxes and higher corporate tax rates, one is going to lower your returns and the other is going to lower corporate profits.”

Biden leads Trump by 6.9 percentage points in an average of major polls on RealClearPolitics.com.

“I think there’s a real question about Biden’s age and health, and he could put those to rest with a solid debate, and he could also cause people to have more doubts about whether he’s fit to be president,” said Andy Laperriere, head of policy at Cornerstone Macro. “I think it has the potential to change voters’ minds. I think it has the chance to change investors’ perceptions about who is going to win.”

Looking for a clear winner

Dan Clifton, Strategas’ head of policy research, said that historically the incumbent does poorly in the first debate as President Barack Obama did against Mitt Romney in 2012. Clifton said he expects to see market reaction to the outcome of Tuesday’s debate in individual stocks and sectors, but he noted the broader market does not show a clear pattern of reacting to debates.

“The market has a 60% probability of Biden winning. Anything that can give you a greater view, anything other than a draw, is going to be market moving,” Clifton said.

He added that a good gauge for the market reaction will be how well for-profit prison and school stocks fare.

Those stocks include Navient, Perdoceo Education, Geo Group and Corecivic.

Clifton said that historically, the debate winner has moved the polls by 2 percentage points.

“If history holds and the challenger beats the incumbent in this debate … Biden would have a 5-point lead in the swing states,” he said. “If Trump moves the needle by two points, he’ll be in better shape today than he was in 2016 when he won.”

Stocks were sharply higher Monday, with all major sectors higher and cyclicals, like energy, financials and industrials leading.

“All of our Trump stocks are up big today -student lenders, private prisons, for-profit education, defense, energy. It’s all going higher,” Clifton said. “That could be two things. People taking off their shorts [positions], or other people could be making a bet that Biden’s not going to do well and want some exposure to underpriced Trump stocks.”

Clifton said either candidate has the ability to help his party’s Senate candidates, as the Senate races in all the states Trump won in 2016 went Republican. He said stocks that would be vulnerable to higher taxes trade more around the idea of a Democratic sweep of the White House and both houses of Congress than just a Biden win, since he could not raise taxes without a Democratic Senate.

“What we’re trying to get at in this debate is when does Biden want to raise taxes. Getting that clarity would be important,” Clifton said.

He said if Biden does well, that favors non U.S. stocks over U.S. stocks. Biden would be negative on China but not as much as Trump, so the economic decoupling of the U.S. and China would be slower and Chinese stocks could benefit. Sector winners for Biden would include renewable energy, infrastructure stocks and tech stocks with large foreign revenues and exposure to China.

The issue for health care stocks is less clear, but managed care, medical devices and hospitals could weaken if Biden discusses a public option on health care.

“If Biden wins, but Amy Coney Barrett is seated, you still have the Supreme Court in front of you,” said Clifton. The Supreme Court is expected to hear a case on the Affordable Care Act, which was adopted during the Obama administration when Biden was vice president.

Treasury yields were also slightly higher Monday, with the 10-year Treasury at 0.66%.

Michael Schumacher, director of rate strategy at Wells Fargo, said the debate has the potential to move the bond market. “Most people talk about these things and get all fired up and nothing happens, but this is such a weird year… This seems like the first big shot to see these guy in action. We think it’s a big event,” he said.

Schumacher said if Trump is perceived to win, there could be a positive move in risk markets and the bond market could sell off, sending yields higher. “We think that pushes the 10-year yield up to 75 or 80 basis points,” he said. “If Biden wins, then the debate is risk off.” That could drive the 10-year yield to 0.6%, he said.

“It matters who looks like they won the debate, but I think there could be talk about the economy,” Cornerstone Macro’s Laperriere said. “I think mostly Biden would be the more interesting one because he’s a change from the status quo, but what does he signal for priorities for economic policy . We know what his positions are but what will he emphasize and prioritize,”

A clear winner in the debate regardless of who it is may  also prove to be a positive for stocks because it could remove some of the uncertainty surrounding the election, according to Tom Block, Washington policy strategist at Fundstrat.

“The market does not like uncertainty, and a draw just continues uncertainty. If it ends with huge momentum for one of the candidates, that probably is a positive,” Block said. He said Trump created more uncertainty by challenging the fairness of the election.

“There’s uncertainty because he has raised questions about whether he can lose without a fixed election,” Block said.

Undecideds will be pivotal

Block added that the debate may not be that dramatic.

While more than 90% of voters are expected to have made up their minds already, Laperriere said those who have not could be an important swing factor in the race.

“When you think about the calendar about what’s coming up … the first debate is the single most important event of the next six weeks,” Laperriere said . “It’s going to be the most widely watched debate.” There are two other debates on Oct. 15 and 22, and a vice presidential debate on Oct. 7.

“It’s not a big group that’s up for grabs, but the group that is up for grabs is the only one that matters,” said Laperriere. “The bases are fired up, and Trump is firing both bases up. That’s a given. I think the biggest problem for Trump is people don’t like his style and he could act presidential and that could help.”

Trump is vulnerable on the pandemic, especially among seniors who may think he didn’t take it seriously enough, Laperriere said.

“He’s not a great defender of his view so in that sense I don’t think he’s a very good debater … I think the thing that has the biggest potential in shifting this race around is the violence we’re seeing in the country,” he said. “That has the potential to move the numbers and I think Biden has been playing it too cute.”

The candidates are expected be asked about the economy, the pandemic, race and violence in cities. Trump could also be asked about a report in the New York Times that he paid just $750 in taxes in his first year as president and nothing in many other years. Fox News anchor Chris Wallace is moderating.

“We’re now starting to see what their arguments are on Tuesday night. Biden is going to claim Trump pays less taxes than a bus driver or secretary,” Clifton said. “They’re trying to do what Obama did to Romney in 2012, make him a rich fat cat that didn’t care about  the worker … They’re trying the same thing with Trump, but that’s hard to do. Those workers love Trump.”

Clifton said he expects Biden to be a good debater, but that Trump has been trying to set the stage for a potential setback should Biden do well by claiming the former vice president should be given a test to see if his performance is enhanced medically.

“They both have track records of guffaws. They both say things between wrong and inappropriate,” Block said. “I think both sides will be holding their breath for their candidate.”