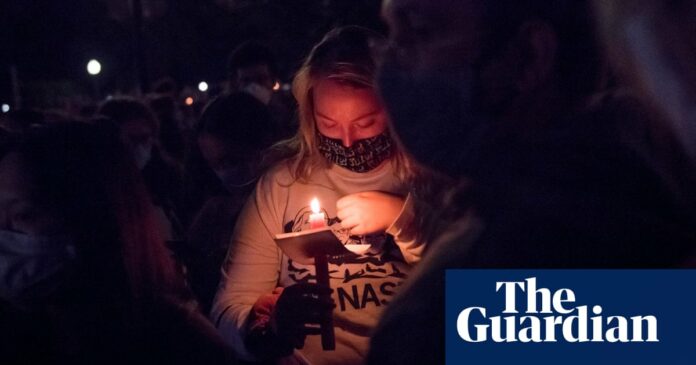 On a pavement across the street from the supreme court, school teacher Amanda Stafford chalked the words carefully: “That’s the dissenter’s hope: that they are writing not for today, but for tomorrow.”

It was a quotation from Ruth Bader Ginsburg, a justice more renowned for her dissents than her majority opinions, including on the Bush v Gore case that decided the 2000 presidential election. Ginsburg died from pancreatic cancer on Friday aged 87, the newest jolt to an angry, divided and fragile nation.

On Saturday night, as summer succumbed to the chill of autumn, thousands came to mourn her at a vigil outside the court in Washington. Some made speeches. Others sang songs. More joined hands or laid flowers and candles. Stafford paid tribute in chalk.

“I wanted to show words that are empowering at a time when a lot of people are feeling worn out,” the 31-year-old from Alexandria, Virginia, explained. “As a woman in a country getting ever more divided, it’s important to come out and make a stand for someone who made this her life’s work.”

Like many others, including numerous mothers and daughters, Stafford was hit hard by the loss of the feminist lodestar.

“I broke down crying and went to sit in a park, sobbing. I called my closest girlfriends and we cried together. What is the state of American democracy that one single woman passing away feels like a harbinger of hopelessness? We’re already in a pandemic and losing her felt like the end.”

Stafford’s homage was one of many outside the court, built in the 1930s in classical style to project the full majesty of the law, its 16 marble columns illuminated as two US flags flew at half mast. “RIP RGB,” said one banner in the rainbow colours of the LGBTQ movement. “For my daughter,” said another, simply.

“Real change, enduring change, happens one step at a time – Ruth Bader Ginsburg” was written on cardboard sign amid a sea of pictures, candles and flowers. “She kept theology off our biology” was among the acknowledgements of Ginsburg’s support for reproductive rights.

One of the most popular messages was “When there are nine” – a reference to Ginsburg’s remark, “When I’m sometimes asked when will there be enough [women on the supreme court]? And I say, when there are nine.” There were nods to a hip-hop inspired nickname, “Notorious RBG”, and a tribute that said, “Though she be but little she was fierce” – a quotation from A Midsummer Night’s Dream. Ginsburg, 5ft 1in tall, was a lover of theatre, especially opera.

But opposite the court loomed the equally imposing US Capitol, a reminder of the political war to come. Just weeks before a presidential election, Donald Trump appears poised to nominate a conservative to succeed Ginsburg, triggering a bare-knuckle brawl in the Senate.

There was grief for what the nation had lost and fear for the future of its democracy. But above all at a gathering that was part wake, part rally, there was a sense of resolve and readiness to fight, a word repeated by many of the speechmakers.

In front of a banner that urged, “Honor RGB, no confirmation until inauguration”, the Massachusetts senator Elizabeth Warren said Ginsburg “was an icon, she was a trailblazer, she was a role model, she was a friend. We are here tonight to grieve but not to despair. There is too much at stake going forward.”

Warren accused the Senate majority leader of trying to hijack the confirmation process. “Today Mitch McConnell and his henchmen believe that they can ram through a supreme court justice only 45 days before the election.

“Mitch McConnell believes that this fight is over. What Mitch McConnell does not understand is this fight has just begun … Tonight is the moment to say from the heart, with conviction, to ourselves and to anyone who’s listening: when it comes to the fight to protect a woman’s right to choose, I will fight.”

Neera Tanden, president of the Center for American Progress, told the gathering: “The horrifying tragedy of this moment is that a man who was credibly accused of assaulting 20 or so women would have the temerity to name the replacement of Ruth Bader Ginsburg.”

Someone shouted: “No way!”

Amber Jones, 65, a retired writer, held a sign that said, “Honor her wish. No vote.” She admitted: “A lot of my friends couldn’t face being here tonight. They’ve turned off the news and are trying to take their mind off it.

“Most of us are girding ourselves for the battle. The incumbent is rolling back everything we’ve worked for 50 years for. If he stays in office, it might be 50 years before we get back to where we were. I hope RGB is looking down at us and going to intercede.”

In the combustible mix of pandemic, presidential election and supreme court fight, anxieties were high. Jones said: “I’m worried about something approaching civil war because one side has all the guns. It’s not our side.”

Kia Hamadanchy, 34, a lawyer, said frankly: “I was worried for the future of America before this. Just when you think things can’t get any worse, they get worse.”

Amanda Barber, 35, a nurse carrying a sign that urged, “Honor your precedented, honor her legacy”, said she had turned to a house hunting website. “I’ve started Zillowing places in Toronto. It’s just for fun. But I’m not sure I can stand another four years of this.”