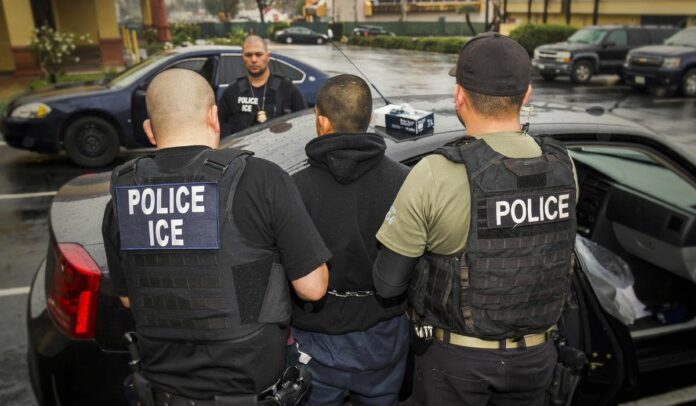 The federal government “abandoned” local sheriffs and police departments on immigration, leaving them in a legal limbo and spurring their embrace of sanctuary policies, the Los Angeles County Sheriff’s Department said.

Sheriff Alex Villanueva’s office lashed out at the Department of Homeland Security after its No. 2 official, Ken Cuccinelli, sent a scorching letter complaining about a new policy refusing all cooperation in turning migrants over to U.S. Immigration and Customs Enforcement.

Lt. John Satterfield, the sheriff’s spokesman, told The Washington Times that Mr. Cuccinelli played loose with his numbers and seemed to be making retaliation “threats” to arrest more immigrants who are in the county illegally.

“ICE abandoned its law enforcement partners long ago,” Lt. Satterfield said in a lengthy response to The Times after it reported on Mr. Cuccinelli’s letter this month.

The finger-pointing underscores how much is at stake in the debate over deportations and sanctuary jurisdictions.

ICE says it wants cooperation and said it goes out of its way to try to work with the sheriff’s department.

David Marin, the agency’s Los Angeles field office director, says he has deportation officers on standby 24 hours a day to be available should the sheriff’s office call, and they respond to the main jail in 15 or 20 minutes.

“We have not abandoned them, in fact we have made much more of an effort to work with them,” Mr. Marin said. “It just doesn’t help public safety when these criminals are released back into the community.”

Sheriff Villanueva’s policy isn’t the most expansive in the nation, but, given his county’s size and demographics, it’s the most consequential, accounting for tens of thousands of deportees over the last decade.

After President Trump took office, California imposed limits on law enforcement cooperation with ICE, but made exceptions for major crimes. Sheriff Villanueva in March announced a temporary pause on cooperating even in those exception cases, citing the coronavirus pandemic.

Last month he made the pause a permanent ban. He said cooperating with ICE was frightening immigrants into not reporting crimes.

Mr. Cuccinelli responded with his letter hoping to “shame” the sheriff into reversing, saying innocent people will die because criminals get released rather than deported.

“What we are seeing is the pollution of law enforcement by politicization,” he told The Times.

Lt. Satterfield says ICE refused to back up its detainers, calling them “a mere ‘suggestion,’ and not a requirement.”

A judge agreed, finding that the sheriff’s department held thousands of migrants under illegal ICE detainers. An appeals court last week sent the case back to the judge for a new review, but Lt. Satterfield said the lawsuit marked a major change for Los Angeles, which felt abandoned by the federal government.

Mr. Marin, the ICE Los Angeles chief, said what happened in the last administration has no bearing on the current situation, because state law prohibits localities from holding migrants for ICE anyway.

But he said the state does allow localities to notify the agency to come pick up people with serious criminal records, and Los Angeles won’t even allow that. He said since the sheriff adopted his policy, they have received zero calls.

ICE has to track the cases through public records and then go out into the community to find them, Mr. Marin said. That is more dangerous for all sides — the officers, the targets and others who might be around when the arrest is made.

It also inevitably means “collateral” arrests of people who weren’t targets for the officers, but who were found in the vicinity and are considered deportable.

Lt. Satterfield complained about those arrests.

“Threats of ‘collateral damage’ are not well taken,” he told The Times in response to Mr. Cuccinelli’s letter. “Hopefully, ICE agents are given the discretion, regardless of who they encounter in the field, to only detain and deport those previously convicted of serious and violent crimes.”

Mr. Marin said officers do have discretion and use it all the time.

A recent operation to try to roll up illegal immigrants who had been accused of victimizing people through domestic violence or other personal crimes netted 314 people in Mr. Marin’s area of operation.

Of those, 301 were targets. Of the 13 collateral arrests, all but one had a criminal record, which made them priorities for deportation, Mr. Marin said. The one noncriminal arrest was released on his own recognizance.

Jessica Vaughan, policy studies director at the Center for Immigration Studies, said ICE treating detainers as voluntary was “a politically motivated decision” made by the Obama administration. She said ICE wanted to fight, but the Justice Department, which controls legal strategy, refused.

“Instead they decided to leave the sheriffs who were getting sued twisting in the wind in federal court,” she said. “It was a deliberate decision on the part of the Obama administration officials at the Department of Justice.”

But she said Los Angeles’s decision will cost the county in terms of more victims.

“Sheriff Villanueva has abandoned the people of Los Angeles County in favor of protecting criminal aliens,” she said.

All sides agree Sheriff Villanueva’s new policy will make a significant difference in ICE’s numbers — though how much is in dispute.

In his letter, Mr. Cuccinelli referred to 11,536 detainers “issued in Los Angeles County” in the last fiscal year, covering 180 homicides, 750 sex crimes and 1,400 weapons offenses. He said releasing people with those records puts communities at risk.

Lt. Satterfield said the sheriff’s department only received 5,093 detainers, and only 20 of those included someone charged with murder or attempted murder. Of those, 15 were released to another agency and one of the detainers “was actually canceled by ICE.”

For the sex crimes, he said the sheriff’s department only got 40 detainers, and in 10 cases the department released them because ICE didn’t respond to pick them up.

ICE, in its response to The Times, said the numbers Mr. Cuccinelli cited were for all law enforcement agencies in the county. That means they included people outside of the sheriff’s control, such as those held by the city of Los Angeles.

Sheriff Villanueva announced a temporary ban on releasing inmates to ICE in March, as the coronavirus pandemic was ramping up. His announcement last month made that bar permanent.

Weeks later, the county board of supervisors, worrying that a future sheriff might try to overturn the policy, approved a motion formally enshrining it.

The board’s actions also expand the bar on cooperating with ICE to all county officials, and bans all federal immigration officers and agents from any county property, unless they carry a judicial warrant.