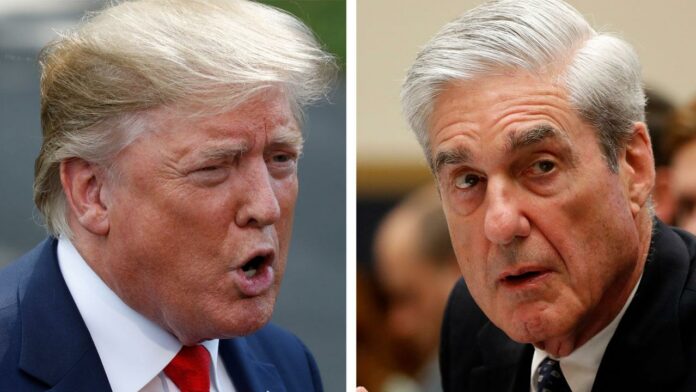 It was always a witch hunt designed to “get Trump.” Collusion was an illusion invented by a suspected Russian spy but zealously embraced by malevolent actors at the FBI and later by scheming prosecutors on Special Counsel Robert Mueller’s team of partisans.

These are the stunning revelations contained in two sets of newly declassified documents that pull back the curtain on the Russia Hoax, the dirtiest political trick in American history.

In testimony that is corroborated by records, FBI Special Agent William J. Barnett has exposed how the bureau’s collusion investigation of Donald Trump was based on nothing more than “supposition on supposition” and devoid of any credible evidence.

FBI OFFICIAL ON MUELLER TEAM SAID FLYNN PROSECUTION HAD ‘GET TRUMP’ ATTITUDE, COLLUSION PROBE WAS ‘NOT THERE’

Assigned to lead the bureau’s original investigation into former White House National Security Adviser Michael Flynn, Barnett came to realize that the case against Flynn was being engineered or manipulated as way to damage President Trump. Flynn, whose life and livelihood were ruined, became collateral damage.

FBI investigators, who concluded there was no plausible case against Flynn, were ignored. Instead of closing the investigation down, the critical decision to move forward was made “top- down.” Then-Deputy FBI Director Andrew McCabe, who had a contentious past relationship with Flynn, was calling the shots. The retired three-star Army general didn’t stand a chance.

Despite the paucity of evidence against both Flynn and Trump, Agent Barnett reluctantly agreed to join the special counsel team to provide some balance (diversity of thought) to what was clearly a partisan crusade. He naively hoped his perspective might counterbalance the anti-Trump “group think.” It was a fool’s errand.

For example, Barnett quickly discerned that lawyer Jeannie Rhee “was obsessed with Flynn and Russia and she had an agenda.” This was no surprise, since Rhee had represented Hillary Clinton in her email scandal, defended the Clinton Foundation in a civil racketeering case, and donated to Clinton’s campaign for president.

As a key member of Mueller’s squad, Rhee was in a position to target the person who had defeated the candidate she had supported and defended.

Given how obvious a conflict of interest that represented, it was shameful for Mueller to even consider hiring her. But he seemed unbothered by Rhee’s multiple disqualifying conflicts.

Indeed, Mueller utilized other lawyers who held the same anti-Trump prejudices. Amazingly, Mueller sheepishly admitted during his congressional testimony that he had no idea of Rhee’s involvement with Clinton when he hired her. Right.

Barnett meticulously documented the bureaucratic malfeasance and malicious politicization of the legal process. In what are known as 302 reports, he memorialized “the ‘get Trump’ attitude by some at the SCO” (Special Counsel Office). Whatever the president said or did was reflexively misrepresented by Mueller’s confederates.

When President Trump asked investigators to “get to the bottom” of a matter, special counsel lawyers interpreted it as “cover it up.”  The firing of FBI Director James Comey was viewed as conclusive proof of obstruction by the president, instead of an action motivated by some other logical reason such as the president’s dislike of Comey and a desire to replace him.

While many of Mueller’s lawyers may have been motivated by a hatred of Trump, Barnett said it seemed like they “wanted to be part of something ‘big,’ a successful prosecution.”  This is exactly what Attorney General William Barr warned about in a recent speech — overzealous prosecutors who want to enhance their careers and reputations at the expense of seeking justice. Innocent people become their victims.

We now know that Agent Barnett’s testimony and his documentary evidence is a component U.S. Attorney John Durham’s criminal investigation into the origins of the FBI’s Russia probe. This same evidence will also be presented in federal court Tuesday, as Flynn’s lawyers and the Justice Department present arguments that the case against him should be dismissed. The joint motion must be granted if U.S. District Judge Emmet Sullivan has any integrity.

All of this comes at the same time as the release of another set of declassified documents detailing how the infamous “Steele dossier” alleging Trump-Russia collusion actually originated from a suspected Russian spy who was designated as a possible “national security threat.”

In simple terms, the phony collusion narrative appears to have been the clever product of Russian lies and disinformation designed to damage Trump and funded by the Clinton campaign and Democrats. This is precisely what I argued in my book, “Witch Hunt: The Story of The Greatest Mass Delusion in American Political History.”

Comey’s FBI knew this all along, having interviewed Steele’s primary source in January 2017 — just days after Trump was inaugurated as president. But the bureau kept it carefully concealed.

Despite knowing that the dossier was not remotely credible, Comey and others used it to spy on former Trump campaign adviser Carter Page. Judges on the Foreign Intelligence Surveillance Court (FISC) were deceived, and the court itself was defrauded.

Evidence continues to mount that Trump was been victimized by rogue and lawless government actors throughout his entire presidency. Law enforcement was weaponized for a purely political purpose. Public officials chased a specious conspiracy that never existed, as Democrats and the biased anti-Trump media spun the daily tale that Donald Trump was a traitor working with and for the Russians.

If Americans are to have any faith in their government, Durham must expose the full truth. And those who betrayed their positions of trust should be held accountable.