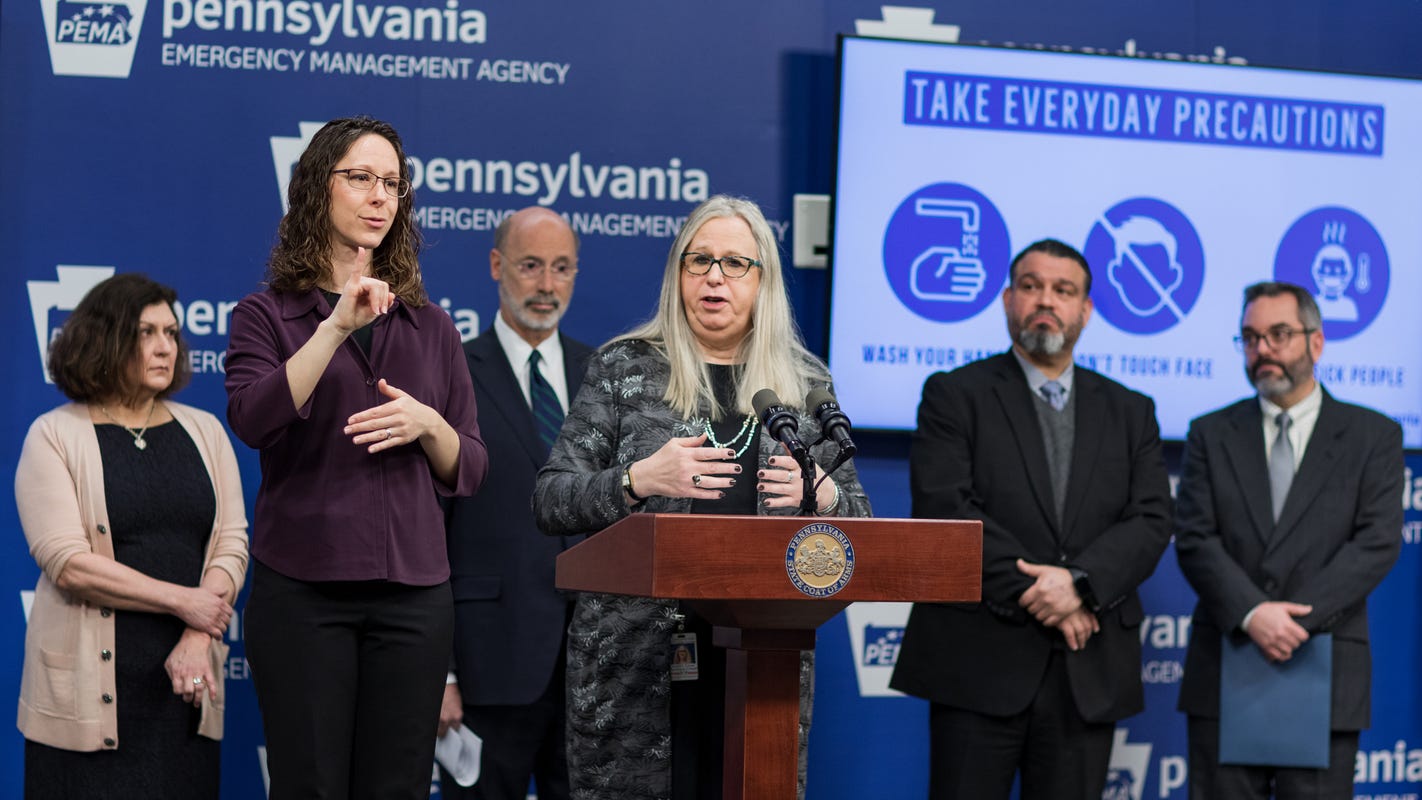 A previous version of this video incorrectly stated how many people the 1918 Spanish influenza killed.

In New Hampshire, Gov. Chris Sununu holds nearly daily news conferences carried on WMUR, where he describes executive orders or offers feel-good moments about charitable contributions to leaven his dire warnings. The state had 1,020 cases and 23 deaths through Monday morning, according to the state Health Department.

“This could spike at any moment,” Sununu said April 9. “That’s exactly what we’re trying to avoid.”

But then Sununu steps aside for Lori Shibinette, commissioner of Health and Human Services, or Benjamin Chan, state epidemiologist, to explain why steps like staying home could reduce the strain on hospitals and save lives. Projections call for as many as 40,000 infections and 800 deaths statewide if no action is taken, but that the figures could be cut in half – or more – with “community mitigation” efforts, he said.

The president routinely wields his lengthy briefings to spar with reporters, push an experimental treatment or solicit praise for his successes. But as governors across the country brace for a looming surge of disease in their states, they often turn to doctors to interpret what the numbers mean and explain why recommendations matter.

Pennsylvania Gov. Tom Wolf  warned in a Facebook news conference April 8 that “we do not yet have the virus under control.” The state had 24,199 cases and 524 deaths by noon Monday, according to the state Health Department.

But then he turned to the state’s secretary of health, Rachel Levine, for details on where infections were clustered and how scarce resources are deployed. For example, she said the state received 1.8 million N-95 masks and nearly 900,000 surgical masks from the national stockpile. She said the state is studying ways to sterilize used masks.

At the White House briefings, Trump has contradicted or ignored his health advisers at the podium. On March 24, Trump suggested reducing social distancing by Easter April 12 before later reversing himself and keeping the federal guidance until at least the end of the month. On April 3, when the Centers for Disease Control and Prevention suggested that people voluntarily wear face masks, Trump said: “I don’t think I’m going to be doing it.”

One of the testiest exchanges involved the anti-malaria drug hydroxychloroquine. Trump has promoted the drug as a possible game-changer in treating Covid-19. But Anthony Fauci, director of the National Institute of Allergy and Infectious Diseases, has cautioned that tests need to confirm how well it works against the respiratory disease.

Trump has sparred with state governors throughout his coronavirus response with many states criticizing the administration’s response. Now, as the nation grapples with re-opening the economy, governors on the East and West coasts have signaled they’re not ceding ground to the federal government in making that decision.

Trump insisted that he has “ultimate authority” to determine when to loosen the stringent social-distancing guidelines and stay-at-home order in place across the country. But governors say they bear the responsibility to decide when it’s safe for their state residents to return to work.

“I’m not interested in political opinions,” New York Gov. Andrew Cuomo said Monday. “I’m interested in what the experts say about this.”

In recent weeks, some Republicans have expressed concern about White House briefings that have meandered longer than two hours and often feature combative exchanges between the president and reporters.

Jason Miller, a former Trump campaign official and conservative podcast host, said the president’s appearances shouldn’t be judged on time metric, but that he probably doesn’t need to attend every briefing.

“If the president has something important to announce, then by all means he should go and take the podium and take advantage of having the briefing room to go and deliver it,” Miller said. “But if it’s just to field questions, then I don’t think he needs to do it every single day.”

Sen. Lindsey Graham, R-S.C., told the New York Times last week the president “sometimes drowns out his own message.” The conservative Wall Street Journal editorial board issued a searing op-ed noting that what was once “a good idea to educate the public about the dangers of the virus” has now become “all about the President.”

But Trump has dismissed suggestions that he should curb his appearances in the briefing room, often boasting about “ratings” and the number of Americans who watch the daily news conferences.

“The Wall Street Journal always ‘forgets to mention that the ratings for the White House Press Briefings are ‘through the roof,’” Trump tweeted in response to the op-ed last week.

Trump saw an initial bump in his approval ratings for his handling of the pandemic, a surge presidents have historically seen during a national crisis, including Bush’s high ratings after the terrorist attacks Sept. 11, 2001. But recent polls have shown a drop in Trump’s support while the nation’s governors and his own medical experts have received the highest marks in the handling of the coronavirus crisis.

Some Republicans suggest Trump could benefit from delivering opening remarks and taking a few questions before deferring to Pence, Fauci and Deborah Birx, who coordinates the White House task force.

Fleischer credits Trump for his frequent appearances, but suggested they don’t have to occur every day and could alternate with the task force.

“Standing at that podium for more than 30 minutes, it’s like being at a bar after two in the morning,” Fleischer said. “All the good stuff has already happened and most of what happens after 2 a.m. is bad.”

Friction between governors and Trump

Cuomo has occasionally sparred with Trump as the executives exchange barbs in daily briefings about the federal response. He and other Democratic governors, including Gretchen Whitmer of Michigan, J.B. Pritzker of Illinois and Jay Inslee of Washington state, have criticized the slow pace of federal assistance.

But Trump tweeted that states and hospitals were receiving massive amounts of medical supplies, but that “some have insatiable appetites & are never satisfied.”

“The White House briefings are unique. There is no hotter temperature room in America,” he said. “The governors have a much more passive, easy press corps, especially compared to Donald Trump’s.”

Important points can be overlooked behind the president’s heated exchanges with reporters. Birx and Fauci often take the podium later on to provide updates on testing, equipment and the latest projections on the spread of the coronavirus, a time when some Americans may tune out or change the channel.

“I think that a lot of the important questions thus far during these press briefings, whether it comes to data or metrics or the important details about coronavirus, a lot of times those get pushed until hour number two,” said Miller, the former Trump campaign official. “Those are the types of things that should be getting asked in the first half hour as opposed to in the last half hour.”

Fauci told the Associated Press that the duration of the briefings was “really draining.”

“If I had been able to just make a few comments and then go to work, that would have really been much better,” he said. “It isn’t the idea of being there and answering questions, which I really think is important for the American public. It’s the amount of time.”