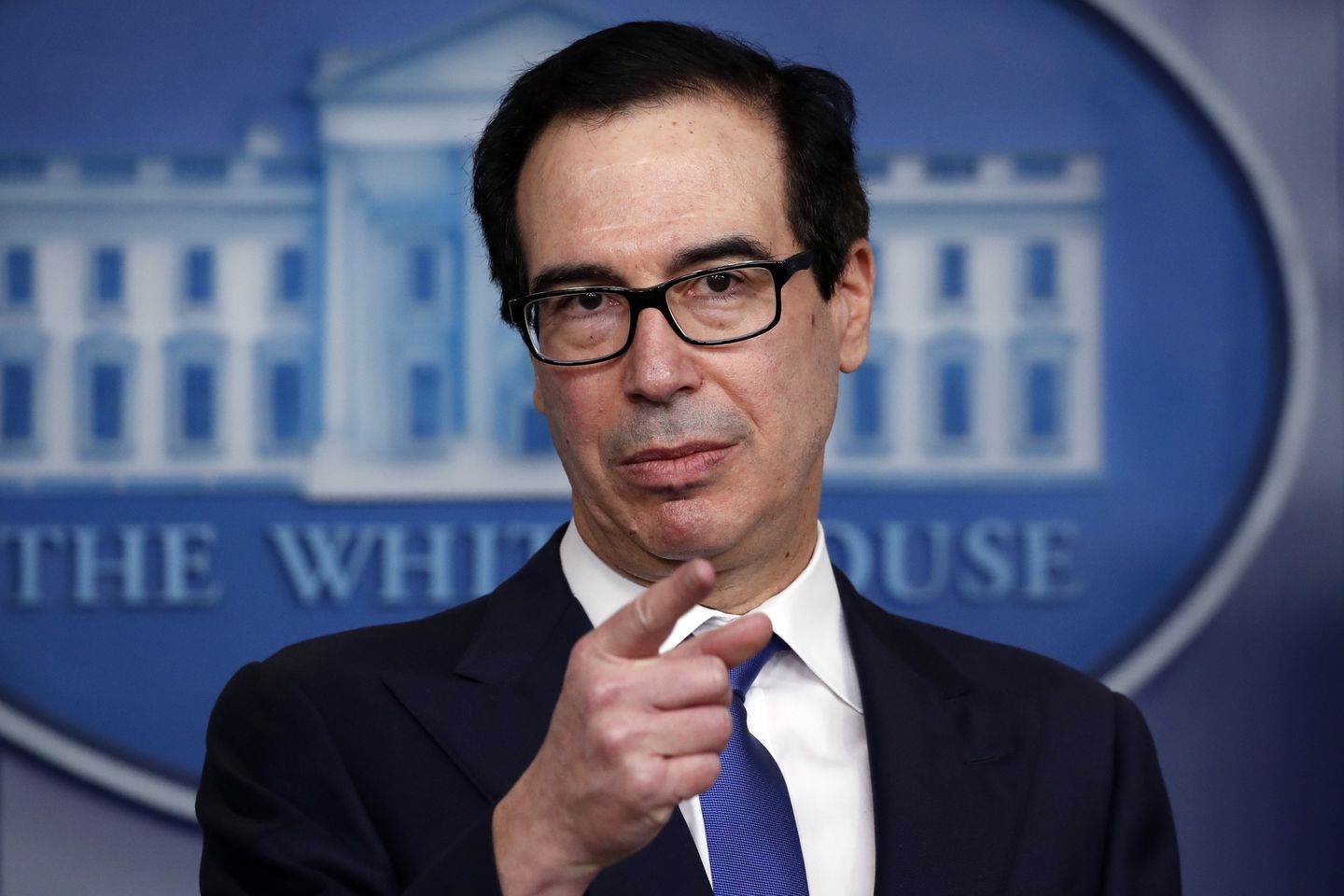 Many Americans woke up Wednesday expecting to find a payment of $1,200 or more from the U.S. government in their bank account, but instead they realized nothing had arrived yet — or the wrong amount was deposited. Parents of young children complained they did not receive the promised $500 check for their dependent children.

U.S. Treasury Secretary Steven Mnuchin has instructed the Internal Revenue Service to get payments out as fast as possible to help offset the pain of losing jobs and shutting down businesses, but numerous glitches — affecting filers who used tax preparers, parents of dependent children and people with 2019 tax returns still to be processed — are delaying payments and causing confusion.

Several million people who filed their taxes via H&R Block, TurboTax and other popular services were unable to get their payments because the IRS did not have their direct deposit information on file, according to the Treasury, companies and experts.

The IRS launched a “Get My Payment” tool Wednesday for people to track the status of their payment and enter direct deposit information, but many who used it said they received a message saying “Payment Status Not Available,” a frustration that left them without answers.

Some parents told The Washington Post that they received a $1,200 payment for a single head of household or a $2,400 check for a married couple but that the IRS left out the $500-per-child-under-17 payments.

IRS and Treasury officials acknowledged they are aware of these issues and are working to fix them. A Treasury spokeswoman noted the IRS processed nearly 80 million payments in less than three weeks. That’s just over half the 150 million payments expected to go out under the Economic Impact Payment program.

Social Security recipients will automatically receive the payments later this month. Paper checks will have President Trump’s name on them and are expected to start going out in coming days. Low-income Americans who do not normally file a tax return, including the homeless, are also eligible to receive the $1,200 check, but only if they enter their information in a new non-filers tool on IRS.gov.

Below is a rundown of the most common issues preventing people from getting the payments and what steps the IRS recommends to rectify them.

Millions of H&R Block, TurboTax and Jackson Hewitt customers didn’t get their payments

Customers who use popular tax preparation services such as H&R Block, TurboTax and Jackson Hewitt complained on Twitter and to The Post that they didn’t get their stimulus payment on Wednesday.

Up to 21 million tax filers could be affected, said consumer law expert Vijay Raghavan, because the IRS does not have these people’s direct deposit information on file if they received an advance on their tax refund from these companies or had the fee for tax preparation taken out of their tax refund.

The reason is that tax preparation companies received these people’s tax refund first, deducted their fees and then distributed the remaining refund to the customers. Because of that, the IRS had a “temporary bank account” on file that the tax preparer created for the 2019 tax season, Raghavan said.

The IRS is aware of the problem, a spokesman said. Chi Chi Wu of the National Consumer Law Center said the IRS told her that it found a way to work around this problem and a “significant percentage” of these people will ultimately get a direct deposit. But so far, many are still waiting.

Matt Sielen of Chino, Calif., who recently lost his job, was shocked to discover that he would not be receiving the payment on his H&R Block Emerald Card, the debit card on which he received his tax refund. Sielen and his wife, a nurse who cares for homebound people, have two young children and were counting on the $3,400 payment to pay rent and other bills. The couple had H&R Block take their tax preparation fee out of their refund earlier this year, which means the IRS didn’t have their bank details.

“I’m not happy with H&R Block. I probably won’t be doing business with them ever again,” Sielen said.

After he was unable to get through to anyone on H&R Block’s phone line, Sielen went on the IRS website and was told to enter the couple’s bank information. He did that but wishes H&R Block had been clearer about what to do. The company’s website says that “we are still waiting for answers from the IRS regarding the majority of Emerald Card holders.”

The Post spoke with six other people in a similar situation who have not received the IRS payment.

Frustrated taxpayers also took to Twitter to vent about their inability to track when and how they would be getting their money. Some posted an image of the message they received after entering their information: “Payment Status Not Available.”

There are a number of reasons the tool can’t check the status of a stimulus payment, the IRS said.

Information on the site is updated only once a day, so checking more than once in a 24-hour period won’t yield a different result.

Receiving the wrong payment amount or no money for dependent children

A number of people indicated they received the incorrect payment amount. Five people contacted The Post saying they didn’t receive any money for their children or they received only one child payment when they have three kids.

People whose adjusted gross income qualifies them to receive a stimulus check are supposed to receive an additional $500 for every dependent child under 17. But one reader from Kentucky with three children under age 15 said she received only $1,200 on Wednesday. She double-checked her 2019 tax return and verified that all three children were listed as dependents.

Individuals who receive Social Security retirement, survivors or disability (Social Security Disability Insurance) benefits or Railroad Retirement benefits will automatically receive the $1,200 stimulus payment if they are eligible. The IRS announced it has added to this group Supplemental Security Income (SSI) recipients. The automatic payments for SSI recipients will go out no later than early May, according to the agency statement.

However, the IRS says if you fall into one of those categories and have children under 17, you have to use the non-filers tool at IRS.gov to claim the $500 payment per child. You’ll need a valid Social Security number or Adoption Taxpayer Identification Number for each of your dependents.

Jamie Jones, a Virginia widow and mother of three receiving Social Security survivor benefits, said she received her $1,200 payment, but her deposit did not include the extra $1,500 for her children. Because she filed a tax return for 2019, she couldn’t use the non-filers tool, she said. She listed her children, ages 8, 10 and 12, on her tax return, so the IRS should have made the additional payment.

“I’ve never been one to look for handouts, and work hard to try to keep my family afloat,” Jones said. “My oldest daughter currently has outgrown her tennis shoes, and even though the stores were shut down, I had planned to allocate some of this money to an online purchase to get her a new pair of shoes.”

A spokesman for the IRS wasn’t sure why Jones’s payment didn’t include the money for the children.

People who receive what they believe is an incorrect amount will have an opportunity to let the IRS know. The agency is required to mail a letter to your last known address 15 days after sending your payment. The letter is supposed to explain how the payment was made and provide instructions on how to report any issues.

To thwart fraudsters, the IRS tool locks out people who try multiple times a day. This has become a problem for people trying to give the IRS direct deposit information.

Andrea Tasan and her husband were eventually locked out of the Get My Payment site after trying to check the status of their payment.

The Maryland couple filed tax returns in 2018 and 2019, each time requesting their refunds be applied to pay the following year’s taxes. Because of this, the IRS has no direct deposit information for them. The Get My Payment tool confirmed they were eligible for a stimulus payment based on their 2019 return, but they couldn’t get any more information.

“The system returned with the response that our information did not match their records,” Tasan said.

They tried again using their adjusted gross income and refund amounts for their 2018 return. Again they were told the information doesn’t match IRS records. The system then locked them out because they made “too many attempts” to access the tool.

They now have to wait a day to try again. The IRS is also preventing people from changing the bank account information already on file as a measure to prevent fraud.

Others complained about a glitch in the tool that won’t allow them to move forward because they neither owed any money to the IRS nor received a refund for 2018 or 2019. Typing in zero didn’t work.

“I could not give an affirmative answer to any of these questions since I owed no tax and did not receive a refund,” one reader wrote. “Submitting the form returned an error so I tried again and answered ‘yes’ to owing tax and ‘zero’ to the amount. Error again.”

“We are aware of the problem and are checking into it,” IRS spokesman Eric Smith said.