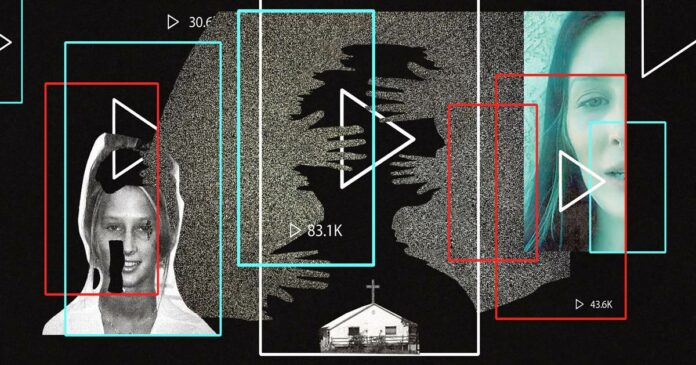 During Blaze Lutwinksy’s first night at the ranch in 2011, she said, a medical condition caused her to vomit a bologna sandwich Boyd and Stephanie ordered her to eat.

“I ate the bologna, I threw up, immediately I was restrained in my own vomit,” Lutwinksy, who was 16 at the time, said. “He told me I better get used to following rules or this was going to be my life.”

The Householders permitted residents to call their parents once every other week for 15 minutes on speakerphone. If girls said they wanted to come home or complained about their treatment at the ranch, 17 former residents and staff members said, the Householders would end the call immediately. Letters home were also censored by Boyd, they said.

Dajah Potter, 20, said social services employees came to the ranch four times when she was there from 2016 through 2018. If they came when the girls were outside, she said, the Householders would instruct everyone to come inside and into a secluded room to keep them out of sight of the social workers.

“They were afraid we’d tell the truth, which is me being abused,” Potter said. She said Boyd once sprayed her with a hose outside in the winter because he thought she was faking being sick.

Stephanie said there are witnesses who can refute the abuse allegations, but declined to share their names.

“There are hundreds of girls who have been helped and chosen to make better decisions and become better persons in society,” Stephanie said in an email. “Unfortunately, there are a few girls who choose to continue their past acts and some are now making false accusations.”

Amanda Householder’s relationship with her parents deteriorated as she got older. As a teenager, she often filled in as a staff member, but she said her parents also placed her in the program as a punishment. She said the extent of her bad behavior “consisted of thinking boys were cute and listening to Green Day.” She moved in with other family members in 2009, at 17, and the next year moved to California.

For the first few years on her own, Amanda pushed back on many of the stories from former residents. She antagonized them on internet forums when they spoke negatively about Circle of Hope. But after having a child, and once she began talking directly with former residents, she began to reevaluate. She said she noticed their stories lined up. Amanda apologized for not believing them earlier, and for not intervening when she still lived at the ranch.

“I knew the restraining was bad,” said Amanda, who is now a stay-at-home mom, “but I just kick myself in the ass for not standing up against it back then. I felt guilty, I felt like it was my fault, but that’s one of the things I worked through in therapy. I had to get over that.”

In 2018, Amanda connected with Michelle Nickerson, who had been trying to report concerns about Circle of Hope to the Missouri Department of Social Services because her 16-year-old sister was at the ranch. Nickerson had been in touch with the Missouri Highway Patrol, and together, they began referring former residents to speak with the officers.

Complaints about Circle of Hope date back to the year it opened.

Genevieve Dean said she called the sheriff’s department and social services in 2006 and asked them to perform a welfare check at the ranch because she worried her 15-year-old daughter, Amanda, was being abused. In a letter home, Amanda had included a secret safe word she had with her mother to signal someone was hurting her. Amanda said in an interview she was only fed quarter portions of meals, her medication was withheld and she saw Boyd smack girls. Both the sheriff’s department and social services declined to conduct a welfare check, Dean said, and she pulled her daughter out of Circle of Hope.

The following year, in 2007, Donna Maddox said she pulled her daughter, Kelsey, then 14, out of the ranch after her first visit, when she saw bruises on her that Kelsey said came from restraints. Maddox said she reported the school to several state agencies, including a consumer complaint to the Missouri Attorney General’s Office because Circle of Hope had falsely claimed to be registered with the state’s education department.

The Missouri Attorney General’s Office said it received three consumer complaints regarding Circle of Hope, and each one had been “referred to the local prosecutor or proper authority.” The Missouri Department of Elementary and Secondary Education said it received three complaints about Circle of Hope since 2008, but has no oversight of private schools. The Missouri Department of Social Services said there were four reports of misconduct at Circle of Hope since 2006 that the agency substantiated: one of neglect, one of physical abuse and neglect, and two regarding sexual abuse.

The social services department said it cannot reveal when those reports were filed, who was accused or what action, if any, was taken.

“I wouldn’t think to ask, ‘Are you providing water to the girls?'”

Parents said it’s unacceptable that those complaints were not disclosed by the state.

“Why is that not a public record or known?” asked Brian Stoddard, a pastor in Washington state, who placed his daughter Emily at Circle of Hope in late 2017 when she was 15 and struggling with anger issues. “If I had seen that, I certainly would’ve changed my mind.”

Brian and his wife, Michelle, removed Emily in July this year after learning more about the ranch from former residents online. On the way out, Emily said, several girls gave her phone numbers for their families on slips of paper that she stuck in the sole of her shoe. “They asked me to shut the place down or get them in a safer place,” she said.

The Stoddard family went to the sheriff’s department to give a statement before leaving town, they said. Emily said that Boyd handcuffed girls frequently as a punishment, and performed what he called “swats,” which were spankings with a leather belt or paddle. The girls often did manual labor outside in 90-degree heat with no sunscreen and only one water bottle among 24 girls, Emily said.

“I wouldn’t think to ask, ‘Are you providing water to the girls?’” Michelle Stoddard said. “It’s just cruelty. Emily had a pretty bad sunburn and they sent her back out to work the next day, and now she has scars from sunburn. It’s ridiculous. It’s evil.”

Brian said before they left the ranch, Boyd requested that Emily sign a letter stating she had not been abused in any way. Brian refused, but two other parents and two former residents said they did sign similar forms, fearful Boyd wouldn’t let them leave otherwise.

Getting action on TikTok

The video Amanda Householder received from Askins does not show Boyd on screen, but she and several former residents said they instantly recognized his voice. The man is heard advising residents to attack a girl: “Knock her out.” Emily Stoddard, who was still at the ranch then, said Boyd was speaking to them in their dorm through an intercom system, and he was chastising a girl for drinking water without permission. Askins said he called child protective services when he left the ranch.

Amanda posted the video on Facebook and Twitter in March. Miranda Sullivan, a co-host of the podcast “Troubled,” about the troubled teen industry, saw it, and invited her on the show. Later, Sullivan suggested that Amanda start posting on TikTok, where others had been sharing their experiences at troubled teen programs.

“The benefit of TikTok is the kids who get activated and are amazingly useful,” Sullivan said. “With Circle of Hope, it got enough random people who were highly motivated to nag the local offices in Missouri who are not used to this much attention.”

As Amanda and former Circle of Hope residents began to post their own TikTok videos, a Cedar County sheriff’s deputy messaged her on Facebook on May 17 and said their office wanted to talk. The sheriff’s department told NBC News an investigation remains ongoing, and is being led by the state’s social services department. Gaither said his office is still waiting for them to complete their investigation and present a report to him.

“If they’re not careful, they can kill you.”

Multiple former residents said they felt an urgency to try to shut down Circle of Hope after seeing a video of Cornelius Frederick, 16, being restrained at a youth facility in Michigan in April. Cornelius died two days later.

“That was always what I feared could happen,” said Carrie Reeves, who was a resident at Circle of Hope in 2014 when she was 14 and recalled Boyd and Stephanie restraining her with help from six other girls. “They are sitting on you, they are inflicting so much pain on you. If they’re not careful, they can kill you.”

After the state removed all the girls from Circle of Hope in August, the Householders told the Kansas City Star that they would not reopen because they didn’t want to deal with a “corrupt” sheriff’s department. This week, the ranch property appeared listed for sale on several real estate websites. The Householders have also taken down the Circle of Hope website.

Amanda said she hasn’t spoken with her parents since 2016. She said she feels relieved the ranch is closed, but she worries her parents will try to open another school, so she intends to continue pressing for criminal charges.

“I do know that what I’m doing is right,” Amanda said, “and it makes it easier because I know my parents hate me for it.”