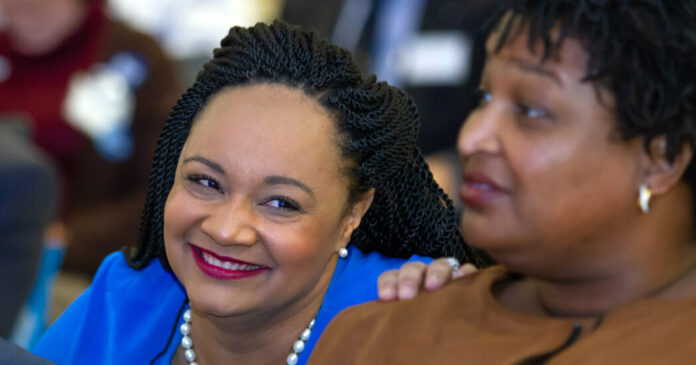 ATLANTA — Nikema Williams, a state senator from Atlanta, emerged from a conclave of Georgia Democratic officials on Monday as the appointed successor to Representative John Lewis, taking his place on the November ballot and very likely inheriting the seat he occupied in Congress for 17 terms.

The decision came less than 72 hours after Mr. Lewis’s death, as much of Atlanta remained in grief over the loss of the civil rights leader who had represented the city for over 30 years, and as his colleagues in Congress held a moment of silence on Monday in his memory.

Democratic officials said they had to rush because of a deadline imposed by state law that required a name be put forward by Monday afternoon. Party leaders said they did not want to risk losing a seat that they have traditionally held in a tight grip, one representing a swath of Atlanta and adjoining suburbs.

Ms. Williams, who is also the chairwoman of the state party, was one of five finalists up for consideration, with that group winnowed from a pool of dozens who submitted applications over the weekend. She was selected by the party’s executive committee of 44 members during a virtual meeting on Monday. (Ms. Williams abstained from any votes related to the nomination.)

“It’s surreal that we’re forced to endure this nomination process while still grieving,” she said in her speech before the vote, noting that she considered Mr. Lewis to be a friend and mentor.

Ms. Williams and her supporters sought to cast her as the person best suited to carrying on Mr. Lewis’s legacy, saying that she would advance to Congress with the zeal fueled by years of activism and practical legislative experience. She noted another parallel: She and Mr. Lewis both grew up in rural Alabama, where she was raised by her grandparents in Smiths Station, a small town just over the Georgia state line.

“Nobody could possibly fill the shoes of Congressman Lewis, but his leadership and fighting spirit is needed now more than ever in this country,” Ms. Williams said. “We need someone who’s not afraid to put themselves on the line for their constituents in the same way Congressman Lewis taught us to. I would be honored if you chose me to be that person.”

The choice fell to the party leadership because Georgia’s primary elections were held last month. The seat will probably remain vacant until the winner of the November election is inaugurated in January. Gov. Brian Kemp, a Republican, has 10 days following Mr. Lewis’s death to call a special election; the governor has not announced a decision.

Critics within the Democratic Party, including Barrington D. Martin II, who had mounted a failed primary challenge to Mr. Lewis in June, assailed a closed process that allowed party leaders instead of voters to decide the nominee. Some had called for the committee to nominate a place holder who would resign the seat upon being sworn in, giving way to a special election in 2021, an idea that was ultimately rejected.

“Everyone is on notice from here on out,” Mr. Martin said in a post on Twitter. “It’s disgraceful to think that Congressman Lewis wanted the people to be heard and today they were not heard at all.”

Scott Hogan, the executive director of the state party, argued that they were hamstrung by the law and were forced to rely upon a “system that falls short of a full districtwide election to ensure that we have a strong Democratic nominee.”

“While this system was not perfect and we were forced to use what the secretary of state and Georgia law demands,” he added, “we know that we have the absolute best candidate in Nikema Williams who will fight hard for Georgians.”

The party put out a call for applicants on Saturday, just hours after it was announced on Friday that Mr. Lewis died at the age of 80. Officials said 131 people raised their hands to run to represent the district, which covers parts of Atlanta and seeps into suburban DeKalb and Clayton Counties.

Being the Democratic candidate in Georgia’s Fifth District is tantamount to a ticket to Congress: Mr. Lewis won with at least 70 percent of the vote in all but one of his re-election bids; Hillary Clinton won with 85 percent of the vote against President Trump in the district during the 2016 presidential race.

The process was overseen by a committee that includes some of the state’s most prominent Democrats, including Keisha Lance Bottoms, the Atlanta mayor who catapulted to national prominence in recent months after her response to unrest in the city and clashes with Governor Kemp over coronavirus precautions, and Stacey Abrams, who narrowly lost the race for governor in 2018 to Mr. Kemp.

The other finalists selected by the committee were Park Cannon, a state representative who became the youngest member of the Georgia General Assembly when she was sworn in at the age of 24 in 2016; Andre Dickens, who serves on the Atlanta City Council; Robert M. Franklin Jr., a scholar of theology and a former president of Morehouse College in Atlanta; and James Woodall, the president of the Georgia N.A.A.C.P. and, at 26, one of the youngest leaders in the organization.

Ms. Williams, 41, was elected in 2017 to a State Senate district that overlaps in large part with the Fifth Congressional District that Mr. Lewis represented.

She gained some national attention in 2018 when she was arrested in front of a pack of cameras during demonstrations at the State Capitol over the midterm elections. “I was not yelling,” she told reporters with her hands behind her back and state troopers tightening zip ties around her wrists. “I was not chanting. I was standing peacefully next to my constituents.”

Outside of the legislature, Ms. Williams was deputy political director for the National Domestic Workers Alliance, an advocacy group representing nannies, house cleaners and other care workers. Before that, she had been the vice president of public policy for Planned Parenthood Southeast.

Ms. Williams will face what is regarded as a long shot bid from the Republican nominee, Angela Stanton-King, a reality-television personality who was convicted of her role in a stolen-vehicle ring. Mr. Trump pardoned her in February. In a tweet on Monday afternoon, Ms. Stanton-King pointed out Ms. Williams’ ties to Planned Parenthood and underscored her opposition to abortion rights.

During the virtual meeting of Democratic leaders, many acknowledged a measure of awkwardness as a series of candidates gave speeches, actively campaigning for Mr. Lewis’s job so soon after his death. But in his speech, Mr. Franklin, the former Morehouse president, noted the gravity of the moment.

“History has its eyes on you,” he said, invoking a song from the musical “Hamilton.” “How do you follow the extraordinary legacy and the impact of Congressman John Robert Lewis?”

Still, he added, “You can’t make a bad decision today.”