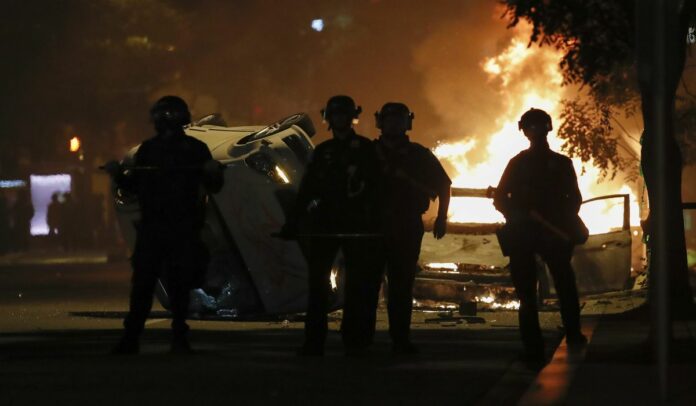 The federal government says it was arson. The protester charged with igniting a Molotov cocktail outside the District of Columbia police station during the recent race riots says it is protected First Amendment speech.

Jarrett Jeremy Pace, on the night he set the fire, had said on Facebook he wanted to “burn a 12 station to the ground!” The number “12” is street slang for police.

But now, Mr. Pace argues in federal district court he was speaking metaphorically, that he actually tossed the firebomb on the street near the Fourth District police station rather than at it, and that his action was not meant to burn the station but rather to express solidarity with George Floyd and protesters in Minneapolis.

“Ranging from inappropriate to deplorable, fire has historically been used as an expression of speech,” Eugene Ohm, Mr. Pace’s lawyer at the federal public defender’s office, wrote in briefs asking for his release.

On Wednesday alone, prosecutors announced charges against six men in New York, all accused of igniting fires aimed at government property in Rochester and Buffalo. Prosecutors in Seattle announced arson charges against a man they say set a fire outside a city police precinct there.

Mr. Pace was initially charged in superior court in the District but had the case sent to federal district court days later.

“I think it’s pretty clear why he’s elevated starting a fire on a street block to a federal crime,” said John David Betras, a lawyer in Ohio who has tracked some of the ongoing legal battles during the protests. “What the Justice Department is saying is ‘You want to protest, OK, we’re going to prosecute you federally.’”

According to police, as riots engulfed Minneapolis, including the burning of a police station there, Mr. Pace posted to Facebook early in the morning on May 29 that he wanted to bring that level of vitriol to Washington. He shared a map link to the Fourth District station, on Georgia Avenue Northwest.

Authorities say Mr. Pace filled a plastic laundry bottle with gasoline and filmed himself as he approached the station and lit a paper towel fuse stuck into the bottle. But he botched the setup and gasoline fumes escaped from the bottle and ignited, burning him and forcing him to drop the firebomb.

Police chased him down and arrested him.

While he was at the hospital being treated for burns, authorities say Mr. Pace told police he could have done worse and he justified his actions: “This is what you all deserve,” he told an officer guarding him.

His lawyers now say he never wanted to burn the building but intended to light a fire — at a distance — to express his anger.

And that, they say, is allowed under the First Amendment, as an expression of solidarity with Black Lives Matter and fringe leader Hawk Newsome, who urged supporters to “burn down this system and replace it.”

“While the words may make some uncomfortable, fire and burning are words that have become synonymous with a demand for systemic change in police practices,” Mr. Pace’s lawyers wrote.

They called the sidewalk plaza in front of the police station where the fire occurred a public forum where First Amendment protections apply, and they compared his attempt to burning a cross or a flag, both of which they said are protected expression.

They dismissed Mr. Pace’s extensive criminal record, saying “almost all” of the convictions were misdemeanors. And they pointed to his mental health problems, including bipolar disorder, post-traumatic stress disorder and attention deficit and hyperactivity disorder. The lawyers said he was unable to get his medications because of the coronavirus crisis.

Prosecutors say it’s tough to square Mr. Pace’s new claim that he only wanted to light a small fire on the sidewalk with his own remarks in his video and with the gallon of gasoline he had, which produced more than a small fire.

“More obviously, one need not fashion a bomb by stuffing a wick into a one- gallon container of gasoline in order to create a ‘small fire,’” wrote Assistant U.S. Attorney James B. Nelson.

Mr. Betras said the free speech defense will be a tough sell, since the government is arguing the fire itself is a violation of law, regardless of damage or intent.

“I don’t see how any successful First Amendment argument can be made,” he told The Washington Times. “They’re not saying you can’t set a fire because of this, they’re just saying no fires. Generally if it’s content neutral you’re not going to win that argument.”

Indeed, in a key ruling from 1968, the Supreme Court upheld a criminal prohibition on burning draft cards during the Vietnam war.

The high court ruled the Draft Card Mutilation Act of 1965, which banned mutilation, furthered an important government interest and wasn’t intended to chill speech, so it didn’t impinge on the First Amendment.

In Mr. Pace’s case, his fire-as-free speech defense has not yet succeeded.

A magistrate judge ordered Mr. Pace held pending without bond pending trial. Mr. Ohm, his lawyer, warned that given the coronavirus-influenced schedule, he may not get a trial until 2021.

Mr. Ohm did not respond to an inquiry from The Washington Times.

The Justice Department justified the federal charges by pointing to the gasoline, which prosecutors said traveled across state lines, and making threats on the internet, both of which made the offenses a matter of interstate commerce and subject to the jurisdiction of the federal government.

In a bizarre quirk, federal prosecutors erroneously filed their pretrial Pace document in another criminal case stemming from the protests.

That case involves Micah Avery, 26, who is accused of painting “Yall not tired yet?” on a pedestal on the steps of the Lincoln Memorial.

Mr. Avery was released on bail, and it’s not clear what his defense might be.

In Iowa, local prosecutors have slapped two BLM protesters with a charge of disseminating confidential police information. They say one protester pilfered a police bulletin with details of a lookout for protesters from the pocket of an officer, and another protester shared it with a local television reporter who aired video of the document.

“Those documents are not supposed to be shared. It’s actually written on them. As soon as they did that, the charge was appropriate,” Des Moines police spokesman Sgt. Paul Parizek told the Associated Press

In Cincinnati, protesters charged with violating the mayor’s imposed curfew have argued to the court that the curfew wasn’t legal because the city council wasn’t involved.

Nationwide, thousands of people — perhaps tens of thousands — were arrested for curfew violations. Some have begun to beat the charges.

In Philadelphia, Mayor Jim Kenney last week announced all curfew code violations during June would be waived. He said the demonstrators had turned out for a good cause — the Black Lives Matter movement — which excused their violations.

In Denver, protesters proposed a class-action lawsuit claiming some 350 curfew arrests were illegal and challenging the methods police used to disperse crowds, saying that using tear gas or flashbang grenades not only trampled on First Amendment rights but also increased risks of contracting the coronavirus during their time in custody.