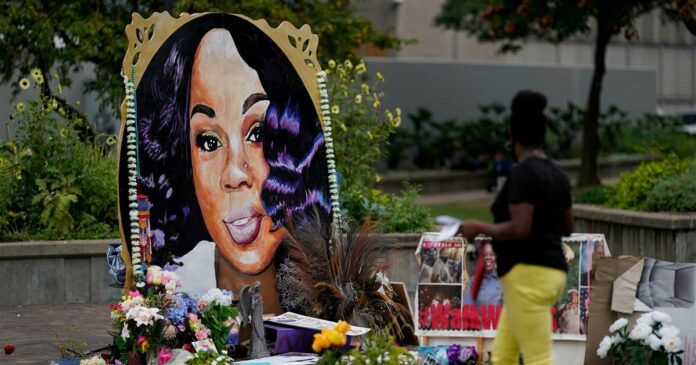 One of the police officers involved in the shooting death of Breonna Taylor in her Louisville home has been charged with first-degree wanton endangerment, a judge announced Wednesday.

Judge Annie O’Connell announced the charges against former Louisville police Sgt. Brett Hankison, who was fired in June, during a grand jury proceeding. A warrant will be issued for his arrest, O’Connell said.

The charges that were filed accuse Hankison of firing blindly into several apartments and recklessly endangering Taylor’s neighbors, but do not charge him with firing at or killing Taylor. Taylor’s family had called for nothing less than manslaughter charges.

Two other officers involved in the March 13 incident, Myles Cosgrove and Jonathan Mattingly, were not charged.

Ben Crump, an attorney for Taylor’s family, tweeted after the announcement, “Jefferson County Grand Jury indicts former ofc. Brett Hankison with 3 counts of Wanton Endangerment in 1st Degree for bullets that went into other apartments but NOTHING for the murder of Breonna Taylor. This is outrageous and offensive!”

Taylor, an emergency medical technician, was shot and killed in her home on March 13, after police officers with a no-knock warrant broke down her door seeking evidence in a narcotics investigation. The target of the probe did not live at the location.

Taylor’s boyfriend, Kenneth Walker, fired a shot at the front door, striking one officer in the leg, according to police. Walker, who had a license to carry firearms, said he believed it was a home invasion. Officers opened fire, hitting Taylor five times.

Kentucky Attorney General Daniel Cameron said at a news conference Wednesday that the officers did not serve the warrant as a no-knock warrant. He said officers both knocked and announced their presence, which Cameron said was corroborated by an independent witness. Other witnesses have said they did not hear police announce their presence.

“When officers were unable to get anyone to answer or open the door, the decision was made to open the door,” Cameron said. Mattingly then entered the residence and saw Taylor and Walker standing at the end of the hall. Cameron said Mattingly was holding a gun and fired.

Cameron said an FBI analysis determined that Cosgrove appears to have fired the fatal shot that hit Taylor and that there is no evidence that Hankison’s bullets hit Taylor.

“Our investigation found that Mattingly and Cosgrove were justified in their use of force after having been fired upon by Kenneth Walker,” Cameron said.

The fatal shooting of Taylor, a 26-year-old Black woman, during a police raid at her Louisville home in March has sparked months of protests. Ahead of Wednesday’s announcement, the city battened down in anticipation of possible unrest.

Federal buildings were closed to the public this week, with first-floor windows of the U.S. District Courthouse boarded up; barricades were placed downtown; and Louisville police declared a state of emergency.

Mayor Greg Fischer said at a news conference Wednesday that he was imposing a 72-hour curfew starting at 9 p.m.

“Our goal is ensuring space and opportunity for people to gather and express first amendment rights while maintaining public safety,” he said.

“We’re asking people to do their public protest during light. That’s the purpose of having the curfew. Most of the violence we’ve encountered over the past few months has occurred after dark.”

Hankison was fired in June for “wantonly and blindly” firing into Taylor’s apartment, according to his termination letter.

“It would have taken courage and integrity to calmly state: ‘We must wait until the investigations have been completed and the evidence is in hand before making any determinations regarding discipline,'” Louisville attorney David Leightty wrote in an appeal to the dismissal, according to The Courier Journal.

Two other officers, Myles Cosgrove and Jonathan Mattingly, who, like Hankison, fired their weapons during the raid, were placed on administrative leave.

Also placed on leave was Det. Joshua Jaynes, who applied for the warrant for the raid.

Cosgrove, Mattingly and Jaynes along with three other officers — detectives Tony James, Michael Campbell and Michael Nobles — are all currently under internal investigation by the police department’s Professional Standards Unit in connection with the incident, police said.

“This investigation is being conducted to determine whether any departmental policies were violated,” Jessie Halladay, the police chief’s special adviser, said in a statement Tuesday. “There is no specific timeline on when that investigation will be completed.”

The police probe is separate from the state attorney general’s investigation, which began in May. The FBI also announced in May that it was investigating the shooting.

Cameron was preparing earlier this month to present evidence to a grand jury to decide on possible indictments for the three officers who fired their weapons that night, two sources familiar with the matter told NBC News.

In audio of investigators’ interviews that was released in July, Mattingly, who led the late-night raid, insisted that officers knocked and announced themselves.

In Walker’s interview with investigators, however, he said that there was banging on the door but he and Taylor never heard anyone say “police,” according to the audio. Walker told the investigator that he and Taylor asked who it was and when they got no response, he reached for his firearm.

During the interviews by the Louisville Metro Police Department’s Public Integrity Unit, the investigator questioning Mattingly said officers’ use of a battering ram to break open the apartment door was “the most passive way in” to the apartment and said that Mattingly “rightfully” returned fire after Walker fired a shot.

Taylor’s mother filed a lawsuit against Hankison, Cosgrove and Mattingly, alleging that they did not announce themselves when they raided the home after midnight and engaged in “blindly firing” more than 20 shots into the apartment.

Taylor’s address had been listed on the police search warrant based on officers’ belief that a suspect, her ex-boyfriend, had used her home to keep drugs or stash money.

The wrongful-death complaint ended last week with Taylor’s family reaching a $12 million settlement with the city, the largest in Louisville’s history.

Ryan Nichols, president of the local police union, the River City Fraternal Order of Police Lodge 614, told local station WLKY that the settlement was premature as it came before the completion of the attorney general’s probe.

“Especially if the investigation shows the actions the police took were within the boundaries of the law and they didn’t violate anything, maybe that settlement doesn’t look the same,” he said.

Although the city admitted to no wrongdoing under terms of the settlement, Mayor Greg Fischer said the agreement was “an acknowledgment of the need for reform.”

The Louisville police union has not responded to repeated requests for comment on the case from NBC News.

While Taylor’s fatal shooting happened in mid-March, it didn’t gain much national attention until the family’s lawsuit was filed two months later.

Taylor’s death came 2 1/2 weeks after the fatal shooting of Ahmaud Arbery by civilians in Brunswick, Georgia, and 2 1/2 months ahead of the death of George Floyd while in police custody in Minneapolis.

The deaths sparked national protests that shined a harsh light on the nation’s long history of systemic racism, police brutality and the extrajudicial killings of Black Americans.