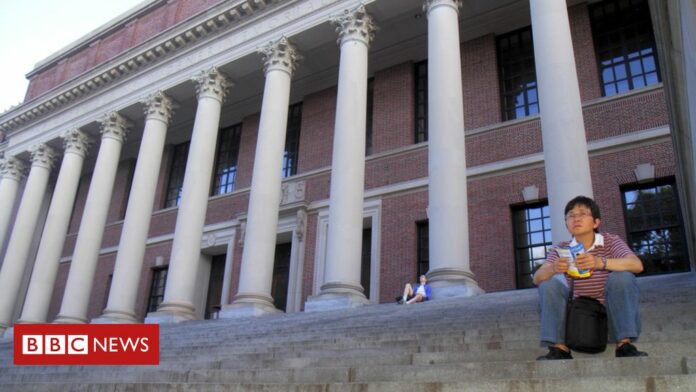 The spread of coronavirus has led to major changes for higher education across the world, with many institutions embracing virtual tuition as a way to allow students to continue their learning.

But US immigration authorities have now said that international students whose courses move fully online this autumn could face having their visas revoked.

An advisory said that unless students switch to courses with face-to-face tuition, they could be deported.

The decision has caused uncertainty and fear for the hundreds of thousands of international students who rely on student visas in the US.

The BBC spoke to some of those affected.

‘We came here with dreams’

“I was pretty shocked when the announcement came out. It’s just so sudden.

“Our school will be moving into complete online mode after Thanksgiving,” she explains. She is worried about the impact this change could have on her visa status.

“Many of my friends thought that they could take online classes for the fall and have already returned home. For those who are still here, we’re constantly keeping our eyes on the price of plane tickets.

“I think it’s just not practical for us to rush back and forth between our home country and the US. I really hope that the school will maybe give us one [in-person] class after Thanksgiving so we can stay in the US.

“I would really hope that ICE [US Immigration and Customs Enforcement] reconsider the policy. It’s affecting every single international student here in America. We paid huge amounts of money and came here with dreams. For those who cannot afford the plane tickets or whose home country has a closed border, they may face deportation.

“We are all so concerned.”

‘I woke up to this rule. I was so anxious’

Tanisha Mittal, 22, is from Mumbai in India and studying for a masters in health management and policy at the University of Michigan

“Like many other international students, I came back home to India right before the country went into lockdown. Everything has been online since then,” she says.

“I finally booked my ticket last week to go back to the US. I woke up to this rule the next day. I was so anxious. I wasn’t sure if I would be able to go back.

“I’m really scared that because of this confusing order I may be deported back when I arrive in the US. My flight is in 10 days, which makes the whole issue even more urgent for me.

“Everyone is grappling with so many questions at this point. If your university is going online you need to go back to your country and if it is hybrid [both online and in-person] you need to go back to the US. The whole concept of personal choice has been removed and we’re literally being compelled to do something that we may not want to do.

“With Covid-19, it’s also unsafe because people from different countries would come back to campus. So, the risk has increased. What if cases surge and universities go fully online again? Will they ask us to go back? Will our visas be revoked? “

‘My scholarship may be rejected’

Molly Canham, 18, is from Devon in the UK and has been offered a sports scholarship to study at Louisiana State University

“I live my life not knowing when I’ll be able to start university or start competing for my cross country team. I’ve been signed to run for the school, so potentially not being able to go there in August leaves me in fear that my scholarship may be rejected.

“I cannot gain access to a visa to get to the US, as the embassy is closed and most international students are being rejected.”

“I’m worried that my only option will be to take any course that has face-to-face time just so I can get there and maintain my sports scholarship.

“I’m also in contact with other athletes who are on a scholarship who either cannot get back into the US to study or are at risk of being deported back to England due to online course load.

“It makes me very anxious for the future as I do not want to be treated poorly and unfairly when I get to America. A lot of students I know are scared for the future at the moment.”

‘The US needs international students’

Dev Wadhwa, 19, is from Vadodara in India. He’s majoring in computer sciences at the University of Illinois Urbana-Champaign

“I had admission offers from Australia, Canada and Hong Kong but I chose the US because of the quality of education,” he says.

“After the order was announced, one of my friends messaged me and said: ‘You’re going to be kicked out of the US.’ I was shocked and frustrated. It felt like a bombshell dropping on top of you.

“For the first 24 hours it was really, really frustrating for everyone. No-one knew what it meant.”

Although he later found out that his programme would not be affected, he adds that the stress for students has been difficult.

“We’re already in the middle of a crisis. This was not really needed right now. It’s just sad because some students don’t have the option to go back to their home countries or to come back to the US because of travel restrictions. So all of this is even more anxiety-inducing for them.”

But Dev says he understands the decision.

“If you look at it from the point of view of the administration, if a university is completely online you don’t need to be in the US. It’s logical, I think. But then again, the US needs international students to work for them and to keep their universities going.”

‘Everyone was panicked and anxious’

Messages flooded into an online group for Chinese students at UCLA after the visa change was announced this week.

“Everyone was very panicked and anxious,” she says.

Her university offers an on-site and remote hybrid curriculum, but as a student in sociology and film, Yang may face difficulty enrolling in on-site classes as most of those currently offered are for courses in science and maths.

“In the worst-case scenario, I’ll have to return to China, but it’s a lot of hassle,” Nox says, citing skyrocketed flight fares and quarantine requirements.

She adds that the time difference and China’s internet censorship may lead to yet more hurdles for remote learning.

Iris Li, 20, is a junior student from China at Emory University in Atlanta but is currently in Beijing

Iris Li woke up to the news that she may not be able to renew her student visa, as she is taking only online classes from China.

The 20-year-old travelled back to her hometown of Beijing in late March, only packing for a summer break. But her plan has been disrupted since the Covid-19 outbreak unfolded in the US, where she has lived for six years.

Her visa appointment in early July was cancelled, as routine visa services in US embassies and consulates around the world remain suspended. Worse still, the ICE rule means she won’t be issued a new student visa if taking a fully online curriculum.