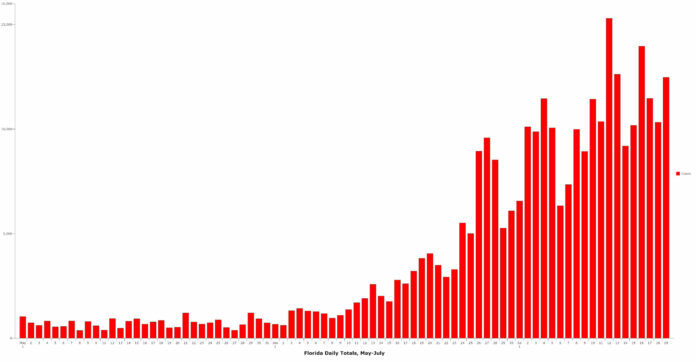 The Health Department reported on Sunday that Flagler County had 38 new cases of Covid-19 in a single day, exceeding by 12 the previous single-day record set only two days earlier. Flagler has seen 157 new cases in the last seven days, a quarter of its total since March and by far the most accelerated pace of new infections since the pandemic began, with a positivity rate of 10.6 percent.

Two more staffers at local assisted living facilities have tested positive–one at Gentle Care Assisted Living, a group home in the Woodlands neighborhood of Palm Coast, and one at Sabal Palms Assisted Living on Palm Harbor Parkway in PAll staffers at local assisted living and nursing home facilities are under a state mandate to test for Covid every two weeks.

Palm Coast has the bulk of Covid cases, with a cumulative 447 so far, Bunnell has 60, Flagler Beach 54 and Beverly Beach one. On Friday Flagler Health Department Chief Bob Snyder said there were 16 Covid-related hospitalizations at AdventHealth Palm Coast. Today the Agency for Health Care Administration reported overall bed capacity at the hospital at 23 percent, and ICU bed capacity at three out of 18 licensed beds. The hospital has capacity for expansion of ICU beds when needed, and can transfer patients out of the hospital to other hospitals in the region.

The state health department today reported 12,478 new cases in Florida, the fifth day in a row that the state has exceeded 10,000 cases, and the ninth in the last 10 days.

In just that time span, Florida has added 117,300 cases, a third of its cumulative total since the coronavirus pandemic began in late February. Aside from the United States, only Brazil and India have been seeing new infection numbers higher than Florida’s. In the same time span, 980 people have died of Covid-19 in Florida–87 more reported today–a fifth of the state’s total, which now stands at 5,091. Florida and California are expected to overtake New York as the states with the county’s highest number of cases in the coming week.

Nevertheless, Gov. Ron DeSantis, speaking at Flagler Hospital in St. Augustine on Saturday was again blaming “headlines” for lacking context and projecting fear. He downplayed the severity of the crisis in the state and patted himself on the back for working with the White House to get 30,000 remdesivir vials to Florida hospitals to help shorten hospital stays.

Schools in Florida are under state order to open five days a week for in-person instruction this fall, but several districts, including Volusia, Hillsborough, Palm Beach, Polk and Orange counties, among others. In Texas, state education officials backed down after a backlash from teachers, parents and health officials and allowed school districts to delay reopening by up to four weeks. California announced  last week that it would go to distance education until further notice.

Flagler is following a model similar to St. Johns, with options for in-school instruction or remote instruction starting Aug. 10, though the decision may change as local Covid numbers dictate.

On Saturday, the Centers for Disease Control published a new study that may have significant impact on schools reopening, as it points to older students being as infectious as adults.

It is the largest study yet analyzing Covid-19’s effects on school children, involving 59,073 contacts of 5,706 Covid patients who developed symptoms, in 10,592 South Korean households. The study found that the rate of infection for children in elementary school or younger–that is,children ages 0 to 9–is low, but not non-existent: it was 5.3 percent (younger children breathe in smaller quantities and stand closer to the ground, diminishing infectious capacities), though children in day care were found to be at high risk of transmitting the virus to household members. But children in middle and high school have a rate almost four times higher, at 18.6 percent, the study found.

“A contact survey in Wuhan and Shanghai, China, showed that school closure and social distancing significantly reduced the rate of COVID-19 among contacts of school-aged children,” the study reported. “The low detection rate for household contacts of preschool-aged children in South Korea might be attributable to social distancing during these periods. Yet, a recent report from Shenzhen, China, showed that the proportion of infected children increased during the outbreak from 2% to 13%, suggesting the importance of school closure.”

“Our observation has several limitations,” the study authors reported. “First, the number of cases might have been underestimated because all asymptomatic patients might not have been identified. In addition, detected cases could have resulted from exposure outside the household. Second, given the different thresholds for testing policy between households and nonhousehold contacts, we cannot assess the true difference in transmissibility between households and nonhouseholds. Comparing symptomatic Covid-19 patients of both groups would be more accurate. Despite these limitations, the sample size was large and representative of most Covid-19 patients early during the outbreak in South Korea. Our large-scale investigation showed that pattern of transmission was similar to those of other respiratory viruses (12). Although the detection rate for contacts of preschool-aged children was lower, young children may show higher attack rates when the school closure ends, contributing to community transmission of Covid-19.”

A note about the positivity rate: FlaglerLive from the beginning of the pandemic has relied only on the overall state report that reports only confirmed cases to the health department, which reflects a lower number of tests overall–though that’s the number the state is relying on as a measure of its overall testing efforts. County-by-county reports that show day-by-day tests and positive cases combine the more accurate PCR tests and antigen testing data, a rapid test with a higher chance of false negatives. Antigen numbers have been used to dilute the positivity rate. As covidtracking.com notes, “On July 1, the Florida Department of Health started mixing antigen test results with PCR test results and calculating an overall percent-positive rate using this commingled data. The state does not break out the number of each type of test reported. Because these tests perform differently and antigen tests are more likely to provide false negative results, these tests should not be combined in reports. They should also not be used to calculate the percent positivity, which is likely to be artificially lowered by the inclusion of a test with a greater percentage of false negatives. Antigen tests are also not considered to be “confirmatory” tests, so people with positive antigen tests alone don’t count as confirmed cases of COVID-19. In fact, they don’t even count as probable cases without additional epidemiological or clinical evidence. Antigen test totals and results should be provided separately.”