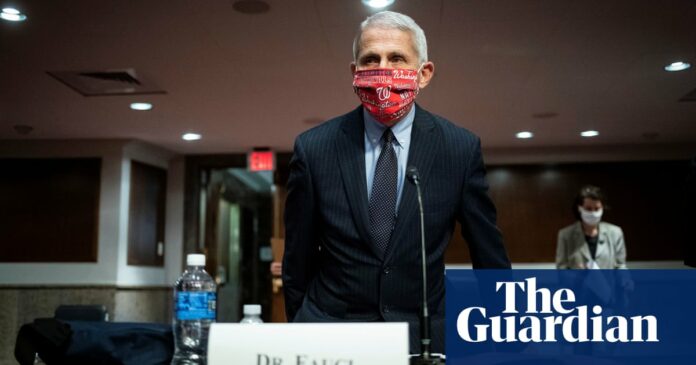 As the US set a world record for most Covid-19 cases in one day, with 60,000 reported on Wednesday, Dr Anthony Fauci, a senior member of the White House coronavirus taskforce, said states needed to pause reopening efforts.

“Rather than think in terms of reverting back down to a complete shutdown, I would think we need to get the states pausing in their opening process,” the director of the National Institute of Allergy and Infectious Diseases told the Hill.

Fauci’s comment represented a retreat from a remark made on a Wall Street Journal podcast on Wednesday, when he said “any state that is having a serious problem, that state should seriously look at shutting down” again.

Fauci has been attacked by Donald Trump and reportedly barred from major media appearances but he has found other ways to reach the American public, speaking to webcasts and in testimony before a Senate committee.

In remarks published by the Journal on Thursday and likely to anger the president, Fauci said the government needed to do better in making the case for personal responsibility and added: “We need to get people like myself, like my colleagues, out there more.”

Researchers at Johns Hopkins University in Maryland reported the record daily figure. According to the same source, the US has more than 3m confirmed coronavirus cases and more than 132,000 deaths.

States that sought to reopen from late May, Texas and Florida among them, are experiencing precipitous rises in cases and pressure on hospital resources. Arizona, another state experiencing a surge, has seen long queues for tests and claims minorities have been abandoned by state government. In Phoenix, city authorities have appealed for federal help.

In his remarks on Wednesday, Fauci also said it “wasn’t for me to say” which states should shut down and when, “because each state is different”. But a pattern is emerging. Texas, Florida and Arizona are run by Republican governors allied to the president. So is Oklahoma, where the Tulsa public health chief said on Wednesday a Trump rally there in June “likely contributed” to a dramatic surge in cases.

“In the past few days, we’ve seen almost 500 new cases, and we had several large events just over two weeks ago, so I guess we just connect the dots,” said Dr Bruce Dart, also referring to protests over the police killing of George Floyd, though those were outdoors where risk of transmission is lower.

On Thursday, the White House press secretary, Kayleigh McEnany, told reporters: “We have not seen data to reflect [Dart’s claims], and we do not regret holding the rally.”

Many observers charge that Trump has placed his re-election above the health and safety of millions. The president has also insisted Covid-19 will “disappear” and that 99% of cases are harmless. It has been reported that the White House wants to switch to telling the public the virus just has to be lived with.

The Republican party still intends to hold large events in Jacksonville, Florida, at the end of August, having switched most of its convention from Charlotte, North Carolina, where a Democratic governor insisted on tight measures against Covid-19. On Wednesday, Trump indicated the party might be “flexible” about going to Florida.

On Thursday morning, he complained on Twitter: “For the 1/100th [sic] time, the reason we show so many Cases, compared to other countries that haven’t done nearly as well as we have, is that our TESTING is much bigger and better. We have tested 40,000,000 people. If we did 20,000,000 instead, Cases would be half, etc. NOT REPORTED!”

Reporters and factcheckers have in fact repeatedly pointed out that such claims on testing are nonsensical and merely an attempt to deflect from rising case numbers.

Case numbers are also rising in states, New York and New Jersey prominent among them, which were hotspots but have introduced measures to reopen. Some such measures are now being paused. In California, Los Angeles is considering reinstating its stay-at-home order, Eric Garcetti, the mayor, said on Wednesday.

On Thursday, Andrew Cuomo, the governor of New York, retweeted a message lamenting a previous daily record. It said: “Yesterday the US hit a record high for new Covid cases. WEAR A MASK.”

Trump refuses to wear a mask in public and though Republicans from Vice-President Mike Pence down do and generally encourage the public to follow suit, the administration has refused to contemplate a national mandate. Tensions, often exacerbated by partisan politics, have flowered between governors and mayors who implement mask mandates or seek to do so.

Trump has also threatened to withdraw funding from public schools that do not reopen fully in September. New York City, the biggest such system in the US, will not do so. On Wednesday, the education secretary, Betsy DeVos, said Trump’s extraordinary threat, which would hit many of the neediest families in the country, could yet be carried out.

Trump has also pushed for federal guidelines on school reopening to be rewritten so, in the words of Pence, they will not be “too tough”. At the White House on Thursday, Trump insisted that in children “the immune system is so powerful, so strong”, and said: “We have to open our schools.”

Randi Weingarten, president of the American Federation of Teachers, told NBC: “Those of us who have spent our lives teaching kids are not going to take a risk with kids or with our members’ lives [but] if [teachers] had the proper safeguards, they want to be in classrooms.”

If schools reopen without necessary safeguards, Weingarten said, “we’re going to have a lot of [teachers] retire early, quit, take a leave. So, at the very same time that kids need these experienced teachers … we’re going to see a huge brain drain in the next few weeks.”