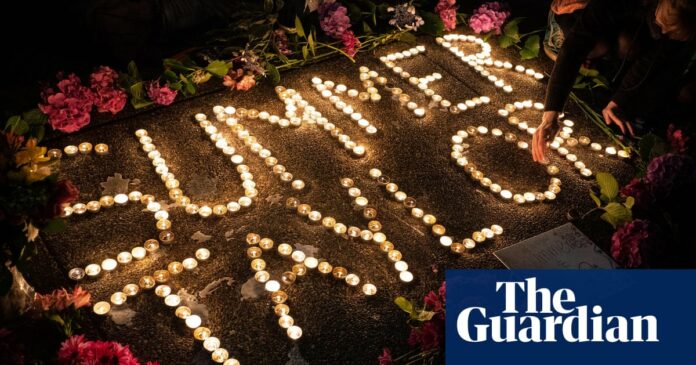 Sustained demonstrations across the US calling for racial justice and an end to police brutality in the wake of the May killing of George Floyd are being met with a rising trend for apparent counter-protesters using vehicles to threaten or slam into marchers.

Tension has also continued between protesters and police in some areas, with reports of law enforcement officers confronting crowds with flash-bang grenades and pepper spray.

In several US cities there has been a spate of people driving into protesters, with reports of multiple injuries and at least one death.

A truck was witnessed accelerating towards a small crowd demonstrating in Newton, near Boston, Massachusetts, on Tuesday.

“It was horrifying,” Rachel Alpert-Wisnia, a 16-year-old high school student, told the local outlet WCVB, after a man in a truck reportedly revved his engine and beeped before speeding toward the crowd.

Alpert-Wisnia was one of the organizers of the Black Lives Matter action, a protest group of mostly teens. In two videos shared online, a truck can be seen rushing toward the students as they fled to a driveway nearby.

New York police department officials confirmed they had detained a man who drove through a Black Lives Matter protest near Times Square in Manhattan on Tuesday night. The driver pulled on to the street after demonstrators first attempted to stop his car as they marched or cycled along.

No one was injured or arrested in the incident. The driver was later released by NYPD officers. According to authorities, protesters pushed their bikes under the SUV, and the vehicle rolled over them.

These are the latest of several incidents involving drivers endangering protesters in recent days. Elsewhere in New York state, Suffolk county officials confirmed they arrested a driver who hit two demonstrators taking part in a Black Lives Matter protest on Monday. The man initially sped away but was caught soon after and charged with third-degree assault.

“His charges need to be raised to at least a felony,” Jeremiah Bennett, 26, said in an interview. Bennett was one of two victims who were rushed to a nearby hospital with non life-threatening injuries.

Earlier this week, a Seattle man was arrested and is under investigation for vehicular assault after driving his car on to a freeway that had been blocked by protesters.

Witnesses reported that he swerved around makeshift roadblocks before hitting a panicked crowd of young activists.

Summer Taylor, 24, of Seattle, died and Diaz Love, 32, of Portland, Oregon, was seriously injured on Interstate 5 early on Sunday.

Taylor’s mother, Dalia Taylor, talked at a press conference on Wednesday about Summer’s love, empathy, and dedication to fighting for people’s rights.

“Even in death, we want Summer’s passion as an ally to continue lifting up Black lives in Seattle and all over our country,” Taylor said.

A detective, Mike Brown, in the King’s county sheriff’s office in Washington state has since been placed on leave and an investigation opened into reports that he posted on social media mocking the two activists who were hit.

The detective is a cousin of Washington Democratic governor Jay Inslee, known nationally for his work on the climate crisis and making that a central theme of his now-ended 2020 run for the presidency.

The driver of the car on I-5, Dawit Kelete, is in custody and a judge on Monday set a $1.2m bail.

There have also been instances of police patrol vehicles driving into protesters during the initial protests that broke out in the days after George Floyd, an African American man living in Minneapolis, was killed by a white police officer who kneeled on his neck.

And in an infamous 2017 case, the campaigner Heather Heyer was killed and numerous people badly injured in Charlottesville, Virginia, when those protesting a rightwing, white nationalist rally were crushed or thrown into the air after neo-Nazi sympathizer James Fields drove into them.

Last month a report from the University of Chicago’s Project on Security and Threats concluded that rightwing extremists were behind at least 50 vehicle-ramming incidents since the latest waves of protests began in late May.

At least 18 were categorized as deliberate while another two dozen were considered unclear as to motivation, or were still under investigation.

“The message they’re trying to send is, ‘You need to get out of the street and stop these protests,’” Ari Weil, a terrorism researcher and the report’s author, told NPR.

At least 20 people face prosecution for the attempted assaults, including a state leader of the Virginia Ku Klux Klan and other white supremacists. One California man was charged with attempted murder after antagonizing protesters and then driving into them, striking a teenage girl.

Donald Trump has balked at any associations between agitators and his base but has been accused of stoking racial division, especially in speeches over the Fourth of July long weekend.

He has called a proposed Black Lives Matter mural outside Trump Tower in New York City a “symbol of hate”.

Press secretary Kayleigh McEnany later attempted to clarify that the president was directing his remarks toward the organization and not protesters.

But an investigation by the Intercept found the Trump campaign falsely portrayed Black Lives Matter protesters who acted legally to stop a looter threatening violence as dangerous thugs plotting to “unleash a wave of violent crime in our cities” in two separate ads.

Meanwhile officers clashed with protesters outside the White House on Tuesday night after marchers gathered from different parts of Washington DC. Online, protesters shared videos of officers detaining organizers. According to WJLA, as many as eight were arrested but were later released by early Wednesday.

And tensions escalated between activists and law enforcement officials across the country, with clashes reported in states including Georgia, Washington, Oregon and Maryland.