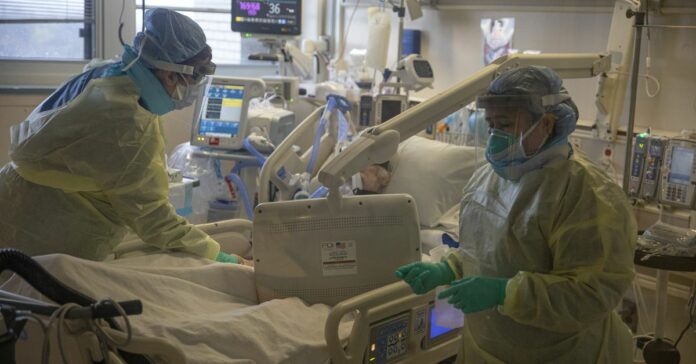 In early March, most doctors in the United States had never seen a person sick with COVID-19. Four months later, nearly every emergency room and intensive care physician in the country is intimately familiar with the disease. In that time, they’ve learned a lot about how best to treat patients. But in some cases, they’re still taking the same approach they did in the spring.

“There’s so much that’s different, and so much that’s the same,” says Megan Ranney, an emergency physician and associate professor at the Brown University Department of Emergency Medicine.

For the first few months of the pandemic, recommendations for every incremental decision made in a hospital were changing faster than they ever have before. “You almost couldn’t keep up — from one day to the next, your practice would change and your protocols would change. It was really disorienting for doctors and nurses,” Ranney says.

Information spread between colleagues, through medical education blogs and podcasts, and on social media. Doctors talked about new research on Twitter and shared new strategies in Facebook groups and on WhatsApp. If a suggestion that floated by a doctor in a Facebook group was low-risk and seemed like it might be helpful, it could be put into practice immediately. “If it’s a small change, they could start using it the next day,” she says.

That’s how the now-common practice of asking patients with COVID-19 to flip onto their stomachs spread: through word-of-mouth and on social media. When someone is on their back, their organs squish their lungs and make it harder for their airways to fully expand. When someone is on their stomach, their lungs have more room to fill up with air. The advice started circulating through the medical community before there was a formal, published study on the practice.

Testing it out wouldn’t have many downsides (it wasn’t dangerous to patients), and it was easy to do. “There’s this possibility that it could be positive, and there were a lot of stories about it having a positive effect,” Ranney says. “So, it spread in a much more organic and quick way, because it was something that we could do, but we weren’t worried it would hurt patients.”

Doctors like Seth Trueger, an assistant professor of emergency medicine at Northwestern University, saw the position help patients get enough oxygen to avoid needing a ventilator. “I started jokingly call it ‘tummy time,’” he says. Studies are starting to validate those observations, finding that patients who spent time on their stomachs were, in fact, better off.

Since March, physicians have also figured out other ways to help severely ill patients avoid ventilation. “We appreciate that it’s probably not a great thing for these patients, and we’ve developed other ways to get people high levels of oxygen,” says James Hudspeth, the COVID response inpatient floor lead at Boston Medical Center. For example, doctors are turning to nasal cannulas, which are noninvasive prongs that blow oxygen into the nose, before a ventilator.

They have better medications for hospitalized patients now, too. Since March, doctors have cycled through a few different options — like hydroxychloroquine, which turned out not to be effective. Now, they’re primarily using remdesivir, and antiviral drug that appears to help COVID-19 patients recover more quickly, and the steroid dexamethasone, which helps improve the survival rate for patients on ventilators. “Many intensive care units and many hospitals have created their own standard order sets, or standard therapies, for people with COVID-19,” Ranney says. Those shift as new evidence comes out around different medications.

That’s not unusual, Ranney says. Hospitals regularly change the drugs they use for conditions like flu and pneumonia as new data comes out. “What’s unusual is to change practice so quickly,” she says. “That’s just the reality of a global pandemic, with a disease we’ve never seen before.”

Most of the changes in doctors’ strategies over the past few months have been in patients who are severely ill. If someone is sick enough to be hospitalized with COVID-19 but doesn’t need to be in intensive care, there still isn’t much doctors can do for them. They’ll get fluids to make sure they stay hydrated and are given oxygen if they need it. Doctors will try to keep their fever down and monitor them to see if they get sicker, but that’s about it.

“It’s just those basic things,” Ranney says. Doctors now are more vigilant to the threat from blood clots, which have appeared in many COVID-19 patients over the past months. Because testing is more available in hospitals than it was earlier this year, they’ll also confirm that a moderately ill patient actually does have COVID-19 — and avoid giving them unnecessary treatments. But active interventions for patients with less severe symptoms are still around the same as they were back in March. “We’re still kind of in this watchful waiting,” she says.

One lingering question, Hudspeth says, is figuring out how to keep those moderately ill patients from becoming severely ill. Steroids may be helpful earlier on, he says, as could artificial antibody treatments that block the virus, though those strategies are still under investigation. “Part the challenge we face at the present moment is that the moderate patients are often where we would want to intervene,” he says.

Changes to treatment strategies for patients who are not severely sick have been harder to come by — in part because it’s riskier to try something new in that group. If someone isn’t dangerously sick, there isn’t as much to gain from using an experimental treatment that may have a chance of causing harm, so doctors are less likely to take risks. “We’re more likely to try stuff with sicker patients,” Ranney says. “And their families are more likely to consent to a clinical trial.”

Despite the open issues around COVID-19 treatments, the rate of new information is slowing down. Doctors aren’t shifting their practices as quickly as they were back in March and April, and Trueger says he thinks the next few months may be relatively stable. Doctors might get new information about which medications are more or less helpful, but other common best practices might be more entrenched. “I don’t think things are going to change as rapidly as the changes we had up front, when we were really flying half blind,” he says.