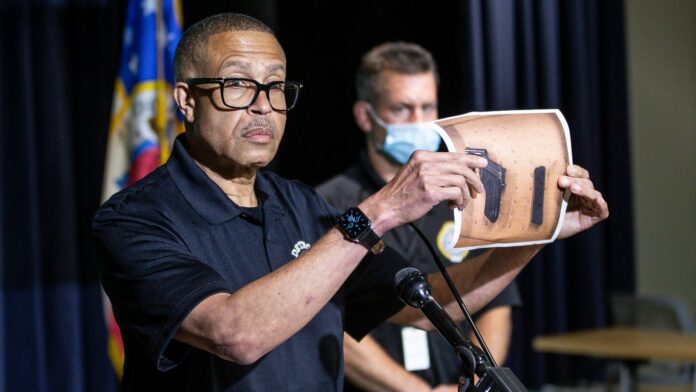 WARNING: This video contains graphic violence, and has not been edited by the Free Press. Chief James Craig says this video proves his officers were justified in fatally shooting a man who fired on them at close range.

Within hours of Detroit police fatally shooting a man, the police department released a video of the incident that shows a male pulling a gun out of his pocket, pointing it at the head of a police officer and opening fire.

Three nearby officers quickly fired back. The man went down before a police officer secured him to the ground.  He was pronounced dead shortly after.

Mayhem quickly followed in the west-side neighborhood of San Juan near McNichols, with more than 100 protesters gathering in the streets, shouting at police in riot gear, throwing bottles and bricks, and demanding justice for what they believed was another case of police brutality against a Black man.

Mayor Mike Duggan said the video did just that.

“Public confidence requires citizens to be able to judge for themselves the actions of our officers. The video is clear that the officer was suddenly and unexpectedly fired upon. I commend Chief Craig for moving so quickly to release the video publicly,” Duggan said.

The victim is Hakim Littleton, 20, of Detroit, who according to Craig and court records was out on probation stemming from a 2017 unarmed robbery and felony firearm conviction  Court records show he was initially charged with armed robbery, but cut a deal in the case and pleaded guilty to a lesser charge that got him three years probation. He was scheduled to be released from probation in 2021.

According to Craig, the shooting happened while officers from the 12th Precinct and a gang intelligence unit were investigating a July 5th shooting at a block party that left three people dead. On Friday, the officers had pulled into an area near San Juan and McNichols to arrest a suspect wanted on a separate felony drug warrant — and with alleged ties to the July 5  shooting — when they came upon a man with a gun.

According to dashcam and bodycam video released by police, here’s what happened:

The video opens with scout cars near a curb. An individual in a white T-shirt is on a sidewalk and puts his hands up. That’s Darnelle Sylvester, who was wanted on a felony drug warrant by the DEA, the Chief said. He shows no resistance as he is placed in handcuffs.

Nearby a man in an orange T-shirt, who police identified as Littleton, walks by, stops and pulls out a gun.

“Littleton said ‘you are not going to take my man,’; in other words take him into custody,” Craig said.

The video shows Littleton raise the gun in his left hand, fire twice at a nearby officer, then start to run. He is pursued by that nearest officer, who does not return fire.

Investigators found two shell casings where the suspect turned and fired twice, two more where he fell, the police said.

Craig called the officer who pursued the man a hero, noting he didn’t have his gun out but gave chase anyway to stop the man and protect everyone else.

“It’s simply a miracle that he wasn’t struck in the head,” Craig said of the officer. “This officer was a hero, despite being fired upon, he clearly wanted to stop the suspect even while putting himself in direct harms way.”

Craig said he wanted to get the video out “as quickly as I could.”

“It’s important to get the facts right,”  said Craig, who took issue with demonstrators who accused the police of killing a man without getting all the facts.

“It’s always tragic when a police officer has to use force,” Craig said. But, he stressed: “This knee-jerk reaction to not knowing facts is a problem … It’s to incite others.”

Craig said social media posters had dramatically misled the public, causing him to release the videos quickly to quell rumors.

Within hours of the shooting,  Craig said, numerous protesters converged on the scene of Littleton’s shooting, “saying he was unarmed, saying he was executed, saying he was shot 16 times. That was all so untrue … I know we’re in a very difficult time, here and across the country ….

Residents in the area confront Detroit Police officers after the shooting death of a man on West McNichols Road at San Juan Drive in Detroit.

“We needed to get the facts out.”

Craig said that police explained to Littleton’s family what happened and that they accepted it. “They weren’t happy,” Craig said, “but they believed what we said, and I greatly appreciate that.”

When asked what Littleton’s motive was for pulling a gun on police, Craig said:  “When Mr. Littleton was walking in the opposite direction, he heard that his friend was being detained, then he walked toward the officers. Some comments were made. He was angry about his friend being arrested, and that’s when he pulled out his weapon.”

Late Friday evening,  Wendell Anthony, president of the Detroit NAACP branch, called Littleton’s death “heartbreaking” and urged the community and law enforcement to find common ground. He said the case highlights the value of bodycams and dashcams in assessing police incidents and helping “dispel and explain situations that could possibly lead to deep division and even conflict.”

“This is a very challenging time in the history of police and community relations throughout our nation,” Anthony said in a statement. “It must be noted that even in this situation, what could have been an over-reaction was toned down and peacefully concluded on both the part of the police and the community protesting what some thought was an injustice. This situation could have gotten well out of hand. A disaster was avoided.”