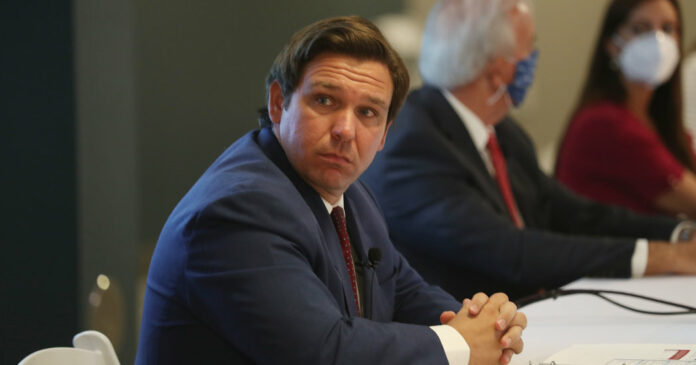 WASHINGTON — When President Trump first threatened to pull the Republican National Convention out of Charlotte, N.C., Gov. Ron DeSantis of Florida started campaigning to bring the event to his state.

But now, as convention planners in Jacksonville seek to raise tens of millions of dollars on an almost impossibly rushed time frame, and in the middle of a raging pandemic, the governor is hindering those efforts, interviews show.

Mr. DeSantis, a Republican, has directed his top fund-raiser, Heather Barker, to tell donors not to give to the convention because of a personal dispute between the governor and Susie Wiles, his former campaign manager who is serving as an informal adviser to the convention planners, according to multiple people familiar with his actions.

Ms. Wiles is a veteran Republican operative who led Mr. Trump’s Florida team in 2016 and who ran Mr. DeSantis’s 2018 campaign for governor. Mr. DeSantis’s relationship with Ms. Wiles soured over his suspicion that she had leaked embarrassing information.

Ms. Wiles, who lives in Jacksonville, rejoined the Trump campaign as an unpaid adviser last week, as the president’s poll numbers in Florida, the country’s biggest battleground state, have slipped and as he has sought to recreate his winning team from four years ago.

Ms. Barker, the top DeSantis fund-raiser, has been explicit with donors in Florida that the governor will not be helpful with rounding up money for the convention because of the involvement of Ms. Wiles, according to the people familiar with the conversations. In a phone call with Mr. Trump about whether to involve Ms. Wiles in the convention planning, Mr. DeSantis also told the president that she was overrated as an operative and that she had little to do with Mr. Trump’s 2016 victory in the state, a person familiar with the discussion said. Mr. Trump did not respond, and changed the subject.

In an interview on Wednesday, Ms. Barker denied any attempt to undercut the convention, or to encourage people to withhold support. “We are encouraging all people to participate and we hope it’s a success for the president,” Ms. Barker said. “We just hope everything is a success and want it to be, however they want to structure things and put things together.”

The threat of the governor’s working to undermine convention fund-raising at first caused alarm among members of the Jacksonville host committee, who described efforts to raise money as particularly challenging because of the uncertainty caused by a surge in new coronavirus cases. Florida Republicans are now under pressure to raise tens of millions of dollars in the next five weeks to help finance the three-day convention.

In Florida, and in most states, the governor is the de facto head of the party and its fund-raising efforts. The governor’s threat to hold up resources in his own state was seen by Republican officials as a stunning act of political pettiness by Mr. DeSantis, who had campaigned to bring the convention to Florida, aiming to celebrate a president whose backing elevated him to his current position.

Mr. Trump’s endorsement of Mr. DeSantis, then a congressman and a fixture on Fox News, catapulted him to victory in the 2018 Republican primary. The president, who will travel to Florida for a fund-raiser on Friday, also forcefully backed Mr. DeSantis in the general election in which he scored a narrow victory over Andrew Gillum.

People involved in the fund-raising process said that the money for the convention was mostly coming from national donors, not donors from Florida, and that Mr. DeSantis’s antipathy was having no noticeable impact on fund-raising. The acrimony underscores how in a state where the Republican Party has been in power for so long, the political feuds are no longer with Democrats but with each other.

“Susie was a key player in 2016,” said Kellyanne Conway, counselor to the president and his former campaign manager. “We leaned on her to help us win Florida. She remains well-liked and well-respected by the president, who has made clear he wants to ‘get the band back together.’ In addition to that, she was chief of staff, or played a leadership role, for two former mayors of Jacksonville.”

Brian Ballard, the top Republican lobbyist in Florida and one of the party’s major fund-raisers, said Mr. DeSantis had been supportive of the convention. “We have not asked him to take time to make fund-raising calls,” he said. “It wouldn’t be appropriate, with all the health issues, to distract from what he’s working on. Anyone who tries to lay some implications on that is absolutely not aware of the facts.”

The feud between Mr. DeSantis and Ms. Wiles first erupted in September, after a leaked internal memo from the governor’s political committee suggested he could elevate his profile and raise funds for himself by charging lobbyists for access, including $25,000 for a round of golf with him. Mr. DeSantis’s tight inner circle blamed the leak on Ms. Wiles, who led the committee, an accusation people close to Ms. Wiles considered unfounded and unfair.

The governor’s two closest advisers — his wife, Casey DeSantis, and his chief of staff, Shane Strum — had already soured on Ms. Wiles earlier in 2019. Too many operatives for the state’s Republican Party were seen as Wiles loyalists. The DeSantis camp helped push out the party’s executive director and install Peter O’Rourke, Mr. Trump’s former veterans affairs secretary. (Mr. O’Rourke resigned from the party post in March.)

After the leaked memo, Mr. DeSantis, who in his three terms in Congress was known for cycling through political staff members, cut ties with Ms. Wiles and forced her ouster from the Trump campaign, to the alarm of many Florida Republicans who believed she provided proven political chops in the state. Ms. Wiles swooped in to turn around Mr. DeSantis’s 2018 campaign after his previous team made a series of early mistakes. She was also executive director of the governor’s transition.

Ms. Wiles said last fall that she was stepping away from her political roles and lobbying work with Ballard Partners to deal with health issues. Several Republicans predicted at the time that she would return if Mr. Trump’s poll numbers in Florida began to flag. The campaign announced her return on Twitter last week.

Mr. DeSantis pitched Florida hard as an alternative convention host when the state appeared to have the virus under control in May and early June. He had suggested Orlando or Miami as host cities. But Orlando had the problem of an oppositional local mayor, Jerry L. Demings of Orange County. Mr. Demings, a Democrat, is the husband of Representative Val Demings, who is being vetted by the campaign of former Vice President Joseph R. Biden Jr. as a potential running mate. Miami has been the center of the state’s coronavirus outbreak.

In contrast, Jacksonville had a supportive Republican mayor and an easy permitting structure in a city that owns almost all of its own facilities. For people involved in the convention planning — everyone except Mr. DeSantis — the fact that it was Ms. Wiles’s hometown was also a plus, because she would be available to help the city make the convention arrangements.