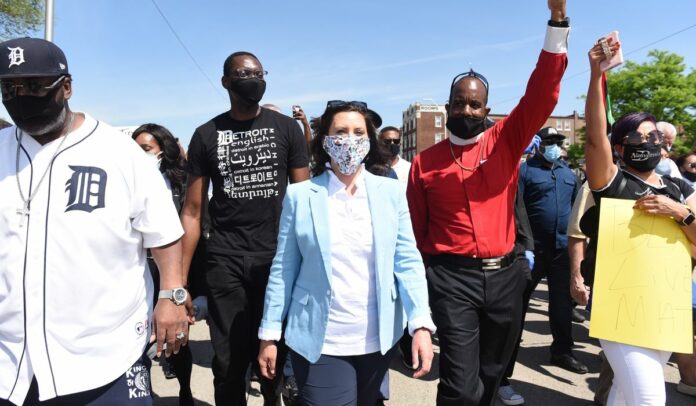 For three weeks, Seattle officials allowed hundreds of protesters to take over a six-block area of Capitol Hill that included Cal Anderson Park, but Shella Sadovnik still isn’t allowed to take her child to the local playground.

“Apparently, my toddler is much more dangerous [than protesters],” said Ms. Sadovnik, a Seattle-based lawyer for the Freedom Foundation. “I guess all the law-abiding people have to be subject to all these restrictions, but if you’re protesting and looting and rioting, that’s OK, you don’t spread coronavirus.”

The mass protests after George Floyd’s death at the hands of Minneapolis police have largely faded, but nobody’s forgotten how scores of mostly liberal governors and local officials cheered and even marched alongside demonstrators, often in defiance of social-distancing rules designed to slow the spread of the pandemic.

The result has been simmering public skepticism, particularly on the right, over the necessity of the lockdowns and other restrictions, or what Dr. Joseph A. Ladapo, an associate professor at UCLA’s Geffen School of Medicine, called the “the coronavirus credibility gap.”

Phil Kerpen, president of the free-market advocacy group American Commitment, pointed to the rapid-fire shift in focus by politicians and public health authorities from COVID-19 to the George Floyd protests and then back to COVID-19.

“The same supposed so-called experts who tried every scare tactic in the world to say that if you take a step outside, you’re going to kill everybody’s grandparents, and all of these draconian restrictions are necessary — they then went and literally participated in protest events with massive, massive crowds of thousands of people,” Mr. Kerpen said.

Governors of states with some of the tightest restrictions, including Democrats Phil Murphy of New Jersey, Gretchen Whitmer of Michigan and Tom Wolf of Pennsylvania, joined the protests in early June, wearing masks but not always social distancing, as shown in photos.

“With little social distancing, Whitmer marches with protesters,” said a June 4 headline in the Detroit News.

Democrats have swung back by citing the First Amendment rights of Black Lives Matter demonstrators and stressing the importance of the issues behind the protests spurred by Floyd’s May 25 death in Minneapolis police custody.

So did more than 1,200 public health experts, doctors and activists in a May 30 letter urging authorities to support the protests, saying that “[w]hite supremacy is a lethal public health issue.”

The letter also condemned the earlier anti-lockdown rallies by “predominantly white protesters” in Lansing, Michigan, saying that experts “must be clear and consistent in prioritizing an anti-racist message.”

Many of the peaceful protesters could be seen wearing masks, as did the not-so-peaceful rioters, some of whom were affiliated with antifa, whose activists routinely cover their faces to avoid being identified.

Mr. Kerpen wasn’t convinced. “They defended it on the basis that their political objections were more important than the public health claims they had been making about everyone else just moments before,” he said. “And then when that story fizzled and was no longer on the front page, they went right back to the same draconian demands, as if it hadn’t even happened.”
‘Preferential treatment’

The alleged double-standard has emerged as an issue in litigation. The Alliance Defending Freedom (ADF) brought up Nevada Gov. Steve’s Sisolak’s participation in a June 19 Black Lives Matter protest in a challenge to the Democrat’s reopening order on churches.

Under the order, churches cannot hold services with more than 50 attendees even though restaurants, casinos and theme parks have been allowed to reopen at 50% capacity, which the ADF described as a disparate treatment.

“What’s funny about all this is that we have a First Amendment right under the free-exercise clause to practice our religion in churches,” said ADF senior counsel John Bursch. “The Constitution does not protect your right to gamble at a casino, to eat at a restaurant, to frolic at a theme park, and yet those are the activities that are being given preferential treatment under the governor’s order.”

A federal judge in Las Vegas rejected the request for an injunction, noting in a June 23 ruling that the state gambling authority had imposed even stricter rules on casinos by requiring gamblers to wear masks, undercutting the church’s “selective enforcement” argument.

“Plaintiff’s requested relief would require the court to engage in potentially daily or weekly decisions about public health measures that have traditionally been left to state officials and state agencies with expertise in this area,” U.S. District Judge Richard Boulware II said.

The U.S. Court of Appeals for the 9th Circuit upheld the ruling, prompting the ADF to file Wednesday an emergency application with the Supreme Court on behalf of Calvary Chapel Dayton Valley, which pointed to the governor’s attendance at an “unlawful protest” in Carson City.

“The governor has not only allowed but participated in protest marches in recent days where thousands of people were getting together in close proximity without distancing, without masks, and he didn’t seem to have any problem with that, either,” said Mr. Bursch. “You put all that together, and it certainly does start to feel like churches are being intentionally singled out for mistreatment.”

A photo of the rally showed the governor wore a face mask, although others at the protest did not.

“I think these are peaceful folks who are just speaking their mind,” Mr. Sisolak said in the CarsonNow. “This is important to them. It’s encouraging to see the young generation participating so I’m thrilled to come and say hi to them.”

In Washington, Ms. Sadovnik said her organization, the Freedom Foundation, has been working overtime to represent businesses and individuals challenging the state’s restrictions.

The foundationn filed a lawsuit against Washington Gov. Jay Inslee’s “no mask, no service” order on Tuesday, the same day the mandate went into effect, arguing that the state is “essentially compelling [residents] to support junk science in violation of their freedom of conscience.”

The lawsuit cited a May 21 study in the New England Journal of Medicine that said wearing cloth masks outside a health-care facility “offers little, if any, protection from infection,” while the Democratic governor argued that the mandate would protect public health.

“This is something that can save lives,” Mr. Inslee said. “There is nothing in the constitution that says people should die of a virus. It’s just not there. And anybody can file a lawsuit, but so far courts have upheld.”

Aaron Withe, national director of the Freedom Foundation, said the order was particularly galling given Mr. Inslee’s treatment of protesters and rioters.

“The face-covering directive is the definition of government overreach,” said Mr. Withe. “If people choose to wear a mask, that’s their choice. But Inslee is going after otherwise law-abiding citizens when there are rioters destroying Washington cities such as Seattle with no punishment in sight.”

⦁ This article is based in part on wire service reports.