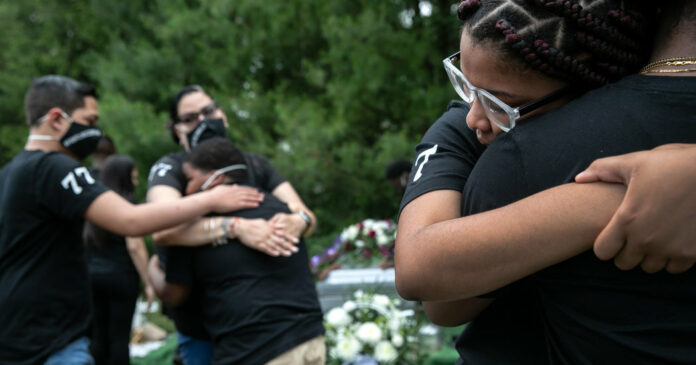 The daily number of deaths from the coronavirus has risen recently in some of the nation’s most populous states, signaling a possible end to months of declining death totals nationally.

In Texas, officials announced 119 deaths on Wednesday, surpassing a daily record for deaths in the pandemic that the state had set only a day earlier. In Arizona, more than 200 deaths have been announced already this week, and the daily virus death toll in the state reached higher than ever. Mississippi, Florida and Tennessee also set single-day death records this week.

The seven-day death average in the United States reached 608 on Thursday, up from 471 earlier in July, but still a fraction of the more than 2,200 deaths the country averaged each day in mid-April, when the situation in the Northeast was at its worst.

Health experts cautioned that it was too early to predict a continuing trend from only a few days of data. But the rising pace of deaths in the Sunbelt followed weeks of mounting cases in the region and suggested an end to the country’s nearly three-month period of declines in daily counts of virus deaths.

That steadily downward trend in daily deaths began in April after states instituted stay-at-home orders and it continued through June after states reopened their economies. The decline had continued over the past month even as cases of the virus skyrocketed in the South and West.

Deaths occur weeks after infections, so any rise in deaths would be expected to come later than a rise in cases. But public health experts said the diverging trends — newly rising cases but still declining daily deaths — had occurred largely because the new surge of virus cases also involved many younger and healthier people, who experts said were less likely to become seriously ill or die. Still, many experts predicted that the declining death tolls were unlikely to last as the virus continued spreading, passing from younger people to older people and those who are more vulnerable to the most dire effects of the virus.

“We’ve always said the deaths are going to be coming soon enough and now they are,” Dr. Peter Jay Hotez, dean of the National School of Tropical Medicine at Baylor College of Medicine, said. The age range of those who have died in recent days was not yet clear nationwide, though health officials in some communities said they were continuing to mainly see deaths among older people.

Dr. David Lakey, a former commissioner of the Texas Department of State Health Services and a member of a coronavirus task force created by the Texas Medical Association, said it was too early to tell if this week’s rise in the daily death toll in Texas should be seen as a sustained trend.

He said that reporting delays by officials over the July Fourth weekend might have contributed to an appearance of elevated numbers of deaths in Texas this week. But he also noted that hospitals in the state were filling quickly, a sign that there were a growing number of seriously ill patients.

Some officials in Texas predicted that this week’s higher death toll would prove to be the start of a far larger trend. Dallas County, home to about 2.6 million residents, saw a rise in recent weeks in the number of young people infected and hospitalized. The coronavirus has already become the third leading cause of death in Dallas, after cancer and heart disease. So far, about 436 people have died in the county since the pandemic began, according to data collected by The New York Times, but public health officials were bracing for a substantial increase.

“We have the highest number of Covid-19 hospitalizations to date, with a 24 percent increase since July 1,” said Judge Clay Jenkins, Dallas County’s chief executive, who is responsible for issuing health and safety orders to combat the outbreak. “Deaths are the most lagging indicator of the virus so we won’t see any correlation with our current high case counts and record hospitalizations and then deaths for several more weeks.”

Some officials have attributed the drop in deaths over the last few months to improvements in treatment for the virus. Doctors have more tools today than they did in the spring, including the use of remdesivir, an anti-viral drug, and have learned from earlier outbreaks.

Louisiana has seen a major uptick in cases of the virus, but public health officials say they have not seen a rise in the daily death toll.

“We’re waiting,” said Sean Ellis, public information officer of the Louisiana Department of Public Health. But the daily death toll might not rise significantly, he said, because the patient population is younger. In March, only 11 percent of patients were between the age of 18 and 29. About 32 percent of patients fall into that age bracket now.

Nashville has seen a deluge of new cases, but daily deaths have only risen slightly.

Dr. Alex Jahangir, the chair of a coronavirus task force for the Nashville area, said that local experts saw a rise in cases tied to bars and parties — and young people — in recent weeks. Positive tests for the virus have soared in the city in recent days, but most of the new infections involve young people, officials said, and most of the city’s deaths involved people who are older.

Out of more than 13,000 people known to have had the virus in Davidson County, which includes Nashville, at least 138 have died. About 100 of those victims were over age 65.

If new infections continue to be concentrated among the young, Dr. Jahangir said he does not expect the daily death toll to go up by much. If young people spread the virus to older family members, he said, then the death toll could climb significantly.

The statistics mean little, though, to those who have lost relatives to the virus, including some younger people seen as less vulnerable.

Darius Settles, 30, died suddenly last weekend from the virus, one of two people under the age of 44 to die in the Nashville area since the pandemic began, officials said.

“It was just really, really shocking,” Deja Settles, his younger sister, said. “I never thought that this was going to hit this close to home.”

Mr. Settles, an organ player at church, who loved going to his 6-year-old son’s baseball games, had no known health conditions and took pains to socially distance himself, family members said. As the pandemic intensified, he helped his father, a pastor, livestream church services for thousands of viewers.

“He wanted to make sure that my ministry was going forward and reaching people,” his father, David Settles said. “If you knew my son, you knew he was life.”

Mr. Settles tested positive for Covid-19 last week, his family members said. He visited an emergency room twice for shortness of breath. Twice, he returned home without being admitted.

A statement from TriStar Southern Hills Medical Center, where Darius Settles had gone for treatment, confirmed that he received care there on June 30 and July 3, the day before his death.

“TriStar Southern Hills is deeply saddened by the passing of Mr. Settles, our condolences go out to his family,” read a statement provided to WSMV News4 Nashville. “Our caregivers spoke at length with Mr. Settles about the risk and benefits of admission versus outpatient management, but he ultimately chose to go home.”

Mr. Settles had lost his health insurance when he was laid off from a job in retail during the pandemic, his father said, and may have been reluctant to incur medical bills.

On Saturday, Mr. Settles died at home with his wife and father by his side.