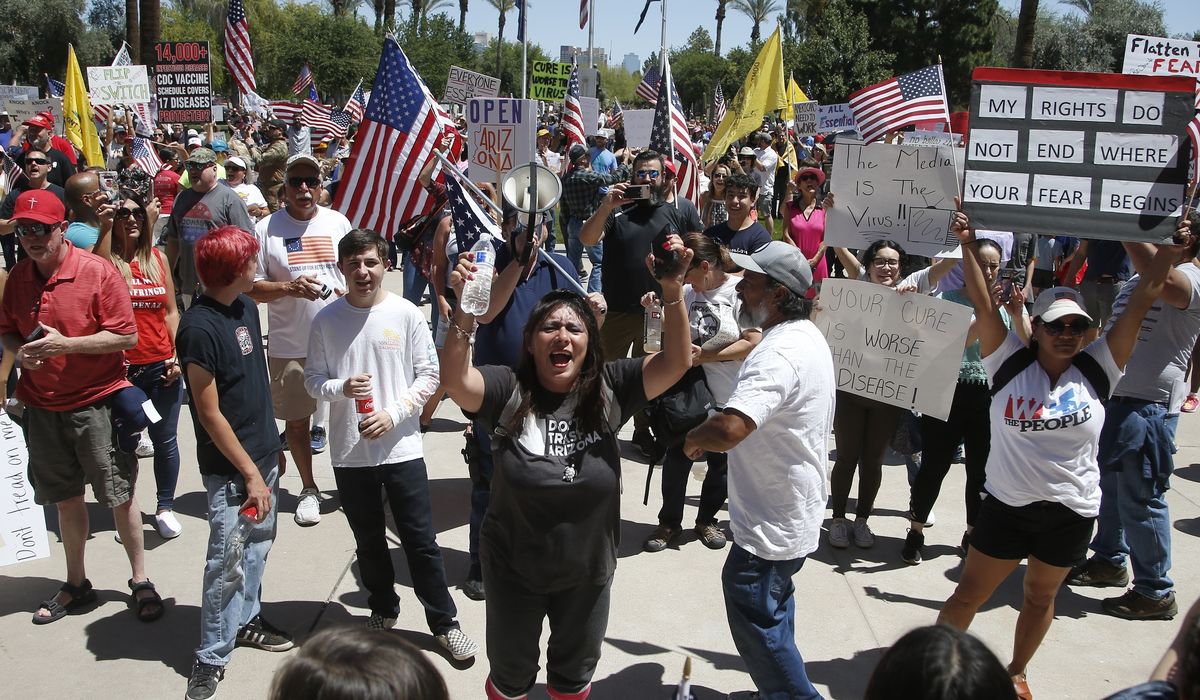 Conservatives rallied in state capitals from Pennsylvania to Arizona on Monday to reopen businesses from the coronavirus shutdown, a groundswell warning to governors to halt the unprecedented expansion of their powers.

Several hundred demonstrators in Harrisburg, Pennsylvania, defied Democratic Gov. Tom Wolf’s ban on mass gatherings — and social-distancing guidelines — to protest the governor’s tight restrictions on “non-essential” business. The boisterous rally included an excavating company’s truck cab painted with the message “Jesus is my vaccine” that blew its horn as it drove past the gathering.

“There’s talk about people saying on the first of May, we might just do something else,” Mr. Mastriano told the crowd on the steps of the state capitol. “What are you gonna do?”

“Open up!” the protesters chanted.

In Washington, the Senate neared a vote Tuesday to add $300 billion to an emergency fund to prevent more layoffs at small businesses, plus an extra $150 billion pushed by Democrats for hospitals, virus testing and disaster loans.

The tentative agreement — Democrats were still negotiating with the White House late Monday — would end a week-long partisan standoff that had shut out nearly 1 million small businesses from the financial lifeline. The initial $350 billion for the Paycheck Protection Program was exhausted in less than two weeks as businesses struggling to stay afloat clamored for aid to keep employees on the payroll and pay expenses.

“It is past time to get this done for the country,” said Senate Majority Leader Mitch McConnell, Kentucky Republican.

Democrats also wanted to add money for states and municipalities reeling from lost tax revenue and higher costs from responding to the crisis, but that funding likely will be addressed in another round of bailout legislation.

New York Mayor Bill de Blasio said President Trump is “not doing anything” to help the city get back on its feet financially amid the coronavirus pandemic. He said his city will spend roughly $3.5 billion on unanticipated health efforts this year.

“[The] federal government is not saying, we’re going to make you whole for that extraordinary effort,” Mr. de Blasio said on MSNBC’s “Morning Joe.” “My budget, I just announced, we’ve lost over $7 billion in revenue. Right now, Donald Trump is not doing anything to help my city get back on its feet.”

The blows to the U.S. economy continued to mount Monday. Oil prices fell into negative territory for the first time, meaning that oil to be delivered next month was deemed essentially worthless as demand plunges and storage space reaches capacity.

The retailer Neiman-Marcus, whose stores have been shuttered by the crisis, plans to file for bankruptcy protection this week, Reuters reported.

“I think that it’s quite likely that the second quarter is going to be one of the biggest negative numbers that we’ve ever seen and it’s because we’ve basically stopped the economy,” Mr. Hassett said on Fox Business Network.

In Ohio, Republican Gov. Mike DeWine announced that K-12 schools will be closed for in-person learning for the rest of the academic year. The announcement on schools comes shortly after Mr. DeWine said the state is crafting plans for a gradual reopening of some businesses starting next month.

The governor said he respects protesters who are calling for a quicker reopening and asked them to be safe.

“The worst thing we could do is to completely take off all restraints, go back at it — we know what would happen,” he said. “Some of those same protesters would have family members, or themselves, who might end up in a hospital and we would not have the care that they needed.”

More than 12,900 coronavirus cases and more than 500 coronavirus-related deaths have been reported in Ohio, which is home to about 11.7 million people.

“Pennsylvanians are losing their jobs,” Mr. Underwood said. “At the end of last week, the unemployment rate in Pennsylvania exceeded 20%.”

About 1.3 million state workers, or one in five, have filed for unemployment benefits in the past four weeks.

The crowd of demonstrators booed when state Sen. Judy Ward, a Republican and a nurse from Blair County who supports the grassroots movement to reopen, chided the attendees for not observing safety guidelines.

“I would never have recommended that all of you come here today,” Ms. Ward said. “I’m a nurse and I recognize that we’re in a pandemic. It frightens me that so many of you don’t have facemasks and are standing shoulder-to-shoulder.”

As the boos and catcalls rose, the legislator raised her voice to shout over the crowd.

“But I’m grateful that you are here, risking your own personal safety to send a message to the governor to end the shutdown,” she said. “I still believe we need to be careful and mindful of what scientists are telling us. But you’re not here to protest caution. You’re here to protest silencing civilian voices and hampering our democratic process.”

State Sen. Shariff Street, Philadelphia Democrat, said of the rally, “There is a small but vocal sector of people who don’t believe the science and that’s who these protests represent.

“The silent majority of people are more concerned about being safe,” he told reporters.

Mr. Wolf said Monday that some statewide measures meant to enforce social distancing would be rolled back. He said he is signing online-notary legislation that will pave the way for online vehicle sales, and allow limited building construction work to resume May 8,

“If we go too quickly [in reopening], this could be unsafe for people,” Mr. Wolf said. “If we go too quickly, there could be very many people who don’t want to go to work because they’re afraid for their life. … As much as we might wish for a magic wand, it doesn’t exist.”

Michigan Gov. Gretchen Whitmer, a Democrat, on Monday criticized protesters who had rallied in the state capital last week against her stay-at-home order. She compared them unfavorably to Americans during World War II who had sacrificed on the home front.

“President Trump called this a war and it is exactly that. So let’s act like it,” Mrs. Whitmer said.

“In World War II, there weren’t people lining up at the Capitol to protest the fact that they had to drop everything they were doing and build planes or tanks or ration food.”

The president has said he sympathizes with protesters, saying they have “cabin fever” and need to get their lives back. White House counselor Kellyanne Conway acknowledged that protesters should stay six feet apart and wear masks, but she added, “at the same time, some of these governors have physically distanced from common sense.

“In Michigan you could basically smoke your grass but not cut your grass. This makes no sense to many people,” Mrs. Conway said on Fox News. “And so for them this is not fomenting domestic rebellion. I look at those people and I see the forgotten men and forgotten women. Economically, they’re saying, look, I’m in a low infection area, I’m asymptomatic, not exposed, I want to get back to work.”

She said millions of Americans are facing more bills to come due on May 1.

“How are they going to meet these bills in May?” she asked. “Their rent, their mortgage, the food for their children, basic necessities in their households and they’re saying I want to get back to work.”

• Gabriella Muñoz contributed to this report.