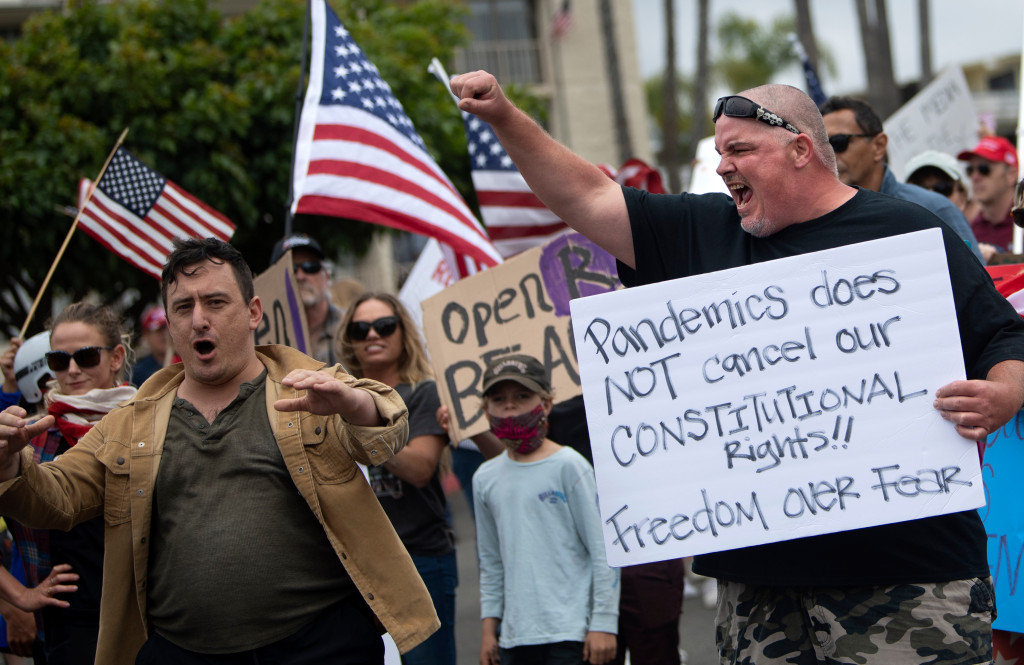 As California’s confirmed cases of COVID-19 pushes close to the 34,000 mark, there was some good news. After the deadliest week yet in California, the death toll related to coronavirus has slowed.

Gov. Gavin Newsom says the numbers are bouncing around, but shelter-in-place and social distancing measures appear to be working to flatten the curve. Meanwhile, demonstrators calling for California and other states to reopen are on the rise throughout the nation.

Stay up to date with the virus’ spread with our Bay Area county-by-county map and our California-wide map.

How to tell if you may have COVID-19
If you believe you have the virus, here’s what to do
How to get groceries without going to the supermarket
Here are tips for staying safe as you go to the grocery store
These Bay Area restaurants are offering delivery or takeout
If you are laid off or have hours cut in the crisis, here’s how to apply for state support
These Bay Area companies are hiring during the coronavirus crunch

President Donald Trump backed away from his Tweeted promise to stop all immigration into the country, saying the executive order he expects to sign Wednesday, will apply only to people seeking green cards and won’t affect workers entering the country on a temporary basis. The order will last 60 days. — CNN, 4: 05 p.m.

Alameda County supervisors beefed up its temporary moratorium on evictions, providing many people struggling to pay their rent a bit of breathing space. The revisions tighten regulations to prevent evictions happening without cause. — Peter Hegarty, 3: 56 p.m.

Gov. Gavin Newsom is expected to go into specifics on how many COVID-19 tests need to be done before the state can safely be reopened and its residents released from isolation. That number is dynamic, the governor warned, but it’s one of the issues he will address on Wednesday. — John Woolfolk, 3: 45 p.m.

Netflix increased its subscription base, adding almost 16 million new subscribers in the first three months of the year.  Demand for the streaming services has surged as consumers worldwide, ordered to shelter-in-place during the global pandemic, sought new sources of entertainment. — Rex Crum, 3: 30 p.m.

Small businesses in San Mateo County could get some financial aid from the county, which on Tuesday approved the creation of a $1 million relief fund, drawn from money collected through the 2016 voter approved Measure K. — Aldo Toledo, 3: 15 p.m.

Senate passed an almost $500 billion relief package for small businesses and sent it onto the House, which could vote on it on Thursday. The bill aims to give additional federal aid to small businesses hurt by the coronavirus pandemic as well as aiding hospitals dealing with large numbers of seriously ill patients. — CNN, 2: 20 p.m.

With the number of new cases and deaths from COVID-19, Gov. Gavin Newsom said now is not the time to pull back on restrictions that have kept the state’s crisis from worsening. The numbers continue to rise, even as the curve begins to flatten. Newsom will give an update Wednesday on how the state is progressing toward reopening. — Kerry Crowley, 1: 22 p.m.

Hydroxychloroquine, a drug used to treat malaria that has been touted by President Donald Trump and others as a treatment for COVID-19, proved to be of little use in trials conducted at U.S. veterans’ hospitals. More deaths were reported among those given hydroxychloroquine versus standard care, researchers reported. — Associated Press, 1: 10 p.m.

Thousands of uninsured people in Santa Clara Count could receive discounted or free medical care under a new plan approved Tuesday by the county’s Board of Supervisors. The plan will broaden the income requirements for the county’s stopgap insurance plan, providing health coverage for people in the “missing middle” during the pandemic and beyond, and lessening the burden on local emergency rooms. — Fiona Kelliher, 1: 04 p.m.

Bay Area cities, preparing budgets for the next fiscal year, are bracing for shortfalls caused by coronavirus shutdown, which has cut deeply into sales tax revenue. Officials expect the economy to come back once the shelter-in-place is lifted, but no one knows how long the recovery will take. — Pete Hegarty, 12: 57 p.m.

Large companies, many of which are publicly traded, received millions of dollars in loans that were intended to help small businesses struggling in the coronavirus economy. About 25 percent of the companies were in financial trouble before the crisis began. — Associated Press, 12: 25 p.m.

Here’s a look at the states that are loosening the reins on coronavirus restrictions despite the ongoing pandemic. Their governors acknowledge the number of people exposed to the virus will likely increase, but hope the boost to the economy will be worth it. — CNN, 11: 15 a.m.

An agreement on details of a nearly $500 billion coronavirus aid package for small businesses has been reached, and the Senate could vote on it later today. The aid package would also include help for hospitals and more virus testing. — Associated Press, 10: 50 a.m.

And there will be chocolate. See’s Candy has reconfigured its production and distribution lines and restarted sales of candy. A few stores have reopened, with social distancing restrictions, and limited online sales have resumed through Oriental Trading Company. — Linda Zavoral, 10: 55 a.m.

San Francisco has become the latest city to close blocks on 13 miles of streets, permitting only pedestrians, bicyclists and local traffic. The closures will be rolled out at the rate of 8 blocks at a time. — Evan Webeck, 10: 47 a.m.

The state Department of Social Services released the promised list of nursing homes and facilities with COVID-19 outbreaks, but it includes just five counties. It also doesn’t include any information on the number of COVID-19 deaths at the facilities. — Thomas Peele, 9: 53 a.m.

Bay Area employers are planning to cut their work forces by more than 50,000, according to documents filed with the state Employment Development Department. Adding to that number is the San Francisco Giants, which is cutting 1,200 employees. — George Avalos, 8: 27 a.m.

Doctors are asking states with the death penalty to give them stores of one drug used during executions, which could be beneficial in treating coronavirus patients on ventilators. — Associated Press, 8: 10 a.m.

In an attempt to protect themselves from coronavirus, some people are accidentally poisoning themselves with cleaning products. Calls to state and local poison control centers tied to cleaners and disinfectants rose 20 percent in recent weeks, the Centers for Disease Control and Prevention reported, with more than 45,000 calls. — Bloomberg News, 6: 14 a.m.

Football superstar Tom Brady was cited for working out in a Tampa Bay park, which is closed because of Florida’s shelter-in-place order. Brady, who left the New England Patriots to become the quarterback for the Tampa Bay Buccaneers, recently relocated to the Florida city. — CNN, 5: 08 a.m.

The economic fallout related to the coronavirus pandemic continues as Neiman Marcus said it is preparing to file for bankruptcy. Other major major retailers are struggling to avoid a similar fate. The Dallas-based company was forced to temporarily close all 43 of its Neiman Marcus locations, along with 22 Last Call and two Bergdorf Goodman stores, leaving it almost $5 billion in debt. — Kevin Smith, 4: 55 a.m.

A drug developed by Bay Area-based Gilead Sciences, could be effective in treating COVID-19, early testing indicates. The drug, originally developed against Ebola and used for SARS and MERS, appears to stop the virus from reproducing in the body, shutting it down. — Teri Sforza, 4: 31 a.m.