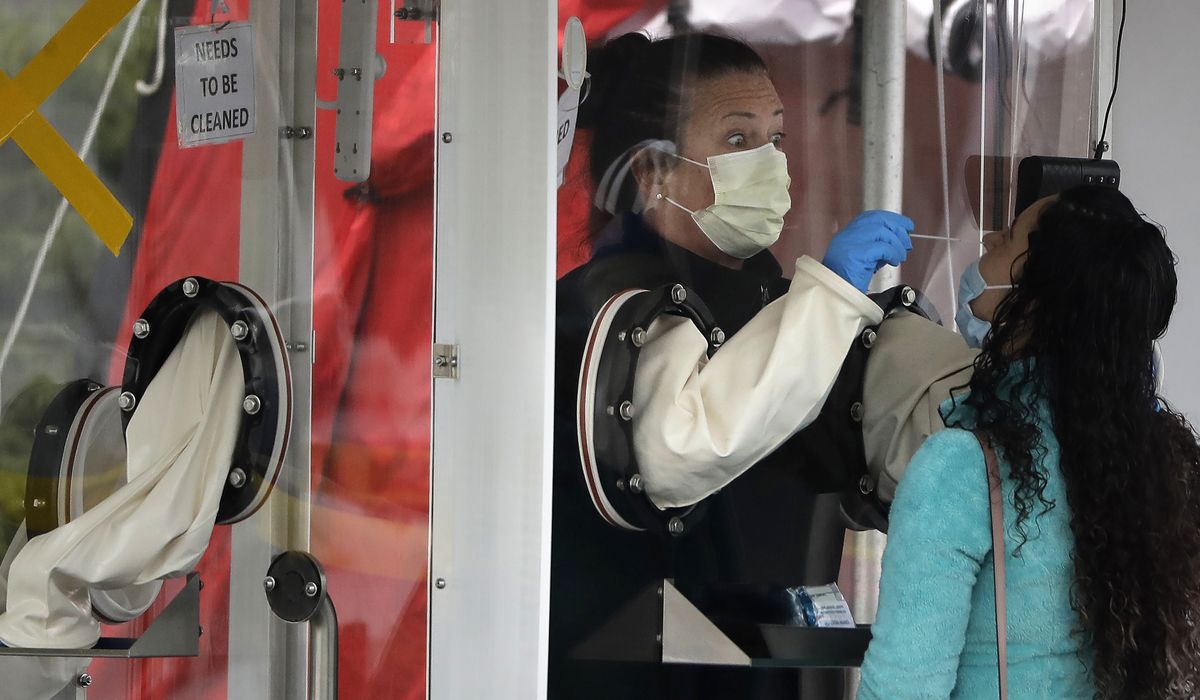 Gov. Charlie Baker warned Massachusetts for weeks that the “worst part of the pandemic” would hit around mid-April.

“That part of the pandemic is here,” he said Thursday as hospitals were getting a surge of COVID-19 patients and his state tally rose to third in the nation.

The governor in neighboring Rhode Island said hospitals probably won’t see a COVID-19 peak until May 3, as the White House touts progress across the nation but points to hard-hit Providence as a potential hot spot in the high-density Northeast.

In the heartland, a Smithfield Foods meat processing plant in South Dakota just turned into the biggest COVID-19 hot spot in the nation, with 644 cases among workers and their contacts edging out tallies on the USS Theodore Roosevelt docked in Guam and at the Cook County Jail in Chicago.

President Trump is itching to get the country open and running again. He said there is a light at the end of the tunnel as places such as New York City begin to emerge from the depths of the crisis and the rates of infection flatten in Detroit, Denver and elsewhere.

Yet some places are peaking before others. The flare-up in South Dakota revived the type of economic shutdown debate that unfolded weeks ago in hard-hit New York, where Gov. Andrew Cuomo slowly “closed the valve” by shuttering businesses on a rolling basis through March.

Analysts say defining a “hot spot” is unclear and is in the eye of the beholder. But it has become a household term for places with sudden incidences of cases that could tax health care systems or pose risks of wider transmission in the surrounding region. It can be a state or a city, or a narrower slice of those areas, as the Smithfield plant is to Sioux Falls.

New York City is the king of all hot spots, with nearly 11,000 deaths accounting for more than a third of the roughly 31,000 fatalities nationwide, according to a tracker from Johns Hopkins University.

After projections that the state could need more than 110,000 hospital beds at the apex of the crisis, the number of hospitalizations dipped below 18,000, continuing a string of declines in the past few days.

Mr. Cuomo did report 606 new coronavirus-related deaths, which pushes the total above 12,000 in a state with a population of 20 million people.

“That is still continuing at a really, really tragic rate,” the governor said.

Mr. Trump has seized on the positive trends as he tries to coordinate a phased reopening of America with governors and top business leaders.

“New cases are declining throughout the New York metropolitan area. Cases in the Detroit and Denver metro areas are flat,” the president said midweek. He also said cities such as Baltimore showed “great signs of progress.”

However, the situation remains fluid. The office of Maryland Gov. Larry Hogan, a Republican, said there are still hot spots in the Baltimore-D.C. corridor, where transmission is “definitely still going up the curve.”

The channel of hot spots runs south from Baltimore City/Baltimore County to Howard and Anne Arundel counties. It extends down to Prince George’s and Montgomery counties outside of the nation’s capital and then south of the District to Charles County in southern Maryland.

Members of Mr. Trump’s coronavirus task force acknowledged that some places haven’t peaked. They pointed to Providence, surrounded by hard-hit New York, Connecticut and Massachusetts, as a potential hot spot.

Rhode Island, with a population of 1.1 million, has averaged 2,950 positive tests per day since Saturday, compared with 1,500 during the preceding five-day period, according to data from the COVID-19 Tracking Project.

The governor said she couldn’t predict when the peak would hit. Models suggest somewhere between April 27 and May 3.

Likewise, South Dakota Gov. Kristi Noem acknowledged the high number of cases at the Smithfield plant Thursday but pointed to aggressive testing as part of the reason the state has attracted national media attention.

“We do have a hot spot in Sioux Falls. I think everybody is well aware of that and people are talking about that,” Mrs. Noem said Thursday. “I want you also to realize, though, we are aggressively testing this population, and we’re being very transparent with the public about it.”

South Dakota officials said 518 employees from the Smithfield plant got infected and more than 126 close contacts of the workers also tested positive for COVID-19, prompting the governor to invite specialists from the Centers for Disease Control and Prevention to come to the state.

The governor said the CDC went through the plant Thursday and will draft a report on the situation.

Federal and state officials want to determine whether there is a safe way to reopen the plant, which employs 3,700 and has been shuttered indefinitely.

Mrs. Noem, a Republican, is one of the few U.S. governors who did not issue a stay-at-home order, though she has noted the plant is essential for the food supply and would have remained open regardless. It’s also not clear whether Mr. Trump’s guidelines for reopening business will have a major influence there because South Dakota technically never shut down its economy.

The governor said her COVID-19 strategy is working — only 36 people have been hospitalized, and the state is bending its overall curve of transmission faster than previously forecast.

“We have cut our peak, and that’s a good thing, and that is encouraging to all of us,” Mrs. Noem said at her Thursday briefing. “Our health care system can handle what’s coming at us.”

Others say the flare-up underscores the risk that COVID-19 poses in every state, even as the president lays out guidelines for states seeing a downward slope in transmission.

“South Dakota has become one of the fastest-growing hot spots in the U.S., even as other parts of nation see their epidemics start to level off or slow,” former Food and Drug Commissioner Scott Gottlieb tweeted. “South Dakota has a doubling time now of about 4 days. In the setting of the ongoing national epidemic, every state is vulnerable.”