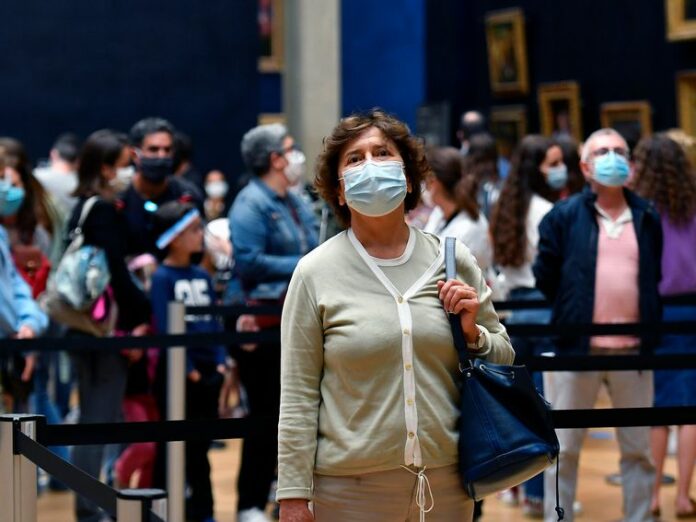 For the most up-to-date news and information about the coronavirus pandemic, visit the WHO website.

An open letter, signed by 239 researchers from 32 countries, sent to public health bodies, including the World Health Organization, on Monday argues there’s significant evidence the coronavirus can persist in the air and spread in tiny, airborne particles from person to person. The letter, published in the journal Clinical Infectious Diseases on Monday, advocates for “the use of preventative measures to mitigate this route of airborne transmission” and suggests re-examining the role of different transmission routes in the spread of disease.

The existence of the open letter was first reported by The New York Times and Los Angeles Times on Saturday, describing the WHO as an organization “out of step with science” on the matter. On Thursday, the WHO responded by updating its scientific brief on how the coronavirus is spread.

It notes the science isnt yet settled on whether SARS-CoV-2, the coronavirus that causes COVID-19, spreads effectively and causes disease via the air. And it appears it’s not a yes or no equation. Like many aspects of the pandemic, it’s a puzzle that remains unsolved.

From the lab to your inbox. Get the latest science stories from CNET every week.

“It’s possible and even likely that airborne transmission occurs for SARS-CoV-2 sometimes,” Babak Javid, an infectious diseases physician at the Tsinghua University School of Medicine, said in a statement. “It’s not at all clear how common this is.”

The WHO’s official guidance on the matter is the virus moves from person to person via “small droplets” that are expelled when a person with COVID-19 coughs, sneezes or speaks. These droplets are too heavy to travel great distances, sinking quickly to the ground. In addition, it states the virus can be picked up from surfaces. That’s why hand-washing and social distancing are important to help curb the spread.

But the signatories in the open letter argue SARS-CoV-2 lingers in the air, and this may play a role in transmission. They believe when a person with COVID-19 expels virus, the particles remain aloft and can travel great distances on air currents, particularly where ventilation is poor. “It is understood that there is not as yet universal acceptance of airborne transmission of SARS-CoV2; but in our collective assessment there is more than enough supporting evidence so that the precautionary principle should apply,” they write.

To mitigate the risk of airborne transmission, they propose two major measures should be implemented: Better ventilation in public buildings and reducing overcrowding. It also calls for the WHO to recognize this potential route of transmission and more effectively communicate the risks associated with it.

“We are concerned that the lack of recognition of the risk of airborne transmission of COVID-19 and the lack of clear recommendations on the control measures against the airborne virus will have significant consequences,” the researchers write. The WHO has been reticent to provide additional advice highlighting the risks, citing a lack of evidence.

“I’m a bit shocked this came up,” says Isaac Bogoch, an infectious diseases researcher at the University of Toronto. “There is no new data, just a signed letter that makes headlines.”

The debate is centered on interpretation of transmission modes, and this confusion extends to the public’s perception of how the disease spreads.

“A problem here is the potential conflict between the technical notion of airborne transmission and the perception of the general public about this term,” said Jose Vazquez-Boland, chair of infectious diseases at the University of Edinburgh.

The academic kerfuffle essentially pits “droplets” — the heavy particles that fall to the ground within six feet — against “aerosols” — light viral particles that remain suspended in the air. The key difference is the size of the particles.

“The size of [a] droplet is going to be really important, because all effectively have mass or weigh something,” explains Bruce Thompson, a respiratory expert at Swinburne University in Australia. The bigger respiratory droplets from something like a sneeze don’t stick around in the air long; they’re airborne, but they drop to the ground quickly because of gravity. Aerosols are different.

“If it’s an aerosol, it’s potentially going to be floating around the air more,” Thompson says.

These technical distinctions can make it hard for the general public to understand what it means for a virus to be “airborne.”

“For the public, it may be difficult to differentiate between the different situations and technical definitions,” Vazquez-Boland said.

You might immediately think just going for a jog or spending time outside could result in infection as COVID-19 particles make their way into your lungs, but it’s more likely the “airborne” route occurs in densely packed, indoors settings with poor ventilation. Whether you can be infected with SARS-CoV-2 is likely context-specific, and many factors will play a role. Some of this nuance is being lost in the academic to and fro and causing some of the public’s confusion over the spread of the disease.

“There is a bit of a false dichotomy between droplet and airborne transmission,” Bogoch said. “It’s more of a spectrum rather than silos.

“COVID-19 falls closer to the droplet end of the spectrum,” Bogoch said.

Even if the risk is understated or under-acknowledged by the WHO, it may not have a dramatic effect on combating the spread. The organization does recommend avoiding crowded places as part of their official guidance on protecting yourself from COVID-19. It also advises those who feel sick to stay home or wear a mask when leaving the house, another factor limiting the risk of airborne transmission.

For now, whether coronavirus is airborne, the guidance remains mostly the same. Avoid crowded indoor locations, or if you must be indoors, try to spend less time there. The virus may accumulate in poorly ventilated spaces, increasing the risk of infection.

You should continue to maintain social distancing measures. When you’re out, put on a mask. Wash your hands. And keep listening to advice from local health authorities with the caveat that information can — and will — change based on new evidence.

During a press briefing on Tuesday, journalists questioned the WHO about the New York Times report and the open letter, giving the organization a chance to speak publicly on the matter.

“We acknowledge there is emerging evidence in this field,” said Benedetta Allegranzi, a WHO technical lead in infection prevention and control. “We believe that we have to be open to this evidence and understand its implications regarding the modes of transmission.”

“As we’ve said previously, we welcome the interaction from scientists all over the world,” added Maria Van Kerkhove, technical lead on the COVID-19 pandemic. “We are also looking at the role of airborne transmission in other settings where you have poor ventilation,” she noted. Van Kerkhove noted the WHO had been working on a “brief” regarding transmission for several weeks. The organization released the brief on Thursday, July 9, which is an update on the “modes of transmission” statement from March 29.

The WHO now acknowledges the emerging evidence of airborne transmission provided by the open letter, but the organization’s new brief states patients with COVID-19 “primarily” infect others through droplets and close contact. The WHO hasn’t “reversed” its guidance, as some claim, but rather added to it based on new evidence (and the open letter), while acknowledging the evidence for airborne transmission remains slim and “transmission of SARS-CoV-2 by this type of aerosol route has not been demonstrated.”

How important this route is for spreading COVID-19 is still up for debate and the WHO’s updated brief states “urgent high-quality research is needed to elucidate the relative importance of different transmission routes.”