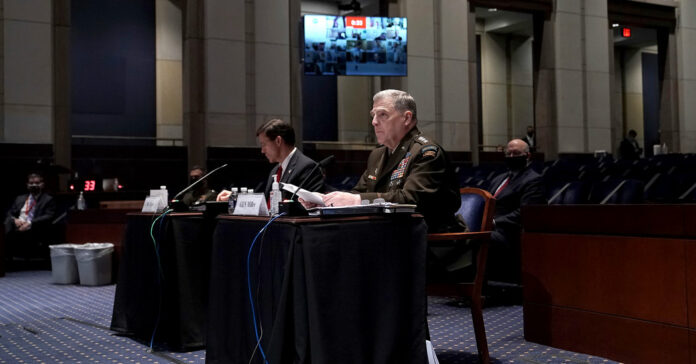 WASHINGTON — The top American military officer delivered the Pentagon’s strongest public expression of concern to date on Thursday about the C.I.A.’s assessment that Russia offered bounties to Afghan militants for killing American troops, even as former top intelligence and military leaders questioned the Trump administration’s inaction.

The current and former officials testified at a pair of House hearings as lawmakers grappled with the continuing fallout from the disclosure of the intelligence assessment. Gen. Mark A. Milley, the chairman of the Joint Chiefs of Staff, and Defense Secretary Mark T. Esper testified in front of the Armed Services Committee, and former national security officials before the Foreign Affairs Committee.

“If in fact there’s bounties, I am an outraged general,” said General Milley, who served three tours in Afghanistan. “If, in fact, there’s bounties directed by the government of Russia or any of their institutions to kill American soldiers, that’s a big deal. That’s a real big deal.”

He also said that while the government so far lacks proof that any Russian bounties caused specific military casualties, “we are still looking.”

“We’re not done,” he continued. “We’re going to run this thing to ground.”

General Milley’s comments stood in contrast to efforts by the Trump administration to dismiss the C.I.A.’s judgment and to justify the White House’s failure to authorize any response to Moscow by downplaying the assessment as uncorroborated. After The New York Times first reported on the suspected bounties on June 26, President Trump deemed the matter a “hoax.”

“It is outrageous to me that we ask our servicemen and women to put their lives in danger for our peace and security, and yet the administration won’t believe a credible piece of intelligence putting bounties on their heads,” Representative Gregory W. Meeks, Democrat of New York, said at the foreign affairs hearing. “How was Congress never briefed until the claim was leaked to the press at great risk to whistle-blowers?”

Based on intelligence that included accounts from interrogated detainees and electronic intercepts of data showing payments from a bank account linked to Russia’s military intelligence agency, the G.R.U., to the Taliban, the C.I.A. concluded that Russia had escalated its support to the Taliban to include financial incentives for killing Americans and other coalition troops.

The C.I.A. — as well as analysts at the National Counterterrorism Center — expressed medium or moderate confidence in that conclusion. The National Security Agency, which puts greater stock in surveillance intercepts, was more skeptical, officials have said.

The White House initially denied that Mr. Trump had been briefed, but did not deny a subsequent Times report that the intelligence was included in his written daily briefing in late February. But Mr. Trump often chooses not to read his written briefing, and White House aides later stressed to lawmakers that a C.I.A. official who delivers his oral briefings did not bring it up.

Michael J. Morell, a former acting C.I.A. director, portrayed that as scapegoating in testimony to the Foreign Affairs Committee. He pointed out that the briefer is the lowest-ranking person in the room during the president’s regular intelligence briefings, and said the national security adviser, the C.I.A. director, the director of national intelligence or the White House chief of staff could also have brought the suspicions about Russian bounties to the president’s attention. He also noted that Mr. Esper receives a copy of the written President’s Daily Brief.

Mr. Morell also disputed the White House’s suggestion that an intelligence assessment had to be unanimously backed by intelligence agencies to be taken seriously. In previous administrations, he said, if the intelligence community assessed such information at any level of confidence, officials would have told both the president and congressional leaders immediately about that judgment and any dissent. If the confidence level were low, he said, an administration would seek more information before acting, while a medium- or high-level assessment would most likely result in a response.

“You never have certainty in intelligence,” Mr. Morell added.

John W. Nicholson Jr., a retired general who led coalition forces in Afghanistan from 2016 to the middle of 2018, testified before the Foreign Affairs Committee that Russia grew bolder over his tenure. Afghan governors, he said, brought him weapons and other military equipment and said Russians had provided them to the Taliban.

General Nicholson talked about Russian support for the Taliban publicly while still in that role, and he said on Thursday that it was important to respond to such findings — including by going public with accusations to elicit a response from Russia.

“It may just be denial, but you’ve got it on their radar screen,” he said. “They know they’re being watched. They know you’re pushing back. So these kinds of actions are extremely important. And of course, the higher up you go, the more powerful the response is.”

Later, pressed by a Republican lawmaker, Representative Lee Zeldin of New York, to comment on leaks of classified intelligence, General Nicholson noted that they were unhelpful — his comments were garbled in the live video of the hearing that was conducted remotely because of the pandemic — but then praised the hearing itself. He said that drawing attention to the American suspicions of the bounty plot could cause the Russians “to dial down what they are doing.”

The ranking Republican on the Foreign Affairs Committee, Representative Michael McCaul of Texas, said the government needed to take the intelligence seriously given Russia’s track record. He criticized Mr. Trump’s idea of inviting Russia to rejoin the economic alliance known as the Group of 7, and noted that the administration already had legal authority to impose new sanctions.

“While it’s not news that Moscow has provided the Taliban with weapons and other support,” Mr. McCaul said, “Russia paying bounties for the murder of American service members would be an unacceptable escalation. If true, the administration, in my judgment, must take swift and certain action to hold the Putin regime accountable.”

The tone was different in the Armed Services Committee hearing, where several Republicans sought to play down the significance of the intelligence assessment, pointing to a lack of concrete evidence linking Russian payments to specific American combat casualties.

Early in that hearing, a Republican asked Mr. Esper if he had ever received a briefing that included the word “bounties” in connection with killing American troops, and he said he had not. But later, under skeptical questioning from Democrats, he acknowledged that he had been briefed in February about intelligence that Russia was making “payments” to Taliban-linked militants for killing American troops.

Commanders in the region heard about the reports a month earlier, Mr. Esper said, and had taken steps to safeguard American troops, who he noted were already at the “highest levels” of force protection given they were operating in a combat zone. Still, he stressed, the intelligence was uncorroborated.

The discussion at both hearings repeatedly returned to Russia’s broad range of misbehavior, such as election interference and disinformation campaigns as well as its suspected covert support for the Taliban that the C.I.A. now thinks has escalated to offering bounties to incentivize more frequent attacks amid peace talks.

The issue now, General Milley said, is what should or could be done to push back — through steps like diplomatic protests, the imposition of new economic sanctions or other forms of pressure.

“Some of that is done,” General Milley said. “Are we doing as much as we could or should? Perhaps not.”