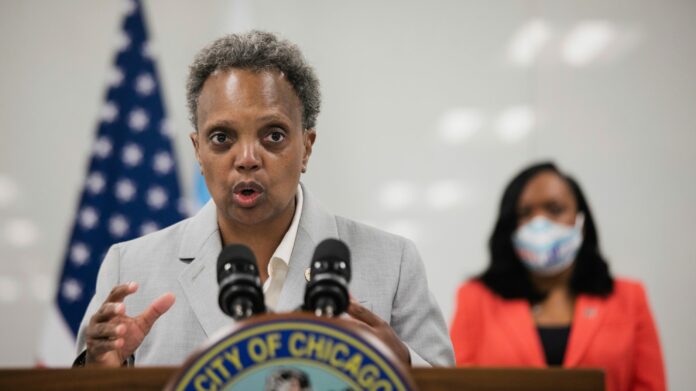 Chicago’s mayor says if President Trump is sincere about wanting to halt violence in her city, then he should act to stem the flow of illegal guns. Lori Lightfoot says she doesn’t want federal agents without insignia deployed in Chicago. (July 20)

CHICAGO – The mayor of Chicago said Tuesday that the Trump administration would not be deploying unnamed federal officers to the city, as seen in Portland in recent days.

“What I understand at this point, and I caveat that, is that the Trump administration is not going to foolishly deploy unnamed agents to the streets of Chicago,” Mayor Lori Lightfoot said Tuesday. “We have information that allows us to say, at least at this point, that we don’t see a Portland-style deployment coming to Chicago.”

Lightfoot said the administration is instead sending agents from the Federal Bureau of Investigations, Drug Enforcement Administration, and the Bureau of Alcohol, Tobacco, Firearms and Explosives.

“Unlike what happened in Portland, what we will receive is resources that are going to plug in to the existing federal agencies that we work with on a regular basis to help manage and suppress violent crime,” she said. “I’ve been very clear that we welcome actual partnership, but we do not welcome dictatorship.”

John Lausch, U.S. Attorney for the Northern District of Illinois, is “in the loop” on the deployment and is helping to manage the additional resources, Lightfoot said.

“That is a big difference,” she said. “In Portland, they ignored the U.S. attorney, put these agents on the street, and I don’t think anybody can quibble with the fact that what happened … was undemocratic.”

Lightfoot was addressing concerns that the Trump administration is weighing a broad deployment of federal officers to Chicago and other cities nationwide, even as state and local leaders in Oregon denounced tactics by federal agents who detained Portland protesters in unmarked cars while wearing uniforms with no specific agency affiliation.

The deployment discussions include dispatching almost 200 officers to Chicago, according to a person familiar with the operation who was not authorized to discuss the plans publicly.

Prior to Lightfoot’s announcement, Illinois Gov. JB Pritzker said he would do everything he could to prevent agents from coming.

Pritzker said that if the Trump administration is thinking about sending agents in, it should be in contact with the governor and the mayor of Chicago.

Federal officers in Chicago?: President Trump is weighing the deployment

Portland Mayor Ted Wheeler and Lightfoot, along with mayors of several major cities, penned a joint letter Monday asking for the withdrawal of federal forces from their jurisdictions and said federal officers have no oversight and have blatantly disregarded local rules and expectations about wearing identifications, using tear gas and crowd control.

“Our democracy is at stake, and I’ll be darned if I’m going to let anybody – even if their name is Mr. President – bring those kind of troops to our city and try to take on our residents,” Lightfoot told MSNBC on Monday night. “That’s not going to happen in Chicago. And I’m going to use every tool at my disposal to stop them.”

Trump has frequently criticized Chicago for gun violence. He sent a letter to Lightfoot and Pritzker at the end of June, calling the violence “unacceptable” and offering to “help devise a plan to make Chicago safe.”

Lightfoot said Tuesday that if the president really wanted to help Chicago fight violence, he would advocate for “common sense guns laws,” such as universal background checks.

“We need the federal government’s help to crack down on the gun trafficking that is routine, unfortunately, in our city and ends up in the death of our children. That’s something that if the president wanted to do something effectively right here, right now, he could do that,” Lightfoot said. “That’s what partnership would look like.”

Chicago CRED, a community outreach and anti-gun violence group, called the president’s “threat” to send in federal agents a “distraction.” The group said the president should be focusing his efforts on gun safety and social services.

“If he really wants to help, he should pass gun safety laws that keep guns away from criminals,” the group said in a statement. “He should help rebuild neighborhoods. He should fund mental health services and support outreach programs. He should fund public education so that schools can safely reopen. We know what works and the very last thing we need are federal agents harassing people and violating their rights.”

As of July 12, shootings in Chicago were up 46% from the same time last year, and murders were up 48%. There have been more than 1,500 shootings so far this year, and more than a dozen children have been fatally shot.

This past weekend alone, 53 people were shot in Chicago and 12 were murdered, Police Superintendent David Brown said Monday.

Shootings on the rise in several cities: Children are paying the price

The city has seen hundreds of protests in recent months against police brutality and the economic disinvestment from minority neighborhoods on the city’s South and West sides.

On Friday, an initially peaceful rally for Black and Indigenous lives in Grant Park turned violent when protesters and police clashed near a statue of Christopher Columbus.

As hundreds of protesters marched toward the statue, dozens of people wearing black and carrying black umbrellas began launching frozen water bottles, fireworks and other projectiles at police guarding the statue, injuring 49 officers, Brown said in a news conference Monday.

“Peaceful demonstrations have been hijacked by organized mobs,” Brown said.

Many protesters were also injured in the encounter, including 18-year-old activist Miracle Boyd, who had her teeth knocked out when she was punched in the face by an officer.

Lightfoot condemned the actions of some protesters and police but said sending in federal agents was not the solution.

Chicago police said Tuesday that it did not have any information on specific deployment plans.

“If federal agents are deployed, it is critical that they coordinate with the Chicago Police Department and work alongside us to fight violent crime in Chicago,” police spokesperson Kellie Bartoli said.

‘Tired of burying our children’: 4 toddlers shot in Chicago amid surge in gun violence