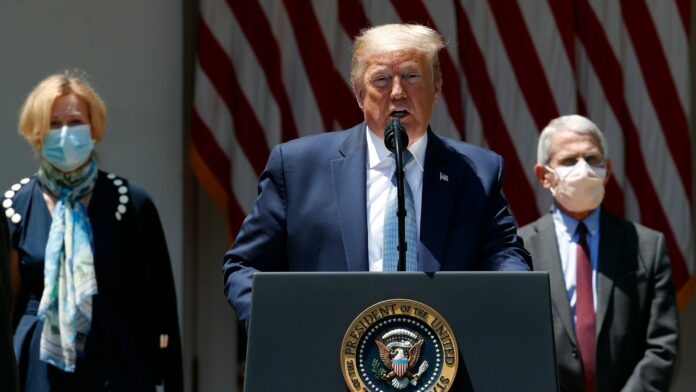 Donald Trump’s push to reopen schools comes amid a nationwide debate over whether it’s safe for children to return to the classroom amid coronavirus.

On Wednesday, President Donald Trump put the nation’s schools on notice via Twitter, saying he may cut their funding if they don’t reopen their classrooms this fall.

He also tweeted Wednesday that he disagrees with the Centers for Disease Control and Prevention’s (CDC) “very tough & expensive guidelines for opening schools,” as the coronavirus pandemic continues. Vice President Mike Pence said the agency would be issuing new guidance next week.

CDC Director Dr. Robert Redfield has since announced that the agency will not revise its guidance. White House press secretary Kayleigh McEnany on Thursday said the CDC will not revise the current guidelines but will issue “supplemental guidance.”

While the CDC recommendations on in-school practices – such as wearing face masks, separating desks and staggering schedules for students – still hold, the debate led many to question whether the president has the power to cut federal school funding or influence the CDC. Here are answers to some frequently asked questions from public health and educational policy leaders:

Can the president change or revoke federal funding for public schools?

“It’s a constitutional issue,” said William Mathis, managing director at the National Education Policy Center. “The purse is controlled by the Congress.”

Because the president doesn’t have Congress’ fiscal powers, any effort by the Trump administration to tie already-approved funding to specific actions would likely end up in court.

For the next round of funding, the Democratic-controlled House is unlikely to agree to target it only to reopened schools.

Democrats included $58 billion in additional school funding in a $3 trillion coronavirus relief package that passed the House in May and must still be negotiated with the GOP-controlled Senate.

Sen. Pat Roberts, R-Kan., said Thursday that it’s “too early to tell” if an agreement can be reached on the administration’s desire to add conditions to additional school assistance.

“I would much prefer that schools open,” Roberts added. “But I don’t want them to open unless it’s safe.”

How is federal funding determined? What schools are most impacted?

The federal government provides billions of dollars to schools through grants for low-income schools and special education programs. Washington also designated about $13 billion for schools in a previous coronavirus relief package.

However, the vast majority of funding for public schools across the country still comes from non-federal sources.

The remaining 92% of funding falls largely on states and local districts. Mathis explains how most local funds come from property taxes – which means low-income communities, in particular, are underfunded, as they don’t have the necessary tax base.

“It’s very inequitable,” he said. “The burden falls worst on the poorer districts, the big-city districts.”

Therefore, federal funding – or lack thereof – has a greater impact on lower-income districts.

Who doesn’t want schools to reopen?

“Ultimately it’s not a matter of ‘if’ schools should reopen, it’s simply a matter of ‘how,'” said Education Secretary Betsy DeVos. “They must fully open and they must be fully operational, and how that happens is best left to education and community leaders.”

DeVos pointed to the American Academy of Pediatrics’ (AAP) guidance, which urges schools to reopen if possible.

In addition to underlining the importance of implementing public health policies to prevent the spread of COVID-19, AAP writes, “AAP strongly advocates that all policy considerations for the coming school year should start with a goal of having students physically present in school.”

McEnany has pointed to the millions who depend on in-person school lunches. The National School Lunch Program’s daily participation is around 30 million students.

Mathis also recognizes the number of negative implications that come with closing the schools again – including the lack of childcare options for parents, negative social development impacts, and academic progress – but notes the dangers of the pandemic.

“I think we need to get the schools open as soon as practical, but I worry…that we may be opening too fast, and if we just re-up the cycle of the virus, we haven’t gained a thing, and, in fact, we may lose a great deal,” he said.

“Everything could go wrong,” she said. “We are asking people to stop taking medical advice from Donald Trump and Betsy DeVos. Really listen to the school nurse, listen to what the infectious disease experts are saying, and, by the way, listen to a school teacher.”

“When we do it wrong, people die.”

Can Trump use the CDC to force schools to reopen?

No. While the administration is pushing hard for schools to reopen, officials have also said implementation decisions have to be made on the local level.

New York Gov. Andrew Cuomo said Wednesday the decision to reopen schools is up to state officials. He made the comments following Mayor Bill de Blasio’s announcement that NYC schools would reopen in September. (July 8)

“None of the CDC’s recommendations are intended to replace state and local rules and guidance,” Vice President Mike Pence told reporters Wednesday.

Pence also said the administration will be “very respectful” of states and communities that “may adjust to either a certain set of days or certain limitations” given their rate of infections.

Likewise, the CDC says its recommendations should be “tailored to the needs of each community” and are meant to supplement, not replace, any state or local rules that schools must follow.

But administration officials are concerned that, instead of using the guidelines to help them reopen, schools will employ them “as a rationale to keep schools closed.” Redfield wanted “to make it very clear” Wednesday that that should not happen.

Can the president influence CDC guidance?

Despite Trump’s distaste for the guidance, Redfield said Thursday on CNN the CDC will not revise its guidance for reopening schools.

This is not the first disagreement between Trump and CDC guidance.

Trump has been vocal about his distrust of mail-in ballots, again, on Twitter.

“Because of MAIL-IN BALLOTS, 2020 will be the most RIGGED Election in our nations history – unless this stupidity is ended,” he wrote.

But CDC guidance on upcoming elections still states that a wider variety of voting options – including mail-in ballots – helps lower risk for infection.

In April, Dr. Rick Bright said he was ousted from his position at the Department of Health and Human Services because he opposed the drug hydroxychloroquine, which Trump was touting.

Have previous presidents been at odds with the CDC?

Yes, for example, during the Reagan administration, the CDC issued recommendations to prevent the spread of AIDS in 1983. By the end of 1984, the disease had already affected at least 7,700 people across the U.S. and killed more than 3,500.

Historians argue that Reagan “all but ignored the epidemic.” According to BBC, the first time the president made a public speech about AIDS wasn’t until 1987.