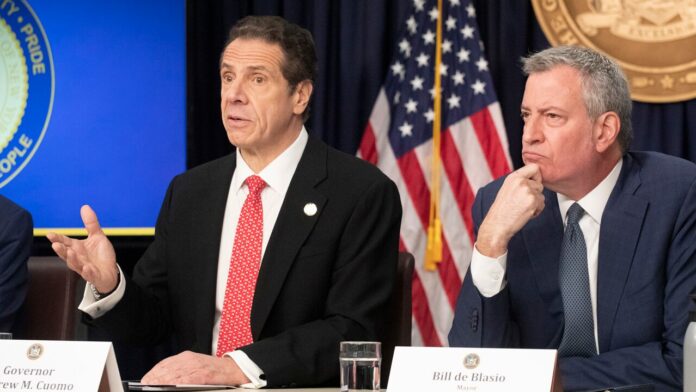 It is political theater at its most flagrant.

The ongoing rivalry between New York City Mayor Bill de Blasio and the state’s Governor Andrew Cuomo has been on full public display throughout the crises of 2020, but their rocky relationship dates back decades — going back to the nineties when they were Democratic allies before things soured in recent years.

Last week, Cuomo took aim at de Blasio and the city council’s moves to cull $1 billion from the New York Police Department amid the unrest following the death of George Floyd while in the custody of Minneapolis police, conjecturing that he didn’t “know what it means.”

The underlying swipe that the financial move heralded by the mayor does nothing but deepen the trust divide between the community and the police came just weeks after Cuomo cautioned that he had the power to “displace the mayor of New York City and bring in the National Guard, and basically take over the mayor’s job” if his colleague failed to curb the looting and destruction that sent the city into its first wave of curfews since WWII.

GIULIANI CALLS ON CUOMO TO REMOVE ‘DISGRACE’ DE BLASIO AS NYC MAYOR: ‘THE MAN SHOULD HANG HIS HEAD IN SHAME’

The bubbling mutual antagonism has been further exposed throughout the coronavirus pandemic, of which New York has been the hardest hit state in the country, so far clocking in more than 420,000 infections and over 32,000 deaths. The acrimony, often played out over press conferences, has ranged from squabbling over when to call for a shelter-in-place, to compulsory mask-wearing, to when to shutter schools and playgrounds, and who has the authority to call the shots.

For one, De Blasio announced in April that public schools would remain closed for the remainder of the school year in the effort to quell the coronavirus spread – only for Cuomo three hours later to refer to it as little more than an “opinion” and hint that a decision had not yet been made by his office.

The quarreling serves as the latest episode in the tit-for-tat that has existed since de Blasio stepped into the mayor’s role in 2014 following his 2013 election, but being on opposing sides of the same Democratic party wasn’t always the case.

Relations between the two New York political figures started back in 1997 when Cuomo served as then-President Bill Clinton’s Housing and Urban Development (HUD) secretary, and hired de Blasio to serve as the regional director of HUD in New York, who thus reported straight to him. De Blasio went on to champion Cuomo’s ultimately unsuccessful campaign for governor, and seven years later, Cuomo’s father, the iconic former governor Mario Cuomo, gave his support to de Blasio.

“While mayors have feuded with governors for years, and there is a natural tension over who has the power to control what, we’ve never had a situation where two men who were such good friends and colleagues have become such bitter adversaries,” Frank Morano, a lifelong New Yorker and veteran radio host, told Fox News. “And part of it is ideological, with DeBlasio being more progressive and Cuomo being more of a Clinton-style Democrat.”

But soon after de Blasio came to be mayor and standing alongside Cuomo – who has held the New York governorship since 2011 – the first public spat surfaced. The new mayor endeavored to tax the city’s richest to fund universal pre-kindergarten across all five boroughs–a campaign promise–drawing a sharp rebuke from the man on the Albany throne who contended that the targeted taxing would only prompt the wealthy to move elsewhere.

And when scores of NYPD officers turned their backs on de Blasio after two of their own were killed in the line of duty in late 2014, Cuomo refused to offer his cohort in City Hall his public support, according to the New York Times. Instead, Cuomo said that he supported both the mayor and the police union chief.

It was in 2015 and the subsequent years that the fracas really hit the stage – ranging from the governor halting the subways amid a snowstorm without informing the mayor’s office to the major announcing that a new rail yard in Queens would be established without getting Albany’s blessing, resulting in the plans quickly been torn up.

De Blasio responded by telling the local press that “if someone disagrees with him (Cuomo), some kind of revenge or vendetta follows.”

That same year, Cuomo moved to rein in the sudden growth of Uber while de Blasio exalted the burgeoning ride-sharing company.

However, Cuomo is said to have managed to talk the mayor into getting him an endorsement from the progressive third-party Working Families Party (WFP) in exchange for offering to abet more of de Blasio’s more left-leaning policies – a pledge that never really came to fruition.

“The relationship has continued to dissipate, and the two have publicly clashed on a variety of issues such as the NYPD, public housing, taxes, homelessness, and mass transit,” noted Ken Mahoney, CEO of Wall Street firm Mahoney Asset Management. “However, there is a clear personal dislike between the two, and their subtle( and not so subtle) press conference comments and lack of public acknowledgment for each other highlights their disdain for each other.”

Much of the sparring has come down to what observers see as silly subjects.

In 2015, Cuomo wanted to clamp down on the growing number of topless women soliciting tourist donations in Times Square with an outright ban, while de Blasio instead set about establishing a task force to get to the root of the issue. The following year, the two leaders fought over euthanizing a deer found on the loose in Harlem. De Blasio authorized the police to carry it out until Cuomo stepped in and declared that the animal would instead be moved. In the end, the deer died due to stress.

A building is defaced with graffiti across the street from an encampment of protesters near City Hall in New York, Tuesday, June 30, 2020. New York City lawmakers are holding a high-stakes debate on the city budget as activists demand a $1 billion shift from policing to social services and the city grapples with multibillion-dollar losses because of the coronavirus pandemic. (AP Photo/Seth Wenig)

And after de Blasio talked to the New York Daily News about his proclivity for taking naps during the day in 2017, Cuomo hit back that he has “never been a napper.”

Cuomo has reportedly held official celebrations without inviting his co-worker in City Hall, and the mayor has gone so far as to accuse his Albany associate of purporting to be some sort of “great white knight.”

But the roots of the seemingly incessant clashing, political analysts observe, stem from both a clash in personality and a differing in ideology despite both figures sitting left of center.

“It is clear that de Blasio is more progressive and left-leaning than Cuomo, who is more moderate than de Blasio. Undoubtedly, their personalities are also very different where Cuomo sees himself as the heir apparent of Hamlet on the Hudson while de Blasio sees himself as a progressive liberal champion of rights,” surmised New York-based attorney Manny Alicandro. “The fact that this feud not only has continued during the COVID-19 pandemic but also that the feud has been so obvious to the public. It seems like Cuomo and de Blasio aren’t even trying to give the appearance that they are working together for the best interests of New Yorkers.”

Indeed, some argue that the ongoing bickering makes both appear petty and stands in the way of helping their very constituents.

According to Mahoney, “Cuomo is a hard-hitter from Queens who will take on anyone, but de Blasio has a less serious style which evolves from his Brooklyn roots.

“The conflict is severely punishing New Yorkers, and their pathetic public arguments are taking the focus away from serious issues that are literally a matter of life or death for many New Yorkers,” he charged. “The poor handling of the Coronavirus outbreak has left over 17,500 New Yorkers dead, and with the local economy in serious distress, our leadership should be coming together, not butting heads.”

Yet others argue that a little healthy competition between the two actually does more good than harm.

“This is the old Democratic Party fight for dominance. Competition is good between the two and helps New Yorkers. Both the mayor and the governor have been trying to impress voters, resulting in the Governor paying more attention to NYC and bringing funding issues into a more intense spotlight,” added Scott Sobel, the senior vice president of crisis and litigation at public affairs firm kglobal. “And, the mayor is expanding his long-armed reach outside of the City needling the governor to up his game.”