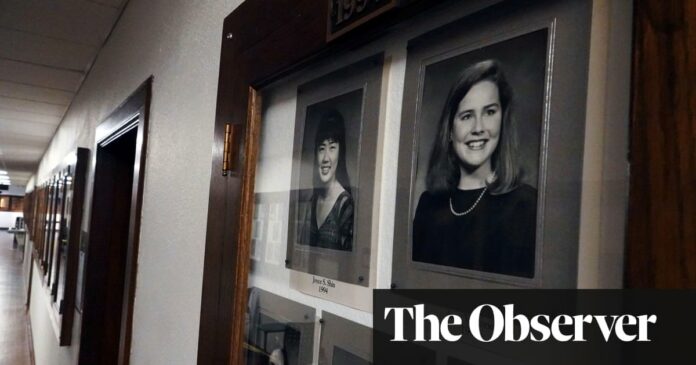 Donald Trump’s expected nomination of Amy Coney Barrett to the supreme court, to replace Ruth Bader Ginsburg, is drawing attention to a secretive Catholic “covenant community” called People of Praise that counts Barrett as a member and faces claims of adhering to a “highly authoritarian” structure.

The 48-year-old appellate court judge has said she is a “faithful Catholic” but that her religious beliefs would not “bear in the discharge of my duties as a judge”.

At the same time, the Louisiana native and Notre Dame Law graduate, a favorite among Trump’s evangelical Christian base, has said legal careers ought not to be seen as means of gaining satisfaction, prestige or money, but rather “as a means to the end of serving God”.

Interviews with experts who have studied charismatic Christian groups such as People of Praise, and with former members of the group, plus a review of the group’s own literature, reveal an organization that appears to dominate some members’ everyday lives, in which so-called “heads” – or spiritual advisers – make big life decisions, and in which members are expected to financially support one another.

Married women – such as Barrett – count their husbands as their “heads” and all members are expected to donate 5% of their income to the organization.

Some conservative and progressive activists have said any discussion of Barrett’s faith is inappropriate in the context of a Senate confirmation to assess her judicial qualifications, and potentially reflects anti-Catholic bigotry.

Other Catholic writers have said it is fair to scrutinize People of Praise because the group falls far outside mainstream Catholicism.

Barrett has not publicly discussed her affiliation but her connection was reported in multiple media accounts at the time of her confirmation to an appellate court in 2017.

Her picture appears in a May 2006 edition of People of Praise’s magazine, which documents her participation in a Leaders’ Conference for Women. Her father and her husband, Jesse Barrett, are also known members.

The group emerged out of the Catholic charismatic movement of the late 1960s, which blended Catholicism and Protestant Pentecostalism – Catholics and Protestants are both members – and adopted practices like speaking in tongues. The group’s literature shows communal living is also encouraged, at least among unmarried members, as is the sharing of finances between households.

A July 2007 “our money our selves” edition of People of Praise’s Vine & Branch magazine included an article about a 17-member group of women described as “single for the Lord” and living together in South Bend, Indiana. The women shared a “sisterhood budget”, which involved them pooling their paychecks while a “head of the sisterhood” determined, with the sisters’ input, how the money was spent.

“If one of us has a need, we’ll pay for it,” one woman named Debbie was quoted as saying. “But we also work hard to distinguish between our needs and our wants.”

The “sisterhood” is described as living “simply, frugally, and generously”, with about $36 put aside per week per person for food and dry goods and $10 for pocket money to buy “Slurpees and movie tickets”. They buy clothes at thrift stores and garage sales and 10% of their income is directed to People of Praise.

The article quotes a head sister named Nano as saying: “If each of us had her own money, it would change everything. Just as we would have our own shelf in the refrigerator, so we would probably partition off other parts of our lives and be more guarded in certain areas. Having money in common moves you to put everything in common.”

Adrian Reimers, a former member turned critic of the group, described in a book available online called Not Reliable Guides his “grave concern” about how the life of People of Praise members were “not his or her own” and how “all one’s decisions and dealings become the concern of one’s head, and in turn potentially become known to the leadership”.

Reached by the Guardian, Reimers said he did not want to discuss the matter further.

Writing for Politico, Massimo Faggioli, a historian and theologian at Villanova University, said there were “tensions” between serving as a supreme court justice, one of the final interpreters of the US constitution, and swearing an oath to an organization he said “lacks transparency and visible structures of authority that are accountable to their members, to the Roman Catholic church, and to the wider public”.

“A lot of what goes on in People of Praise is not that different than what goes on in a lot of rightwing or conservative Catholic circles,” said Heidi Schlumpf, a national correspondent for National Catholic Reporter, which reports on the church.

“Whether People of Praise rises to the level of cult, I am not in a position to make that judgment. But there is a level of secrecy that was concerning, and there was a level of reports by people who left the organization of authoritarianism that [is] concerning as well.”

‘Neither an oath nor a vow’

People of Praise is headed by an all-male board of governors described as its “highest authority”.

On its website, the group, which was founded in South Bend in 1971 and has 1,700 members, describes itself as a community that “shares our lives together” and “support each other financially and materially and spiritually”.

“Our covenant is neither an oath nor a vow, but it is an important personal commitment,” the website says. “We teach that People of Praise members should always follow their consciences, as formed by the light of reason, and by the experience and the teachings of their churches.”

A spokesman did not immediately respond to requests for comment about allegations of authoritarian structure or why the group has been described as a cult by some former followers. The spokesman directed the Guardian to the website and said he was being inundated with media requests from all over the world.

Financial records previously submitted to Congress show Barrett served as a trustee for the Trinity School at Greenlawn, a private Catholic school affiliated with People of Praise, from 2015 to 2017. A parent handbook describes the school’s commitment to the establishment of “Christian relationships” that adhere to “scripture and Christian tradition”.

“We understand marriage to be a legal and committed relationship between a man and a woman and believe that the only proper place for sexual activity is within these bounds of conjugal love,” the handbook says, emphasizing that any sex outside of marriage – whether gay or straight – is not in keeping with “God’s plan for human sexuality”.

Students who experience same-sex attraction, the handbook says, ought not to “prematurely interpret any emotional experience as identity-defining”.

“We believe that such self-identification at a young age can lead to students being labeled based solely upon sexuality, generate distraction, create confusion, and prevent students from experiencing true freedom within the culture of the school,” the handbook says.

While the school’s objection to gay marriage and attraction is in line with mainstream Catholic teaching, the handbook also actively discourages teenage students from forming “exclusive relationships”, and asks them not to “be exclusive or give evidence of their dating relationships while at school”.

While the handbook does not describe its objection to such relationships, one expert who asked not to be named, because they had already received online abuse for speaking critically about People of Praise, said it revealed the importance the group put on the concept of community, rather than individual relationships.

“It’s typical of these charismatic communities that friendship is seen as a danger to the community,” the person said. “That’s normal.”

Teachers who apply for jobs at any schools affiliated with People of Praise are told, according to an online application, that they need to adhere to a “basic code of Christian conduct”.

‘A grave violation of religious freedom’

Democrats will likely be most concerned about Barrett’s views on abortion and the Affordable Care Act, the Obama-era law that extended health insurance to millions of Americans.

The letter Barrett signed said: “The simple fact is that the Obama administration is compelling religious people and institutions who are employers to purchase a health insurance contract that provides abortion-inducing drugs, contraception and sterilization. This is a grave violation of religious freedom and cannot stand.”

If she is confirmed before the November election, one of Barrett’s first cases could determine the fate of the Affordable Care Act.