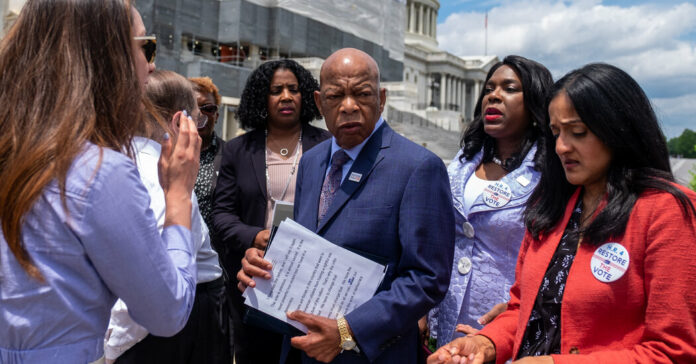 WASHINGTON — Senator Mitch McConnell took to the Senate floor Monday to lament the death of Representative John Lewis, a civil rights icon whom the Republican leader called a “monumental figure” who made “huge personal sacrifices to help our nation move past the sin of racism.”

While many Democrats welcomed the tribute, they immediately pressed for more than just reverent words: If Mr. McConnell and Republicans really wanted to honor Mr. Lewis, they argued, they should agree to restore the voting rights protections that were the cause of his life, which were stripped away by the Supreme Court seven years ago.

The death of Mr. Lewis, who was brutally beaten in 1965 while demonstrating for voting rights in Selma, Ala., has renewed a push by Democrats and civil rights activists to reauthorize the Voting Rights Act, a move that Republicans have steadfastly opposed, and name it in his honor.

“The law he nearly died for has been gutted by the Supreme Court,” Senator Charles Schumer, Democrat of New York and the minority leader, said Monday on the Senate floor. “Congress has the power to restore it. But only one party seems interested in doing so.”

Ever since the Supreme Court in 2013 invalidated key aspects of the Voting Rights Act — allowing states, mostly in the South, to change their election laws without advance federal approval — Democrats and voting rights advocates have been trying to persuade Congress to pass legislation to restore the protections for Black voters at the polls.

“Mitch McConnell just spoke on the Senate floor about John Lewis (and quoted Dr. King) but said nothing about restoring the Voting Rights Act or taking any action to honor his legacy,” Vanita Gupta, the chief executive of the Leadership Conference on Civil and Human Rights, wrote on Twitter.

At the heart of the dispute is the question of whether Black voters continue to face barriers to voting in states with a history of discrimination. Most Republicans including Mr. McConnell argue that such obstacles no longer exist. But Democrats and civil rights advocates contend that while most overt discrimination — such as poll taxes and literacy tests — are gone, it has been replaced by stricter voting laws and other tactics that have the effect of disenfranchising Black voters.

Ms. Gupta’s organization says it identified 1,688 polling place closures between 2012 and 2018, and that such closures are most likely to make ballot access more difficult for Black voters. A full-scale voting meltdown last month in Georgia’s statewide primary election, in which predominantly Black areas experienced some of the worst problems, raised new concerns about racially discriminatory voter suppression.

But in a 2013 decision that reflected its ideological split, the Supreme Court said that key sections of the statute were unconstitutional and based on antiquated data. If Congress wanted to continue to impose federal oversight on states where voting rights were at risk, the court said, it must pass legislation that would do so based on contemporary data.

Last year, the Democratic-led House did just that.

In December, the House voted to reinstate federal oversight of state election law, moving to bolster protections against racial discrimination enshrined in the 1965 Voting Rights Act. Mr. Lewis presided over the passage of that bill.

That followed passage in March 2019 of the Democrats’ showcase anti-corruption legislation, which also included measures that aimed to dismantle barriers to the ballot box.

“You know that our work is far from finished,” Mr. Lewis said in arguing for the bill’s passage at the time. “It makes me sad. It makes me feel like crying when people are denied the right to vote.”

Both bills have run into a brick wall in the Senate.

Mr. McConnell has said he doesn’t believe Black voters still face voter suppression efforts, and therefore there is no longer a need for Congress to impose federal oversight on local election decisions. He has argued other aspects of the Voting Rights Act remain in effect, and noted that turnout among Black voters has been up in some recent elections.

“There’s very little tangible evidence of this whole voter-suppression nonsense that the Democrats are promoting,” Mr. McConnell told The Wall Street Journal in a recent interview. “My prediction is African-American voters will turn out in as large a percentage as whites, if not more so, all across the country.”

“As author and chief sponsor of the Senate bill I will be reintroducing #VRAA this week, naming it for John Lewis, my longtime partner on this,” Mr. Leahy wrote on Twitter.

Representative Steny H. Hoyer, Democrat of Maryland and the majority leader, told reporters on Tuesday that House leaders hoped to have a bill together by the end of the week combining a fix to the Voting Rights Act with new funds to support local election officials and make balloting more accessible.

The House has already passed similar provisions individually, but the idea would be to unite them in a single measure named for Mr. Lewis.

“There can be no greater tribute to John Lewis than having a bill passed that protects and affirms the right for which he worked all his life,” Mr. Hoyer said.

Mr. Lewis, who was known as the “conscience of the Congress” for his moral authority acquired through years of protest for racial equality, died on Friday. He announced late last year that he had Stage 4 pancreatic cancer.

Speaker Nancy Pelosi said in television interviews on Monday that the Senate should pass a bill bearing Mr. Lewis’ name.

On the floor of the House, Representative Al Green, Democrat of Texas, who was twice arrested while protesting alongside Mr. Lewis, called on the Senate to take up the legislation.

“It seems to me it would be proper, appropriate and befitting of this body and all of Congress to now pass the reformation of the Voting Rights Act so that we could show the world that voting is still important to all people in this country,” Mr. Green said.

Ms. Pelosi said she would be waiting until after the funeral of a fellow civil rights legend to announce plans for how Congress would honor Mr. Lewis. Supporters of Mr. Lewis have urged for him to receive the honor of lying in state, while respecting health restrictions concerning the coronavirus pandemic.

“When our beloved John Lewis left us on Friday evening, he did so with the respect and gratitude of our entire country,” Ms. Pelosi wrote in a letter to colleagues on Monday. “That same day, Rev. C.T. Vivian, another giant of the civil rights movement, made his passage. Rev. Vivian’s services will be held on Thursday. Out of respect for Rev. Vivian, the Lewis family wants to wait until after his services to announce their plans for John’s farewell.”