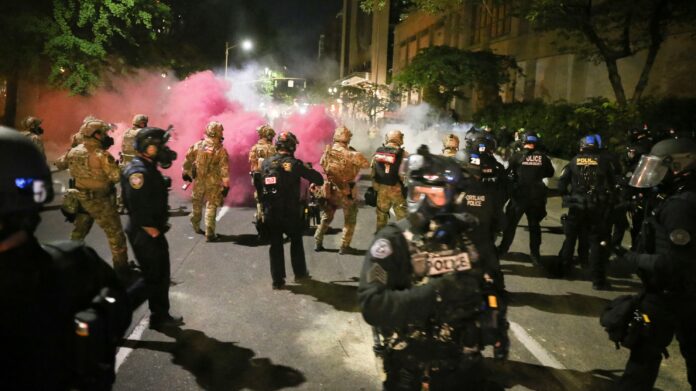 Video from Portland, Oregon on Sunday night showed demonstrators crowded around the federal courthouse building. Eventually, authorities rushed the crowd amid explosions and gas, as demonstrators could be seen running away. (July 20)

A predominantly white city tucked away in the northwest corner of the U.S. hardly seems the logical spot to emerge as the new flash point of the protests against racism and police brutality that have raged across the country for nearly two months.

Then again, both Portland and its home state of Oregon have a troubled past that animates the ongoing demonstrations, now in their eighth week.

Add to that a president sinking in the polls and eager to rally his base behind a vow to “dominate the streets’’ in an election year, and suddenly Portland has been thrust into the national spotlight for something other than quirkiness.

Experts say the unrequested and unwelcome arrival of federal law enforcement agents in recent weeks and their violent recent confrontations with protesters in the city’s downtown have rekindled a movement that had been simmering down.

The Oregonian/OregonLive reported more than 2,000 people, many of them belonging to parent groups, turned out to protest against the federal intervention Monday night and into Tuesday morning. The officers guarding a federal courthouse eventually responded with gas and less-lethal munitions during a midnight confrontation that lasted nearly an hour, the news outlet said.

Oregon’s governor, U.S. senators and numerous other elected officials have demanded the federal agents be withdrawn, deeming their deployment an infringement on the state’s rights and a blatant political maneuver by President Donald Trump.

“I think Trump wants to have this open and showy use of force,’’ said Joe Lowndes, a professor of political science at the University of Oregon. “In terms of a flagging presidential campaign, this is the way to fire up his base. It’s not as if they’re doing this on the sly. I think it’s meant as a very public show of – the term he would use is ‘dominance.’’’

For as much outrage and questions of constitutionality as the federal action in Portland has evoked, the longstanding demonstrations that began in the city shortly after the May 25 killing of George Floyd by Minneapolis police are more rooted in the state’s racist history than on recent events.

Oregon’s territorial constitution adopted in November 1857 – less than two years before it became a state – barred people of color from coming within its borders. It wasn’t until 1926 that the provision was repealed. Oregon imposed a tax on people of color in 1862, and racial exclusion laws and bans on interracial marriages were on the books for decades, the latter until 1951.

“That kind of set the template for what, many decades to come afterward, forms the racial exclusion, anti-Black hostility, housing covenants in Portland, Eugene and other cities that make it difficult for Black people to move in and work in Oregon,’’ Lowndes said. “It’s a white state by design.’’

According to a 2019 estimate by the U.S. Census Bureau, 87% of Oregon’s population of 4.2 million is white, and only 2% Black. Portland is not much more diverse, with whites making up 77% of its population of 655,000, and Blacks 5.8%. Latinos account for 9.7% of the total and their growing presence has evoked some resentment.

Christopher McKnight Nichols, who teaches history at Oregon State University and splits time between the school’s base in Corvallis and Portland, said the long trail of discrimination in Oregon informed the protests in a liberal city long known for its activism.

But he said they had tapered down, describing them as “peaceful, benign and boring’’ – until the feds took action. His comment was echoed by Oregon Gov. Kate Brown, who told PBS the actions of “Trump’s troops’’ were “simply like pouring gasoline on a fire.’’

Nichols said a fellow history professor from another college, Maureen Healy, was hit while near the moms’ group by one of the rounds fired by federal agents Monday night.

“There had been local activists who kept the fire burning, and now with the federal agents coming in, we’ve seen a reignition of the fire,’’ Nichols said. “I mean that both literally in terms of the unfortunate violence, but also figuratively because people are getting more excited and enthusiastic.’’

Nichols also pinned much of the blame for the continued animus from the crowds on heavy-handed tactics by the police department, which he said has a culture influenced by racism even though two of its last three chiefs – including the current one, Chuck Lovell – have been Black.

The department has drawn intense criticism for its use of tear gas, high-decibel alarms and projectiles in handling demonstrations. The department has also endured a startling amount of turnover at the top. In early June, Lovell became its third police chief in less than six months.

On Saturday, protesters lit a fire and sprayed graffiti on the building of the police union, which has been accused of obstructing reforms.

“Most protesters would tell you that the Portland Police Bureau has continued to exacerbate tension, that their escalation has been a big part of why that activism and protests have continued,’’ Nichols said. “And one more thing that’s really alarming is Portland police are now back doing more of this kind of escalation, almost keeping up with the Joneses of the federal forces in there.’’

Both professors pointed out the heated clashes with police and/or federal agents are limited to a small part of downtown, in contrast to statements by Chad Wolf, Acting Secretary of the Department of Homeland Security, that Portland is “under siege’’ by “violent anarchists.’’

The city of Portland has been under siege for 47 days straight by a violent mob while local political leaders refuse to restore order to protect their city. @DHSgov stands ready to assist to bring this violent activity to an end. https://t.co/TgqY6yqFM1

The academics also said the demonstrations have broad-based support in Oregon’s largest city, but some believe that’s not nearly enough to heal the deep wounds inflicted by decades of discrimination.

Bobbin Singh, executive director of the Oregon Justice Resource Center – a nonprofit that provides legal services to people who have been impacted by the criminal justice system – said the state will have to confront its history of injustice to overcome its “original sin’’ of white supremacy.

That goes beyond anything that’s happening in the streets of Portland now.

“It’s very easy for people to say, ‘Trump is to blame,’’’ Singh said. “But unless Oregon engages in self-reflection and actually understands how all these systems have been complicit in sustaining white supremacy … we’re never going to be able to move forward.’’

Even though Oregon is led by a Democratic governor and legislature, a white nationalist ideology remains prominent, said Singh, whose organization is involved in litigation against the city of Portland and its police department. Experts say the Ku Klux Klan is still active in Oregon, and so are far-right groups like the Proud Boys and Patriot Prayer.

The latter is based in the Portland area, which doesn’t exactly bring to mind the comically progressive ethos depicted in the TV show “Portlandia.”

“Oregon is unique in that it’s viewed as being left of center, progressive, but when we really look at all this racial justice stuff, we are as bad as any other state you would stereotype from the South, or that have all these long historic racial justice problems that are better known,’’ Singh said. “But Oregon has this very dark history the country doesn’t know.’’

With the continuing protests and the attention they’ve drawn, that history is coming to light.