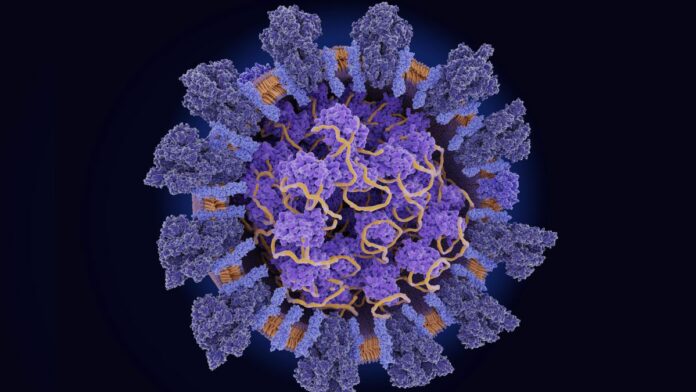 The novel coronavirus uses its spike protein (dark blue) to infiltrate host cells, whose machinery it uses to replicate its RNA (yellow).

A mutation in the protein that allows SARS-CoV-2 to enter cells might make it easier for the virus to spread — or it might not make a difference at all.

That’s the crux of a debate over a mutation known as D614G, which affects the spike protein on the virus’ surface. The mutation is not new. It appears in low levels in samples taken from COVID-19 patients as far back as February. But this variation of the virus (nicknamed the “G” variation) seems to show up in more and more of the virus samples taken from people infected recently compared to early in the pandemic.

A new paper, published July 2 in the journal Cell, argues that the rise in the “G” variation of the new coronavirus is due to natural selection. The study finds that virus particles with this mutation have an easier time making their way into cells, suggesting that it is outcompeting other strains of the virus to become the dominant version of SARS-CoV-2. Other, not-yet-published experiments have found similar results. However, some researchers are not yet convinced that the mutation has any real-world impact on coronavirus transmission at all. Instead, it’s possible that the G variant’s spread is due to chance, said Nathan Grubaugh, an epidemiologist at the Yale School of Medicine who co-authored a commentary accompanying the paper’s publication.

Original samples of the novel coronavirus out of Wuhan, China, were a variation that scientists now call the “D” clade. Before March 1, more than 90% of viral samples taken from patients were from this D variation. Over the course of March, G began to predominate. This mutation is caused by the swapping of an adenine (A) nucleotide to a guanine (G) nucleotide at a particular spot in the coronavirus genome. It always appears alongside three other mutations that similarly swap one building block of RNA for another. (The letters in RNA help code for the proteins the virus makes once inside a cell.)

The G variant represented 67% of global samples taken in March, and 78% of those taken between April 1 and May 18. During this time, the locus of the outbreaks shifted away from China into Europe and the United States.

The mutation piqued interest because it seemed to take over even in areas were the D variation had initially held sway, said Bette Korber, the lead author of the new Cell paper and a computational biologist at Los Alamos National Laboratory in New Mexico. She and her colleagues at Duke University and the La Jolla Institute of Immunology in California inserted the G mutation and D mutations into pseudoviruses, which are viruses engineered to display the surface proteins of other viruses. Pseudoviruses are useful, Korber told Live Science, because they can’t spread disease and because they contain molecular tags that researchers can use to track their movement into cells.

The pseudoviruses and cells used in the experiment were neither real coronavirus nor human lung cells, but another study that used infectious SARS-CoV-2 virions reached similar findings. That study, which was published July 7 to the preprint server bioRxiv and has not yet been peer-reviewed, was spearheaded by biologist Neville Sanjana at New York University. He and his colleagues tested the G and D versions of SARS-CoV-2 in cell cultures, including human lung cells, and found that the G variant infected up to eight times more cells than the D variant.

But just because a virus is better at infecting cells in a lab culture doesn’t mean it will be more transmissible in the real world, Grubaugh said. “If it just takes it [a] few more hours for the other variant to do the exact same thing, then the outcome essentially is the same,” he told Live Science. And entering cells is just one part of the equation. There are many factors that affect transmissibility, he said, such as how efficiently the virus leaves the body and how stable it is in the outside environment as it awaits a new host.

Some clinical work has suggested that the G variant’s apparent advantage might hold outside of the Petri dish. A study, posted May 26 to the preprint database medRxiv, also not yet peer-reviewed, led by Northwestern University Feinberg School of Medicine researchers Dr. Egon Ozer, Judd Hultquist found three distinct versions of SARS-CoV-2 circulating in Chicago in mid-March. Some matched the dominant version circulating in New York City, some matched the predominant version from the West Coast, and some seemed most closely related to the original samples from China.

“The virus kind of came both ways around the globe and smacked into Chicago and we got virus originally from China, we think thanks to O’Hare being such a transportation hub,” Hultquist told Live Science.

The New York clade, which contained the G mutation, was linked to a higher viral load in the upper airways than the virus that was closer to the original China strain, the researchers found. Researchers in Washington state have released similar findings. If the results hold up, they could hint at increased transmission, because higher levels of virus in the upper airways might translate to more virus emitted when people breathe and talk, Ozer told Live Science. But it’s impossible to say for sure, he said. Scientists don’t even know how many virions a person needs to come into contact with to get infected, so it’s not clear if the extra viral load makes a difference.

It’s possible that the G mutation in the coronavirus’ spike protein is, indeed, giving it some kind of transmissibility advantage over other strains of the virus, Grubaugh said. But it’s not yet proven. The G variant also could have taken over the world by pure luck, not by evolutionary fitness. That’s due to something that epidemiologists call “founder” effects.

“If this virus got into a population of people that had a lot of connectivity, essentially like a super spreader event, then just because that was the founder in that population, it could spread really quickly,” Grubaugh said.

How might this have worked for the G mutation? The strain had the good fortune to land in Europe, where major outbreaks infected many people. From there, it got even luckier, landing in the globally connected hub of New York City. The outbreak in New York seeded many of the outbreaks in the rest of the United States, including many places where the virus is now running essentially unchecked.

“What’s going to be important now is to continue to monitor in these places,” Grubaugh said. If the G variant continues to dominate even in places where both the G and D versions are present, that might be a sign that the G mutation does provide the virus a transmission advantage.

The G614 mutation is part of a cluster of four mutations that appear together, Korber said, so more work needs to be done on what the other three mutations might do. Another important line of work will be testing the genetic variants in animal models that better mimic human transmission. Scientists are working with a number of animals, from ferrets to Syrian hamsters to macaques, to study the coronavirus, but they haven’t yet established which animals best represent how the disease spreads from human to human. (Hamsters and ferrets catch influenza much like humans, so scientists hope that they might also be a good animal model for coronavirus spread.)

The good news is that so far, there is no evidence that the G variant causes more severe disease than any other version of the coronavirus, nor does the mutation appear likely to affect the process of vaccine development, researchers agreed. But the findings indicate that it’s important for scientists to keep track of the virus’ mutations as it spreads. As the virus interacts with more and more immune systems, it will experience more evolutionary pressure and may continue to change, Ozer said.

“We have seen that in the course of one month, a particular form of the virus can go from being very rare to the globally most common form,” Korber said. “It could happen again.”

For the general public, the advice hasn’t changed: Social distancing and wearing masks are still the best practices, post-lockdown, Korber said. The mutation is here to stay, Grubaugh said, and what it does for the virus is probably less important now than what people do.

“There are so many other more important things to worry about right now than this mutation,” he said. “We can’t even get a handle on testing, we don’t have effective control measures really at all right now… If we keep allowing opportunities for the virus to have a new host, then it’s going to keep on spreading, regardless of if it’s a more fit variant or not.”